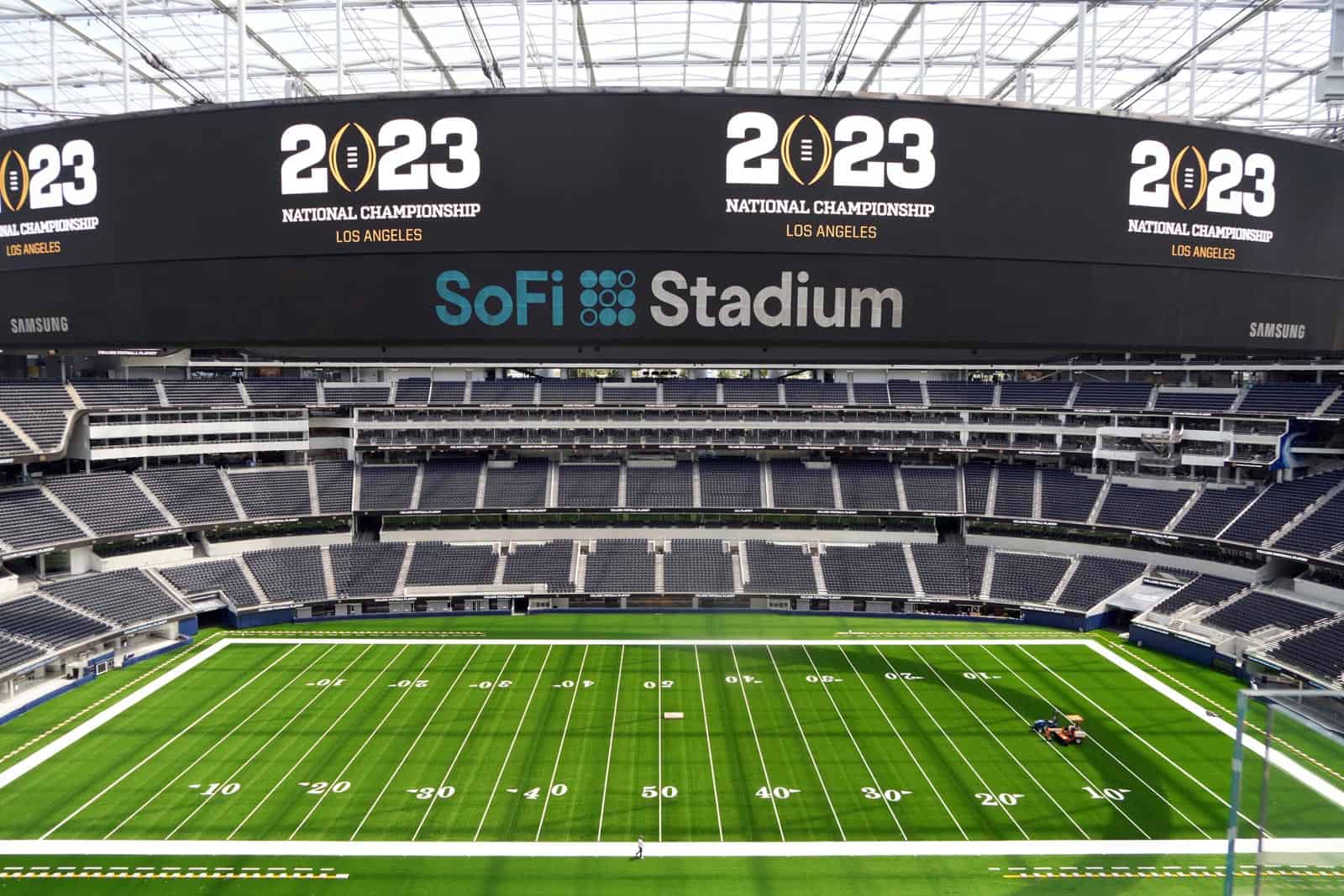 After what must be considered the best Semifinal offering in the nine-year history of the College Football Playoff, it’s time for Championship Monday.

TCU has two claimed national championships but hasn’t won the whole enchilada in 85 years, or since 1938 when it went 11-0 with Heisman winner Davey O’Brien under center. The only other national title came in 1935, a 12-1 product which ended with a 3-2 win over LSU in the Sugar Bowl.

Georgia has three claimed national championships, winning as recently as last season, downing (2) Michigan 34-11 in the CFP Semifinal at the Orange Bowl and then upending (1) Alabama 33-18 in the title game. Prior to that it was 1980, a 12-0 season with Vince Dooley on the sidelines and Herschel Walker in the backfield. The first-ever title came during WWII, an 11-1 campaign that wrapped up with a 9-0 shutout of (13) UCLA in the 1942/43 Rose Bowl.

A rematch of the 2016 Liberty Bowl and the 1941/42 Orange Bowl, TCU and Georgia have met four times previously with the Bulldogs winning on every occasion.

On paper, Georgia is the better team, especially so from a defensive standpoint. Where the Bulldogs are ranked No. 11 nationally in total defense and No. 5 in points allowed, TCU is No. 78 and No. 65, respectively. It’s a statistical fact that needs to be quantified by pointing out another truth – the Horned Frogs’ D is more battle tested. Where only seven of UGA’s 13 FBS opponents – or 53 percent – are ranked in the top half of the nation in total offense, 11 of TCU’s foes – or 84 percent – are so ranked with four earning Top 25 marks.

But wait! There’s more. While seven of both Georgia and TCU’s 13 FBS opponents finished 2022 with winning records, the Bulldogs played six opponents that were ranked in the final CFP Top 25 vs. the Horned Frogs’ mere three.

These two facts are just the tip of the iceberg in illustrating how TCU vs. UGA is not, and I repeat, not an Apples vs. Apples comparison. Taking that tact, instead of trying to make the two very different fruits seem similar, let’s look for each team’s potential weaknesses by examining the common threads in the games where each club almost lost/did lose in 2022.

(1) Struggling to stop the run. The Horned Frogs’ defense only allowed 200-plus yards twice this season, low points that, not surprisingly, occurred in the one-point decision at Baylor (a season-high 232-yard day for the Bears) and vs. (9) K-State (205 yards) in the Big 12 Championship. On the plus side, in its most recent outing TCU held the No. 5 ranked rushing attack in America – (2) Michigan, averaging 239 yards per game – to 186 in the Semifinal.

Georgia’s offense is ranked No. 23 nationally in rushing, averaging 202 ground yards per game. It posted 130-yards plus in all 14 of its outings this season and went over the 200-yard mark on seven occasions.

(2) More than 35 pass attempts. TCU, which averaged 30.8 pass attempts per game, only threw the ball 35-plus times on three occasions in 2022: 36 in both the one-point win at Baylor and the loss to (9) K-State in the Big 12 title game and a season-high 40 in the three-point win vs. Oklahoma State. It’s no surprise that the fewest rushing attempts (27) and the fewest rushing yards (115) came in the last-second win in Waco.

(3) Missed kicks. Horned Frogs’ senior PK Griffin Kell (#39) only missed four kicks vs. FBS opponents this season. While the failed extra-point attempt in the 55-24 win over Oklahoma wasn’t costly, the other missteps were crucial. First was the missed 34-yard field goal attempt early in the game at (20) Texas, which would have cost TCU the game if the Longhorns could have managed just one second-half TD in the 17-10 win. Next came the missed extra point in the third quarter of the game at Baylor, which, had it been successful would have put the Frogs up by seven coming into the final quarter. Finally, was the missed 55-yarder in the Big 12 title game vs. (9) K-State, which, if made, would have been the tying score in what ultimately was a 31-28 loss, the only of the season.

One of the biggest negative takeaways in the Frogs’ win in the Semifinal was that they coughed up 342 passing yards – the third most of the entire season – to a (2) Michigan offense averaging 220, the third fewest of any offense TCU faced this year. It’s a scary proposition vs. a Georgia attack ranked No. 15 nationally in passing, averaging 293 yards per game – aka the third most lethal attack the Frogs’ defense has squared off with.

(1) An inability to score touchdowns in the red zone. On average, the Bulldogs’ offense scored six points 67.5 percent of the time within opponents’ 20-yard lines, a number that rose to 74.1 percent in its ten biggest wins over FBS clubs and plummeted to an average of 42.2 percent in their three nearest misses. Included were the two worst performances of the season, a 40 percent day at Mizzou and a dismal 20 percent success rate at Kentucky.

TCU’s defense allowed a touchdown 61.5 percent of the time in the red zone (No. 72 in the FBS) a number that fell slightly, to 57.1 percent, in the win over (2) Michigan in the Semifinal game.

(2) Allowing 100-plus rushing yards. Georgia is ranked No. 1 in the FBS in rush defense, giving up only 79.9 yards per game. It’s no coincidence that two of the only three times it allowed 100-plus ground yards came in two of the nearest misses: 102 yards at Missouri and a season-high 119 vs. Ohio State.

TCU is ranked No. 20 in the nation in rushing offense, averaging 205 yards per game. It hung up 115-plus ground yards on all 14 of its opponents this season including posting six 200-plus yard games. Its 263-yard day vs. (2) Michigan’s D (ranked No. 7 in the FBS vs. the run) was the most ground yards the Wolverines allowed this season.

(3) A struggle to convert third downs. The Bulldogs’ offense successfully converted 49.7 percent of its third-down tries this season, the eighth-best mark in the FBS. Again, it’s no happenstance that its very worst performances on third down came in two of its closest calls – a 4-for-13 (30.7 percent) day at Missouri and converting a season-low 2-for-12 (20 percent) vs. (4) Ohio State.

If Georgia wins, has there ever been another team to beat a member from each Power 5 conference in the same season? Nine S.E.C. teams, Oregon of the Pac 12, Georgia Tech of the A.C.C., Ohio State of the Big Ten, and then T.C.U. from the Big XII.