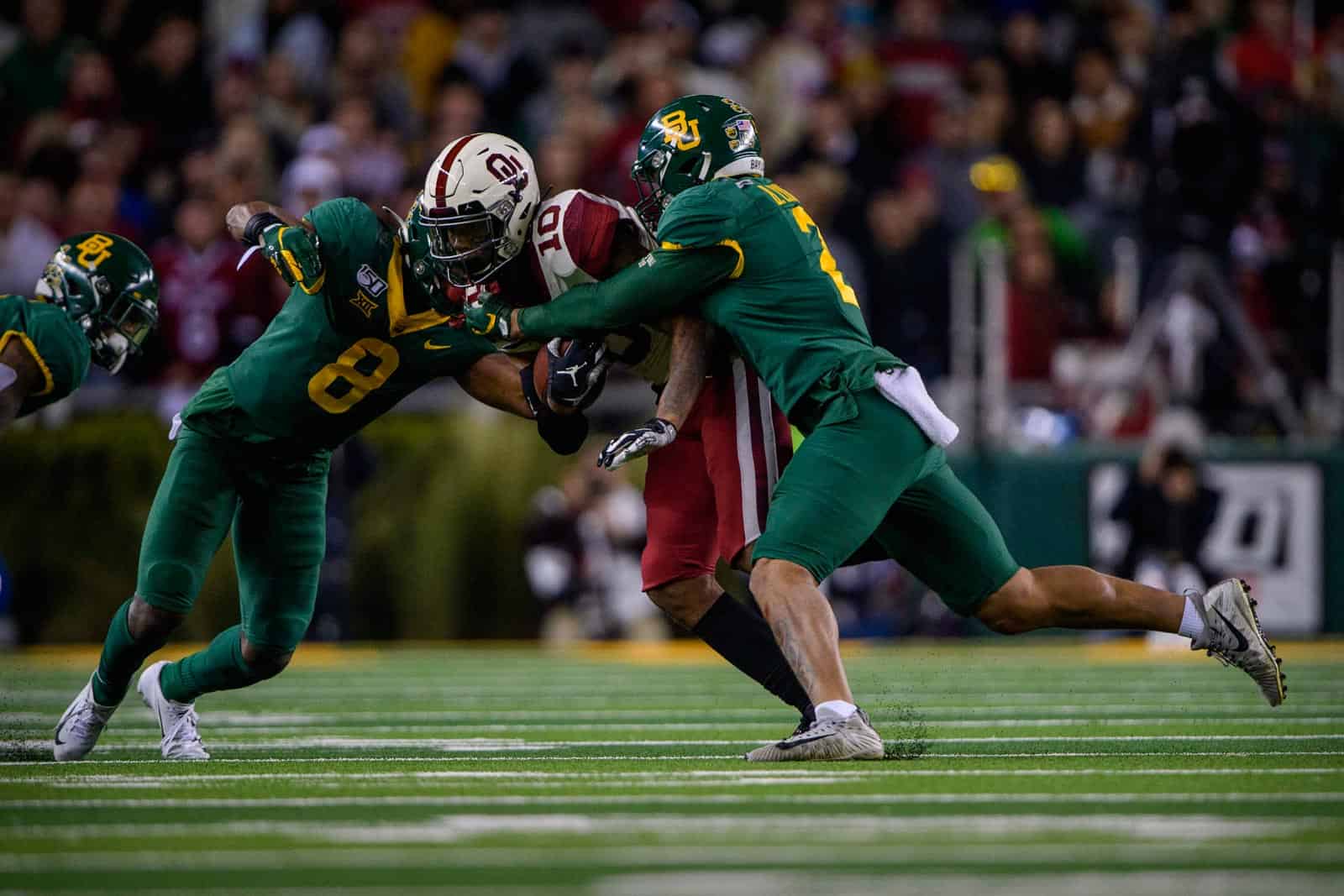 With ten title games in 24 hours, conference championship weekend is the most meaningful stretch of the college football season.

The action kicks off on Friday night with the Pac-12 Championship at 8pm EST on ABC.

Saturday is an all-day, nine-game marathon that kicks off with a trio of contests at noon EST: The Big 12 championship on ABC, the Sun Belt title game on ESPN, and the MAC championship on ESPN2. Don’t forget to keep an eye out for the C-USA championship which starts up at 1:30pm EST on CBSSN.

In the mid-afternoon slot it’s the American Athletic showdown at 3:30pm EST on ABC, the SEC championship at 4pm EST on CBS and the Mountain West title tilt at the same time over on ESPN.

Primetime features two matchups, both worth programming your remote for: The ACC title game airs at 7:30pm EST on ABC while the Big Ten championship kicks off 30-minutes later – at 8pm EST – on FOX.

What follows is a blow-by-blow guide of when to watch, what to watch for and who to watch doing it. The chef’s recommendation is that it’s consumed in small, digestible bites as needed rather than all at one sitting.

Oregon has won 11 conference titles, four as members of the Pacific Coast Conference and seven in the Pac-10/12, most recently in 2014.

Utah has 24 total conference titles but has never won the Pac-12 (it joined in 2011). It most recently won the Mountain West championship in 2008.

Oregon and Utah have met 32 times previously, the Ducks lead 22-10 but the Utes won the most recent meeting last season in Salt Lake City. This is the first-ever postseason meeting between the two.

What’s powered Utah’s first 11-win season since 2008 is a blistering defense – ranked No. 3 in scoring, No. 1 vs. the run and No. 14 against the pass. The Utes have allowed only 11.3 points per game, sandwiching them between Georgia (10.4) and Ohio State (11.8). It sets up for a compelling matchup vs. Oregon and its No. 16 ranked scoring offense, averaging a cool 35.8 points per game. What may decide this one is how well the Ducks’ secondary plays against Utah’s passing attack. While the Utes are more effective running the ball, Oregon’s rush defense is stiff (No. 10 in the nation) while its pass D is No. 64 – coughing up a season-high 408 air yards in its costly loss at Arizona State.

Baylor has nine total conference titles – seven in the old Southwest Conference and two in the Big 12, most recently in 2014.

Oklahoma has 48 total conference championships and has won 12 titles since the Big 12 was formed in 1996 including winning the last four consecutive crowns.

The two programs have met 29 times previously, Oklahoma leads 26-3 and has won five-straight. This is the first time the two have ever met at a neutral site and the first time they’ve played outside of the regular season.

Despite playing in the yard-happy Big 12, Baylor has managed to earn a stellar No. 13 national ranking in scoring defense this season, giving up an average of only 18.4 points per game. Paired with Oklahoma’s No. 5 ranked scoring offense (averaging 44.3 points per game) it’s one of the best single strength vs. strength matchups during championship weekend. In Week 12, the Bears held the Sooners to 17 points in three quarters before getting blasted in the fourth quarter for 17 additional points that cost them the game and perfection. This rematch is a golden opportunity for Baylor to right its regular season wrongs. If things get close, keep an eye on Oklahoma freshman kicker Gabe Brkic (#47), he’s a perfect 14-of-14 on field goal attempts this season.

Baylor: junior DT James Lynch (#93) (tied for the ninth most sacks in the FBS), junior CB Grayland Arnold (#1) (No. 3 in the FBS in interceptions)

Miami Ohio: senior DB Travion Banks (#6) (tied for the fifth most interceptions in the FBS)

Central Michigan: senior RB Jonathan Ward (#5) (No. 18 in the FBS in rushing yards per game)

Louisiana has officially won the Sun Belt just once, in 2005 when it shared the title with Arkansas State and Louisiana-Monroe. It also captured the crown in 2013, an honor that was vacated due to NCAA violations.

A rematch of last season’s Sun Belt title game, Appalachian State has won all seven times the two schools have met, including a 17-7 decision this season in Lafayette.

These two have both enjoyed a lot of success running the ball this season – Louisiana is ranked No. 6 nationally in rushing yards per game while Appalachian State is No. 18. They’ve also managed to limit opponents’ scoring – the Ragin’ Cajuns are No. 11 in scoring defense while the Mountaineers are No. 18. What sets them apart is success stopping the run – App State is a respectable No. 34 while UL is No. 80. The Cajuns have only rushed for fewer than 225 yards twice this season – 163 to Mississippi State and 123 to App State – also the only losses in 2019.

Appalachian State: junior running back Darrynton Evans (#3) (No. 20 in the FBS in rushing yards per game), sophomore DB Shaun Jolly (#3) (tied for No. 4 in the FBS in interceptions)

Florida Atlantic has earned two league titles since joining the FBS ranks in 2004 – sharing a piece of the Sun Belt championship in 2007 and then winning the C-USA crown in 2017.

These two have only met six times previously and haven’t played since 2014. FAU leads 4-2 but UAB won the last meeting 31-28.

UAB’s defense is elite – ranked No. 15 in scoring, No. 5 vs. the run and No. 6 against the pass. It sets up for a compelling matchup against Florida Atlantic’s No. 27 ranked scoring offense. The Owls have been more successful throwing the ball (No. 31 nationally) than rushing (No. 69). The only two teams who’ve managed to score more than 21 points on the Blazers this season are Tennessee (30) and Southern Miss (37).

UAB: sophomore OLB Jordan Smith (#22) (tied for the tenth most sacks in the FBS)

Cincinnati has won 14 league titles – two in the Buckeye Athletic Association, four in the MAC, two in the Missouri Valley, one in C-USA, four in the Big East and one in the American Athletic (shared, 2014).

These two played as recently as last weekend, Memphis winning 34-24 at home. The Tigers also lead the all-time series 22-13 and have won four-straight. This is the first-ever postseason meeting.

Memphis has one of the most productive and balanced offenses in the nation – ranked No. 8 in scoring, No. 34 in rushing and No. 23 in passing. While Cincinnati is ranked No. 26 in the FBS in scoring D and No. 46 vs. the run its biggest statistical weakness on that side of the ball is against the pass where they’re No. 76. On the flip side, the Tigers’ most blaring defensive deficiency is against the run, where they’re No. 77. Look for that unit to be tested by the Bearcats’ ground game, ranked No. 35 in the nation.

Georgia has also won the SEC 15 times and has represented the East in the conference championship game each of the last three seasons. Its most recent win came in 2017, a 28-7 victory over Auburn.

LSU: senior QB Joe Burrow (#9) (No. 2 in the FBS in both passing yards per game and passer rating), sophomore WR Ja’Marr Chase (#1) (No. 1 in the FBS in receiving yard per game)

Georgia: junior RB D’Andre Swift (#7) (No. 27 in the FBS in rushing yards per game) Swift suffered a shoulder injury last week and is “hopeful” for this week’s title game.

Hawaii has never won a Mountain West championship. Its most recent conference crown came in 2010 when it won the WAC.

Boise State has won the Mountain West three times, most recently in 2017.

Hawaii and Boise State have met 16 times previously, the Broncos hold a 13-3 advantage and have won the last seven-straight. The Warriors last win came in 2007, they are 0-6 all-time at Boise State.

There are two key matchups in this one. First up, it’s Hawaii’s passing attack – ranked No. 6 in the FBS – doing its thing vs. a Boise State secondary ranked No. 82. Where the Warriors are averaging 332.5 air yards per game the Broncos are allowing 233.8. Next up, tune in to see Boise State’s No. 13 ranked scoring offense ring up the scoreboard vs. Hawaii’s No. 98 ranked scoring defense. If nothing else, this one might be the most entertaining dish on the championship buffet.

Virginia has only won the ACC twice – first in 1989 and most recently in 1995. This is the Cavaliers’ first-ever appearance in the ACC championship game.

Clemson leads the all-time series 38-8-1 and has won three-straight. Virginia’s most recent win came in 2004. This is the first-ever postseason meeting between the two.

At least on paper, Clemson is one of the most complete teams in the nation – ranked No. 4 in scoring offense and No. 1 in scoring defense. The Tigers’ biggest major category “weakness” is a pass offense ranked No. 25. It makes Virginia – a team with no overwhelming facet on its resume – look like the most outmatched team this weekend. The common thread in each of the Cavaliers’ three losses this season is rushing yards, losing on three of the only four occasions when they rushed for fewer than 100 yards. While achieving this goal looks like no problemo for Clemson’s No. 11 ranked rush D, crazier things have happened.

Clemson: junior RB Travis Etienne (#9) (No. 10 in the FBS in rushing yards per game)

Virginia: senior QB Bryce Perkins (#3) (No. 3 in the ACC in passing yards per game)

A rematch of the 2017 and 2014 Big Ten championship games (both wins for Ohio State), these two have met 83 times previously. The Buckeyes hold a dominating 60-18-5 advantage in the all-time series and have won seven-straight, including beating the Badgers 38-7 this season in Columbus.

Like Clemson, Ohio State looks almost perfect on paper – ranked No. 1 in scoring offense and No. 4 in scoring defense. Its biggest “deficiency” is a passing offense ranked No. 45 in the nation. Wisconsin has one of the best defenses in the FBS, ranked No. 9 in scoring, No. 7 vs. the run and No. 9 vs. the pass. While this looks like a dream matchup – recent history (as recent as Oct. 26 of this year) tells us that the Buckeyes can hang up 264 rushing yards and three rushing TDs on a Badger D that, on average, has held opponents to 96.58 ground yards this season. If Wisconsin can manage to reverse course and put a lid on the potent OSU rushing attack, the Badgers will have a chance.

Wisconsin: junior RB Jonathan Taylor (#23) (No. 2 in the FBS in rushing yards per game), senior linebackers Chris Orr (#54) and Zack Baun (#56) (both tied for the seventh most sacks in the FBS, Baun is also No. 8 in tackles for a loss)

Just for the record, some people, including me, consider the Big 8 and the Big 12 to be the same conference under different charters. That would substantially increase the amount of Big 12 titles OU has won.