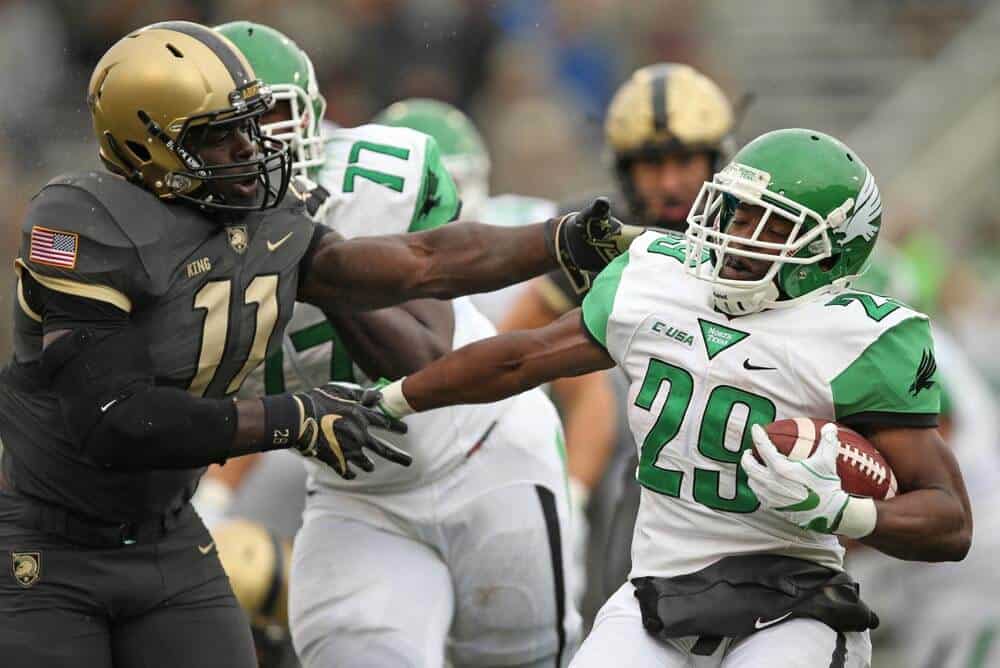 All of the games will be aired on ESPN with the exception of the Foster Farms on Wednesday which will be carried by FOX. It’s one of only four games not covered by the ESPN family of networks and the only bowl game on a FOX channel.

It’s an eight-game stretch over just two days. If you’re wondering which games to tune it to, check out the Russell Athletic (16 West Virginia vs. Miami Fla.) on Wednesday at 5:30PM EST and the Texas (Texas A&M vs. Kansas State) later that same night at 9:00PM EST. According to Vegas, which has assigned a three-point spread to each, these contests should be the most competitive.

Army and North Texas are the only bowl combo that also played during the regular season, a game the Mean Green won 35-18 at West Point. It was also UNT’s only win in the history of the series, dating back to 1996. The Cotton Bowl is only 45 miles from the North Texas campus. The game also marks the end of Army’s five season bowl drought.

(24) Temple and Wake Forest haven’t played each other in 86 years, last meeting in 1930 in Philadelphia. The Owls won that game 36-0, meaning the Demon Deacons have never scored a point on Temple. Wake Forest hasn’t won a bowl game since downing Navy in the 2008 EagleBank Bowl (the previous name of the Military Bowl). It hasn’t beaten a ranked foe since upsetting (23) Florida State in 2011, dropping 17 such games since. Temple’s last bowl win was in 2011, beating Wyoming in the New Mexico.

Minnesota almost didn’t play in this year’s Holiday Bowl, calling off a player’s boycott on Dec. 17 that could have propelled 5-7 Northern Illinois into the game as a replacement. The Golden Gophers and Cougars haven’t met since 1988, the last of a series of regular season games dating back to 1965 all played in Minneapolis. This is Washington State’s third Holiday Bowl and Minnesota’s first.

Most appearances: Kansas State and Minnesota (3 each)

The first ever meeting between the two schools. Boise State is 4-2 all-time vs. the current Big 12 membership; 1-0 vs. Oklahoma and Iowa State and 2-2 vs. TCU. Baylor is 16-4 vs. the current Mountain West, the most recent loss in 2002 at New Mexico.

The Broncos have never played in what’s now called the Cactus Bowl. The Bears played in the third-ever Cactus (then the Copper) in 1991 and were blanked by Indiana 24-0.

Most appearances: Syracuse and Rutgers (2 each)

Pitt and Northwestern haven’t met in 43 years, last playing a home-and-home series in 1972-73. The ’73 game was during Johnny Majors first season as the head coach at Pitt, taking a program that had won only one game the year before to a 6-5-1 record. Just three seasons later, in 1976, Majors would lead the Panthers to a 12-0 finish and a national championship.

Pitt has dropped two straight bowl games, last beating Bowling Green 30-27 in the 2013 Little Caesars. It hasn’t beaten a Power team in a bowl game since the 2010 season when it knocked off Kentucky in the Compass. Northwestern hasn’t won a postseason game since beating Mississippi State in the 2012 Gator.

Most appearances: NC State and Miami Fla. (5 each)

(16) West Virginia and Pitt shared membership in the Big East from 1991-2003, this is the first-ever postseason meeting. The Hurricanes have won six straight over the Mountaineers, but have also dropped their last six bowl games. The most recent win came in the 2006 MPC Computers (now the Potato Bowl), a 21-20 triumph over Nevada. They haven’t scored a win over a Power team in a bowl game since the 2004 Peach, a 27-10 victory over (20) Florida.

Most appearances: Boston College and UCLA (3 each)

Indiana and (19) Utah haven’t met since a home-and-home series in 2001-02, both wins for the Utes. The Hoosiers only-ever win came in 1975 in Bloomington. Utah has won three straight bowl appearances, last falling in the 2010 Las Vegas to (10) Boise State. Indiana is on the other end of the spectrum, dropping three straight bowl games, last winning 25 years ago over Baylor in the 1991 Copper. The Hoosiers’ most recent win over a ranked team came earlier this season when they beat (17) Michigan State 24-21 in overtime.

These two were both members of the Big 12 from 1996-2011, splitting their in-conference meetings 5-5. Though this is their first bowl meeting, it’s not the first postseason game as the two played in a memorable Big 12 Championship contest in 1998 in St. Louis. The Aggies won 36-33.

Texas A&M last won a bowl game in 2014 when they knocked off West Virginia in the Liberty. For Kansas State it was the 2013 Buffalo Wild Wings, a 31-14 win over Michigan. Kevin Sumlin is 3-1 in bowl action as the Aggie head coach vs. Bill Snyder’s 7-10 mark for K-State.

Thank you Amy, I was looking forward to this.
I know a lot of people complain about the attendance in bowls but the Texas, Cactus, Military & Holiday killed it last year.

I watch every bowl game on youtube whenever they become available as I cannot watch them live due to the fact that I live overseas (well, I could get up at 3am like I do for the regular season, but bowl games are a little different………unfortunately now it seems the playoff games only matter.)

And, as a former player, at the end of the season, especially your senior year when you know you are not going pro, it would of course be great with a stadium packed but that takes a backseat to playing one last time with the guys who will your buddies for life. So when we, the Iowa State Cyclones lost to Alabama in the 2001 Independence Bowl to Bama we were thrilled to be playing in a packed house for the last game of our lives…….

That would have been a killer game. Bowl organizers always flip-flop the bowl order to get the match up they need. That was a big whiff on their part.

why should Miami get stuck with the Pinstripe Bowl?