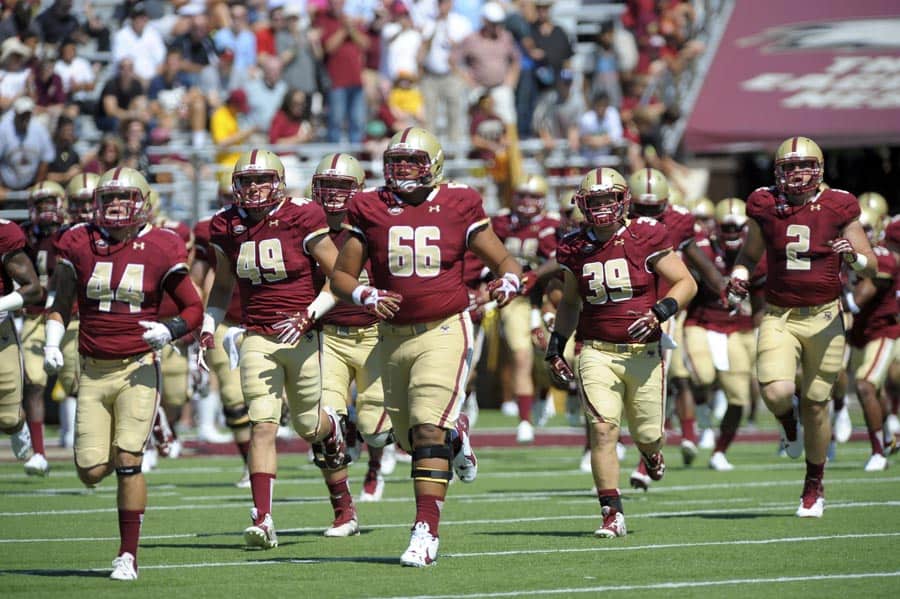 The Boston College Eagles and the Purdue Boilermakers have scheduled a home-and-home football series for 2018 and 2020, both schools announced Tuesday.

In the first game of the series, Boston College will travel to face Purdue at Ross-Ade Stadium in West Lafayette on Sept. 22, 2018. The Eagles will then host the Boilermakers at Alumni Stadium in Chestnut Hill on Sept. 26, 2020.

The 2018 game will be the first ever meeting between Boston College and Purdue on the gridiron.

Boston College now has three non-conference games scheduled for both the 2018 and 2020 seasons. BC is also set to host UMass and Holy Cross in 2018. In 2020, the Eagles again host Holy Cross in addition to Ohio.

The Boilermakers now have three non-conference games on the docket for 2018 and two for 2020. In 2018, Purdue also hosts Eastern Michigan and Missouri, while in 2020 they welcome Notre Dame to West Lafayette.

Purdue also confirmed a neutral-site matchup today that was first reported by ESPN back in May 2015. The Boilermakers will take on the Louisville Cardinals at Lucas Oil Stadium in Indianapolis on Sept. 2, 2017.

The Purdue-Louisville matchup is one of eight neutral-site games scheduled for the opening weekend of the 2017 season.

Once again, someone other than the SEC West plays a home and home.

Two commendable exceptions are Arkansas, who has an upcoming home and home with Michigan, and Texas A&M.

But your point remains…not sure why the Mississippi or Alabama schools or LSU can’t find (or fund) a willing participant, even if the school’s subpar (like Indiana, Illinois or Purdue).

Also…nice job by BC and Purdue to make this home and home series happen. Purdue certainly isn’t trying to take it easy.

According to this site Ole Miss has 4 H/H scheduled and one 2 for 1 (which might actually be a 2 for 2 with Tulane), Mississippi State has 5 H/H scheduled and one 2 for 1 (yes this includes series with non P5, but plenty of P5 as well). As far as not scheduling any non-conference true road games, Alabama is really the only culprit of this in the SEC.

Stupid remark. Auburn just concluded a home-and-home with Kansas State the season before, and has one starting this year with Clemson. And has a home-and-home ahead with California. So, this bullcrap about the SEC West needs to stop.

Would love to see another home and home between BYU and Boston College. Do it.

Didn’t LSU play @Syracuse this past season? They also seem to have future home and home series with Texas, UCLA, Arizona State and Oklahoma scheduled. Auburn just played @Kansas State in 2014 (to complete a home and home) and play Clemson and California in home and homes in upcoming seasons. Ole Miss lost @Memphis this past season and recently played Texas home and home. Really alabama is the only one that plays almost exclusively neutral site games.

Huey and Tim go look at the schedules from time to time. Auburn. LSU and Miss. State have several home & home games scheduled

I think you’re missing the finer point though, which is these teams play at least 10 Power 5 conference teams (8 or 9 conference and 1 or 2 Power 5 nonconference games).

The SEC West doesn’t do that, and most of them don’t travel outside the south.

But yes, they non require all SEC teams to play at least 1 power 5 team. That means 9 total power 5 games. That is quite sad for the best conference in football.

Huey,
What does it matter? Once again another SEC hater comes on & (sounds like all the rest) bashing the SEC with 9 game conference & 2 power 5 OOC. The best thing about Bama winning the championship is nobody can come on & say (the SEC was finally EXPOSED), that is what people were saying the last two years when the SEC did not win a championship but of course instead of congratulating the SEC you have to come on & say (quite sad for the best conference in football). Whether these teams play home/n/home or don’t travel that far is besides the point, most teams don’t have to travel outside the south cause some of the best recruiting is down south. Hell, Michigan has 10 Florida players on their roster, You making a comment like (Once again, someone other than the SEC West plays a home and home) is ignorant & there are going to be people on here to call you out on it, you need to worry about your own team & own conference.

Huey, you’re a special kind of geographically challenged. Last I checked for Auburn, Manhattan, Kansas, and Berkeley, California aren’t in the south. They’re both FAR from the south. What the hell do you propose Auburn do? Play home and home with Manchester United or Barca?

One thing remains constant, Florida still will not play a home and home(OOC) with any team outside the state of Florida.