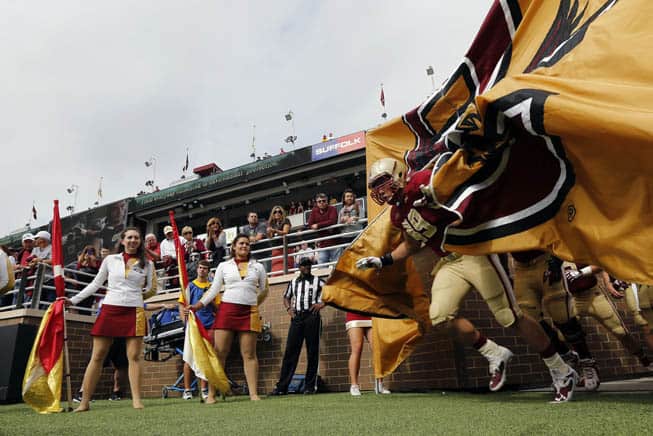 The Boston College Eagles and the Holy Cross Crusaders have scheduled a two-game football series for 2018 and 2020, both schools announced today.

Boston College will host both games of the series at Alumni Stadium in Chestnut Hill, Massachusetts. The first game will be played on Sept. 8, 2018, with the second and final game on Sept. 5, 2020.

“This will be a renewal of one of the oldest and greatest traditions of college football in New England,” Boston College Director of Athletics Brad Bates said. “For many years, this was `the game’ for alumni and fans of both schools, and I am delighted that we are able to renew – for at least two years – this spirited and long-standing rivalry.”

Boston College and Holy Cross have played a total of 82 games and the Eagles lead the series 48-31-3. However, the two haven’t met since Nov. 22, 1986. When BC and Holy Cross meet again on the gridiron, it will have been nearly 32 years since that last meeting.

Boston College only has one other non-conference game scheduled in 2018, a season-opener on Sept. 1 vs. UMass. Holy Cross is BC’s first announced opponent for the 2020 season.

“I’m very happy that in one of my final acts as director of athletics, we were able to complete this agreement with Boston College,” said Holy Cross athletic director Richard M. Regan, Jr. “This is something that Brad Bates and I have been discussing for a few months and it’s great that we could come to agreement on dates that work for both of us. I think for the alumni of both schools, it will be great to see these historical rivals play again.”

Holy Cross, which is located around 38 miles from Boston College, is a member of the Patriot League in the Football Championship Subdivision (FCS). The Crusaders have not played an FBS opponent since beating Army 30-21 back in 2002.

You have to be 40+ years old to remember this rivalry. The sentiment is no longer there for FBS vs FCS.

BC vs Holy Cross in modern memory best remembered for the Flutie Brothers games in the early 80s. This may be one of the only fbs vs fcs matches that makes sense from a historical view.

BC and holy cross that is old school…lol

86 game thanksgiving weekend. Likely last major conference school to play at a 1AA school not counting navy and army . BC 56 28