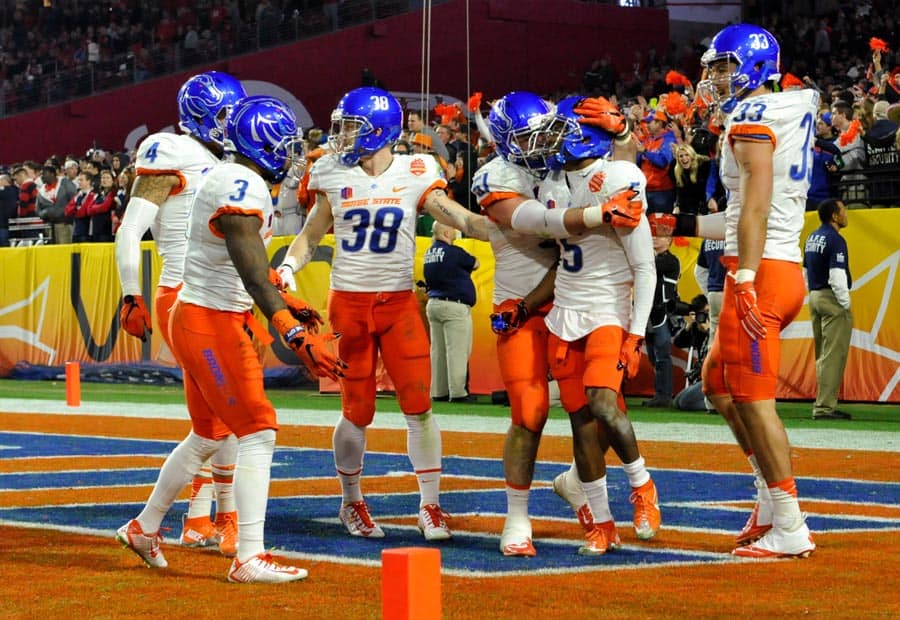 Did you know that three of the last five Super Bowl upsets were preceded by an upset in a major college bowl game played on the same field?

That means that all three of the last three Super Bowls that shared a common field with what was once referred to as a “BCS” bowl game (Fiesta, Orange, Rose and Sugar) resulted in the underdog winning both games, just days apart from each other.

Whether it’s a freaky coincidence or a magical process where one upset prepares the playing field for another, the results are crystal clear.

Take a look at the last five Super Bowl upsets:

This gives brand-new meaning to 3-point underdog No. 20 Boise State’s 38-30 upset win over No. 10 Arizona in this year’s Fiesta Bowl, played on Dec. 31, 2014 at University of Phoenix Stadium in Glendale, Ariz.

It’s the same venue as this year’s Super Bowl, on Feb. 1, where the Seattle Seahawks and New England Patriots will clash for all of the NFL marbles.

Given the ever-shifting line for this Sunday’s Super Bowl—Odds Shark currently has New England as a one-point favorite—we may not know until game time who the actual underdog is.

Either way, the team that is favored, even slightly, may be in peril of becoming the fourth recent Super Bowl favorite to share an upset loss with a college football team. In this case that team would be Arizona.

New England beat the Rams. And the Patriots were the underdog.

Boise beating Arizona wasn’t an upset. Arizona and the PAC12 are overrated. Arizona scored the weakest BCS opponent of any BCS bowl and still lost. PAC12 plays no defense. It’ll be a while for a national title in the PAC12. Haha
No one cares about this Super Bowl other than Patriots and Seahawks fans. And of course the people who only watch the Super Bowl, the only game they watch all year. Stick with the college sports Amy.

Perhaps your assertions are true, perhaps they are not. What this article is based on is who was favored on betting lines and the outcomes of the games, not subjective impressions of the teams involved.

I just wanted to make a point. I ain’t wasting my time commenting on chance. Stupid was of time and a waste of an article if u ask me. What’s even more funny when you think about it. These are bowl games and bowl games should be played between two equally matched teams, so why is there an underdog at all. Oh yeah to help directly influence what “they” want to happen. In this case it all backfired and the PAC12 got beat. Haha

Please, you should stop while you’re ahead. If the Pac 12 was overrated, what does that make the SEC, whose top 3 schools couldn’t stop a nosebleed and those were supposed to be the more favorable match ups at that.

Don’t go getting ur panties in wad John cause someone else has a different opinion than you. If you’re tired of my comments don’t respond. You go and compare the two conferences bowl matchups. TCU and GT were as hot a team as there was at the end of the year. Other than OSU who won it all. So you are gonna try and say the next top two teams from each confernce had equally tough bowl games. 3 loss Ole Miss played the most wanting to prove themselves team there was in TCU. Miss St played an underrated GT team. It wasn’t until GT beat Miss St that people are now giving GT any credit. Arizona lost to Boise and shit Asu somehow scored Duke and without a kick return in the final mins would have lost. The terrible ACC Sent its 5th/6th best to play PAC12s 2nd/3rd best. Not to mention, where were those bowls played? Oh yeah Arozona and Texas. So go on believing a record is everything. If you don’t think they are trying to set the stage for who they want at the top. Why haven’t the PAC12 and SEC played against each other in a bowl in eight years or more?

You’re right, everyone is entitled to an opinion, but if you don’t like the responses, then you should boost an opinion, especially one with extremely rose tinted glasses. Georgia Tech wasn’t underrated. Most thought they were good, doesn’t hide the fact they were supposed to lose to Miss. St. by more than a TD. And funny you point out the ASU/Duke game and a kick return, ignoring the fact that Duke’s own kick return was why it was a game to begin with. As to why the SEC and Pac 12 don’t play in bowl games, you’d have to ask them. Best guess is that one conference isn’t willing to travel past the state of Texas, while the other really doesn’t want to play west of Louisiana.

Good point, I wasn’t sure if u were gonna catch that one. Not many other people would have. Crowder is legit and Duke will miss him. Calling it now Artavis Scott from Clemson will break his record. I sure hope the teams nor conferences have that much power to control who they will play or not play in a bowl. I can understand the regular season to a degree. But hey, it wouldn’t shock me if that were the case. I use to believe this was a much more pure game than it seems to be. I use to believe people actually wanted to watch great football between great teams. All people want is a “W” no matter who it’s against or how they get it. But why wouldn’t they, stats are everything, although to the right eye are meaningless. But do like chatting, arguing, debating or whatever you want to call it with you. You seem to know ur shit. Being an ACC fan they don’t seem to get the credit I feel they deserve, especially with the credit they give other conferences for doing nothing different from ACC.