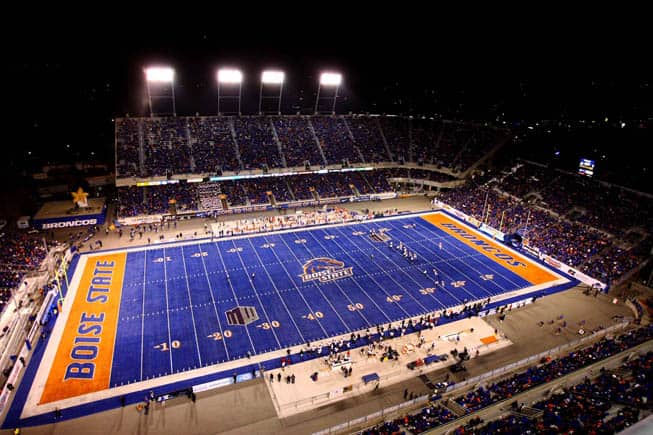 Oklahoma State will play on the blue turf in 2021. (Brian Losness-USA TODAY Sports)

The Boise State Broncos and the Oklahoma State Cowboys have scheduled a home-and-home football series for 2018 and 2021, both schools have announced.

Boise State will travel to face Oklahoma State at Boone Pickens Stadium in Stillwater on Sept. 15, 2018. The Broncos will then host the Cowboys at Bronco Stadium in Boise on Sept. 18, 2021.

The 2018 contest will be the first ever meeting between the two schools, unless they happen to cross paths in one of the next five post-seasons.

“We’re excited about the opportunity to bring Oklahoma State to Bronco Stadium,” Boise State Director of Athletics Mark Coyle said. “Boise State has proven it will play high-level competition, but our goal is to continue to schedule home-and-home series, so Bronco Nation has the opportunity to see these games in Boise.”

“It’s a good non-conference matchup for both of us,” Oklahoma State coach Mike Gundy said. “It gives us each a quality opponent out of conference play, which is ultimately going to factor in when we get to the four-team playoff.”

Boise State has now completed their 2018 non-conference schedule and needs two more games in 2021 (unless they travel to Hawaii in those years and want a 5th game). Their 2018 slate also includes BYU and UConn at home and Troy on the road. The 2021 schedule features a trip to BYU.

The addition of Boise State gives the Oklahoma State Cowboys three non-conference games in 2018 and their first in 2021. OSU is also slated to host Central Michigan and South Alabama in 2018. The South Alabama game was initially set for Sept. 15, and a new date is to be determined.

Florida State, BYU, Oklahoma State and UVA for future series. Gotta like what is going on out here, go Broncos!

This is a great pick. Too be we have to wait until 2020 for the really good teams to start showing up. Now if we could only cancel the Lafayette and Troy series there would something relatively soon to look forward to that mattered. No offense to Washington, UConn or Virginia, but they are not consistent winners like the others. How about getting some southern division pac12 teams in there, even on a 1 home 2 away basis like UCLA or Stanford or even USC (long shot).

Stanford will be a has-been soon enough. Don’t let a 2 year blip make you think they are a football school. As to your denigration of the other teams, chillax. There is not a team out there that can have a schedule full of Top 10 teams. Lafayette and Troy are very respectable programs. Sit back and enjoy life and stop being a critic of every little detail.

Troy and Lafayette are respectable in that have served as doormats for the past 15 years for big schools. They are combined 3 wins a 62 losses against BCS teams since 2000. Boise has no games scheduled against consistently top level teams other than Florida State and Michigan State. All of the the other BCS teams scheduled are mid level BCS programs with an occasional visit to the top 25. Washington was last there in 2000, BYU every once in awhile year, Washington State in 2001, Virginia not in the last 15 years, same for Uconn, and Troy and Lafayette, never. While an improvement over UT Martin ( let us hope that we never see a game like that scheduled again) and Southern Miss, and all of the MAC teams that were paraded through town, this is hardly a murder’s row, and with half of the MWC games coming up are considered cannon fodder, it is going to be several years before teams that genrate real excitement show up in Boise.

Is there a more architectually speaking stadium more unattractive than Bronco stadium?
With its incomplete 2nd decks that just terminate in mid air air, the cheap bleachers that were tie into nothing and the painted over running track, it resembles a federal housing projected erected by the lowest bidder? Is there a Phil Knight out there than can help us?

Former Vandal nailed it. The SmurfTurf is supposed to be a distraction. In theory; if you focus just on that oddity, you won’t notice the more serious flaws.

Dennis Rodman uses the same strategy. The outrageous hair, tatts, and wardrobe is all there to keep you from noticing how humongous his ears are.

The Kibbie Dome is not a stadium. It is large World War Two aircraft storage facility waiting to be torn down.

Isn’t it a wonder that in a relatively small state like Idaho, with the Kibbie Dome and Bronco stadium you have 2 of the smallest and most cheaply built venues in Division 1 football! The Kibbie dome resembles the quality of play you see on the field from the Vandals. The partially completed Bronco stadium with the painted track, ill fitting endzone high school bleachers resembles the dumpy house that the smartest kid in your class lives in. He know that if studies hard, gets good grades and graduates from college , then someday with a good job he can buy a house in a decent neighborhood.

True, true, true. I agree with most of your comments– but don’t get all too crazy in your zest to be more than the best team in Idaho. True– stadium is a mess. You don’t really notice that the sideline seats are 40 years from the field when you’re watching those TV game with the high angle that only show the blue turf. True– sooner than later with some high quality opponents would be better– but conference realignment has dictated that– and teams couldn’t schedule accordingly until a little stability set in (Boise would be criminal #1 in this atrocity with their Big East flip/flop.) And true that Troy and La Laf haven’t been top 25 teams on a regular basis– but beware– major programs (and not just those at the bottom of their leagues) have done the home and home kiss-up with the likes of Troy and went to Alabama and came home with a loss.

good comments. There is a great report on Bleacher report regarding the attendance challenge facing Boise for 2013 with the unattractive home schedule and higher ticket prices. Hopefully fans will increase their support at this critical time if Boise is to ever have the chance to move up to better conference. Boise needs to keep winning and hope that somebody with big dollars will write a large check to help increase stadium capacity and improve all of the stadiums drawbacks.

nampa Does Boise have any notably rich alums like OU does with Phil knight and OkState with Boone Pickens ready to crack the checkbook open?

Who runs Micron? They still make memory chips, don’t they? Or has that all gone to China? Someone around Boise has to have some funny money burning a hole in their pocket. Kidding aside, this matchup is great news for BSU. They need more like this, it is just a pity the first game is over 5 years away.

I went to an Idaho football game when John Friez was their quarterback. They won, I can’t remember who they played, it wasn’t Boise State. It was an okay facility back then, I got invited because I was a college track athlete and I was a friend of a friend of an Idaho track coach.

My post above was a reply to former vandal’s post about stadiums, in regard to the Kibbie Dome. The site isn’t posting my replies as replies like it used to. As for deep pockets, what about Simplot? Don’t the potato guys have some cash they could pony up for a sports facility?

When you reply, are you clicking the reply link on the right hand side of the message you are replying to?

The Bronco fans think they will sleep through the game against the Ragin’ Cajuns. Would you please ask your buddies at San Diego State if they slept through the New Orleans Bowl in 2011? I am telling anyone that will listen that in 2014, UL will roll in there and that will be a great game.
Troy is actually not as good as they used to be because South Alabama recently went FBS and they are taking recruits Troy used to get automatically.

It looks like along year for ULL getting blown apart by everyone decent so far. Good luck with UT Martin and possibly Dean Martin. Don’t spend too much money on a stadium expansion that you don’t and will need to raise tuition to pay for.

I did, but then I logged in and it put my reply here instad of posting it as a reply.

The Kibbie Dome was designed by a child molester.