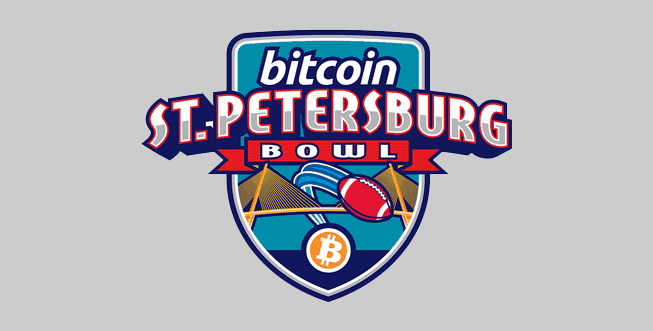 In a release this morning, ESPN Events announced that BitPay has signed on as the new title sponsor of the annual college football bowl game played in St. Petersburg, Florida.

The bowl will now be known as the Bitcoin St. Petersburg Bowl. Kickoff is set for 8pm ET on Friday, Dec. 26, 2014 and the game will be televised by ESPN. The bowl pits a team from the ACC against a team from the American Athletic Conference.

BitPay is a Payment Service Provider (PSP) specializing in eCommerce, B2B, and enterprise solutions for the Bitcoin digital currency. BitPay, founded by Anthony Gallippi and Stephen Pair in 2011, is headquartered in Atlanta, Georgia. According to Bloomberg, BitPay “processes over $1 million per day in bitcoin payments for over 30,000 merchants.”

“Our goal is to continue to move bitcoin into the mainstream and sponsoring the St. Petersburg Bowl offers us that opportunity,” said Tony Gallippi, Executive Chairman for BitPay. “College football fans and the bitcoin community represent a similar target demographic – tech-savvy men between the ages of 18 and 40.”

Can’t wait for the NCAA to implode and take all these “bowl” games with them. Getting rewarded with a bowl game for going 6-6 isn’t right. Only the top 16 teams should get a invite to a bowl.

GEG and Justin. if someone is breaking into your house and forcing you to watch games you don’t want to watch at gunpoint, then you need to call 911. i enjoy bowl week, and some of the lower tier games are quite watchable. If they aren’t your thing, there are some adorable movies on Lifetime for your viewing pleasure.

(if someone is breaking into your house and forcing you to watch games you don’t want to watch at gunpoint, then you need to call 911) REALLY?

Bill(the one nobody cares about)
I didn’t ask for your opinion. Go bother somebody else with your nonsense.

Really GEG…it’s called sarcasm. I am pointing out htat you don’t have to watch it.

I agree with Bill. There are some hardcore college football nuts like myself who love college football. Come December, things are starting to wrap up for a long, cold and quiet year. I will take it all in during bowl week. “To each their own.”