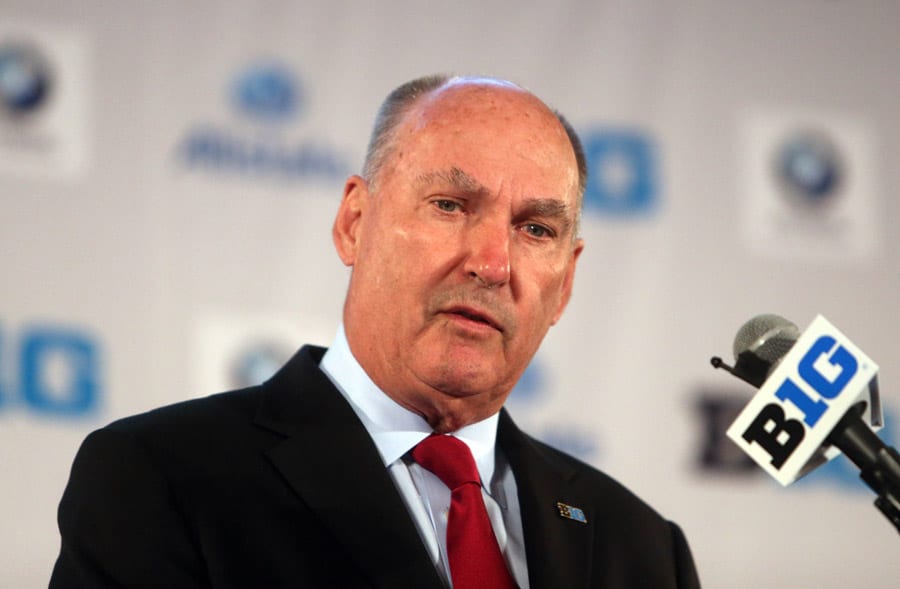 Today at the Big Ten Media Days, conference commissioner Jim Delany announced a “strength of schedule commitment” for its member teams beginning in 2016.

Each Big Ten school should schedule a non-conference game against an “autonomy five opponent” (commonly referred to as Power Five). That means a game against a team from the ACC, Big 12, Pac-12, or SEC.

In addition, Delany stated that games against BYU and Notre Dame will count towards the strength of schedule requirement.

Also, as first mentioned back in 2013, the Big Ten will discontinue the scheduling of FCS teams beginning in 2016. According to Delany, this component is considered an “athletic directors agreement” rather than a mandate.

Delany stopped short of saying his schools will be penalized for not following the Big Ten’s strength of schedule commitment.

So it remains to be seen whether every school will stop playing games against FCS members completely. Currently, eight Big Ten teams have games scheduled against an FCS team in 2016. From 2017 onward, there are only six such games scheduled.

The ACC and SEC, which play eight conference games, both previously announced strength of schedule mandates. Beginning in 2017, ACC schools must play one non-conference game against a Power Five team (or BYU or Notre Dame).

The SEC has a similar mandate that begins in 2016 and possibly includes Army, although no official statement has been made by the conference. Both conferences, however, will still schedule FCS teams for the foreseeable future.

The Big Ten, the SEC, and the ACC all agree that BYU is a Power Five opponent. Time for the PAC 12 and Big 12 to give BYU the same recognition – or, better yet, send BYU an invitation.

Because they can take an independent, call it a Power 5 school even though it isn’t, and collect the win whilst fulfilling the SOS requirement.

BYU would have been invited to the Pac 12 long ago if it was going to happen, and thankfully it’s not. It’s a school that’s always played consistently mediocre opponents and then insisted it’s a national contender without actually ever beating a really good team or beating even good teams on a weekly basis. Academically, BYU is also worlds away from the upper echelons of the Pac 12 (Stanford, Berkeley, UCLA, USC, and Washington). Maybe the Big 12 is that desperate, but I doubt it.

Agreed, they are not giving the FCS enough credit based on facevalue – there’s about 25 teams (if not more) in FCS that would be a way bigger challenge than Eastern Michigan or UMass.

That still doesn’t negate the fact that FBS teams in general are more competitive as a whole. Just because some FCS schools are better than some FBS schools doesn’t mean that this is not a good move.

Plus 10 games against P5 schools guaranteed (9 conf games + 1 P5 OOC) is a good requirement. 2 games against whoever you want FBS isn’t terrible. Some other teams schedule 3-4 cupcake games, with the B10 having 2 at the max, it definitely makes for some college football!!!

As much as I respect what Jim Delany has done. He’s becoming more of a dictator. It’s time for him to move on. Barry Alverez would be better at that job.

All Power 5 conferences need to be playing at least 10 games against other Power 5s and no FCS games. Standard scheduling will make it easier for the committee to rank teams. Oh and Notre Dame and BYU need to have conferences and the the Big 12 needs a title game (and at least 12 members).

BYU would love to be in a Power Five conference. Call up the Big 12 and the PAC 12, and ask them to send BYU an invitation to join ASAP.

The odd thing to me is if you look at B1G future schedules, 2016 has 8 FCS games scheduled in it. Plus there are several years that teams have 3 OOC games scheduled with no P5 requirement game scheduled as well as other FCS games a couple of years out. Is this really starting in 2016 or is it going to be “moving that direction” starting in 2016? Would they change their future schedules to comply? Or is it more of a guideline…

I think they really meant starting after 2016. There is not time to make all those changes by next year. 2017 schedule would take little change b/c only 2 schools don’t have P5’s and 3 have fCS games..

As someone who went to an FCS school, and lives in Big Ten country (Minnesota) this is sad to hear. I knew it was coming, had heard the talk, but it’s still disappointing. I don’t think these big conference ADs, coaches and commissioners understand how important these games are to FCS schools.

The checks they get from the games can go a long way, it’s good for recruiting and can be huge exposure for the school, if they can nab the win. Heck, when I was in college, the only reason we made the FCS playoffs my 1st year was because we upset an FBS team in week 1, then had an up and down year. Never officially said, but a win against a Big 12 school more than likely got us in, despite our 7-4 record. Not to mention how much it means to the players, especially when it’s against another local/regional team.

At the same time, as someone who has seen the local FBS team lose to FCS teams on multiple occasions, even recently, I get why they don’t want their teams scheduling these games. That being said, if it’s to increase the conference’s strength of schedule or whatever, why does it really matter? Using the Big 10 as an example, who really is going to have a true shot at a championship/play offs yearly? Ohio State, Michigan State and maybe Wisconsin? So why does it matter if Illinois, Indiana and Rutgers (as well as others) schedule a week 1 game against a local FCS team or a team from the Sun Belt, C-USA or AAC? Those teams are still going to likely be bottom feeders or non contenders, and likely lose to the top teams of the conference either way. So I can see both sides of the argument/debate.

It was a boon for your school, but the B1G has little to gain – I think they’re concerned with ticket sales, TV ratings, and change of perception to avoid those upsets.

With the B1G containing an array of cupcakes I am not convinced these changes make the overall schedules any tougher.

Which is tougher, Northern Iowa or Indiana? How about North Dakota State or Illinois?

Just like every conference in the history of sports. There are always weaker teams. Your post is clearly just you digging for anything you can find to criticize.

Noethwester, Purdue, Minnasota, Rutgers, Maryland. All usually between bad and mediocre with the occasional good season. There is a reason the entire Ohio State schedule is receiving so much criticism, in conference cupcakes.

And again, those weaker teams exist in every conference in every sport. Anybody with a brain can figure that out…

I find it convienient that you included a few teams that were average to above average last year and didn’t mention the good ones. Those teams exist in the B12, SEC, PAC, and ACC too!

Umm, Minnesota, Maryland, and Rutgers were all up last year. I failed to mention teams that were down that are usually up like Michigan, Penn State, and Iowa. When at least half your conference is usually down you have a weak overall conference. = in conference cupcakes

LOL @ your logic. You sure know how to make people laugh. Keep up the good work!

Invite all the FCS Schools that have a big enough fan base, and meet stadium minimum requirements to FBS, and regulate all the smaller FCS schools to D2.

Yes, find it funny that most B10 schools have games sched against FCS schools next year. What a joke!! Hey, for all of you FCS lovers, why should the FBS schools have to prop up your athletic programs? I bet you don’t worry about propping up a Div II school and schedule one of them. I am so tired of these FBS vs. FCS games. 90% of them are a joke. Chattanooga vs. Alabama, really?

Further, if universities are wondering why there is dwindling attendance in college football, this is certainly one of the reasons … games that are a huge mismatch.

Many FCS teams play at least one D2 team a year. It’s no different than an FBS/FCS game. They pay the D2 school to come and (usually) take a big loss. Pay outs are obviously lower, because the budgets for FCS schools are smaller, but it’s the same concept. It helps the D2 school financially. Way to research…

Of course the games are often going to be mismatches, but so is Alabama (using your example) or most FBS schools against Florida Atlantic, Georgia Southern, Troy, etc.

It’s all the same to the average or uneducated fan. It’s only a big deal to the people who follow college football heavily.

Also “Why should FBS programs have to prop up your program?” is a very irrational question. Of course they don’t, but it is greatly appreciated. It’s for the better of the sport. Essentially your post gives the vibe “If you don’t cheer for a major program, or go to a small school, or live/grew up in a smaller city with an FCS school, then F you”. As for your ” if an FBS school scheds an FCS school and they lose the game, then they are automatically ineligible to be ranked in any poll for the remainder of the season, they are ineligible for a conference championship and they are ineligible to play in a bowl game” idea, it’s not necessary. Teams who lose to FCS teams are usually not competing for top 25 spots, or conference titles anyways, because they’re not that good. Bowl games being the RARE exception… FCS games, like D2 games for FCS schools, could just not count towards any playoff chances. That game is thrown out of the picture regardless of the result. Granted in the FCS it’s 24 teams, not 4, but still..

This will only accelerate the expansion of FBS. Schools like NDSU, UNI, EKU, Coastal, JMU, Liberty, etc. have just been given the rationale for moving up.
.
The MAC could logically add UNI and NDSU, which fit much better than Temple or UMass ever did. And the Sun Belt wants at least 12 for a CCG. Expect there to be 144 FBS teams as FCS continues to shrink.

Not sure if we will see it but I’d love to see a Florida St Ohio St matchup in Nashville,TN

FBS plays FCS schools in football, because like any other sport, they are all Division I and play each other. Due to some of the FBS .vs. FCS games, the FBS has gain some teams from the FCS, and one was very successful last season, Georgia Southern of the Sun Belt. Now, I do think that the schedules need to be more standardized for all teams especially the Power 5 teams.

It’s not that hard to standardize the schedule.

The problem with this is that it makes it harder for non P5 teams to prove themselves. Most of them would love to schedule more big games, but they don’t get the opportunity. Unfortunately, that means that great teams can go undefeated in a non P5 conference, even playing 1 or 2 P5 teams and still miss out on getting the ranking they deserve (or even chance in the playoffs) because their SOS is too weak. And they have almost no control over it.