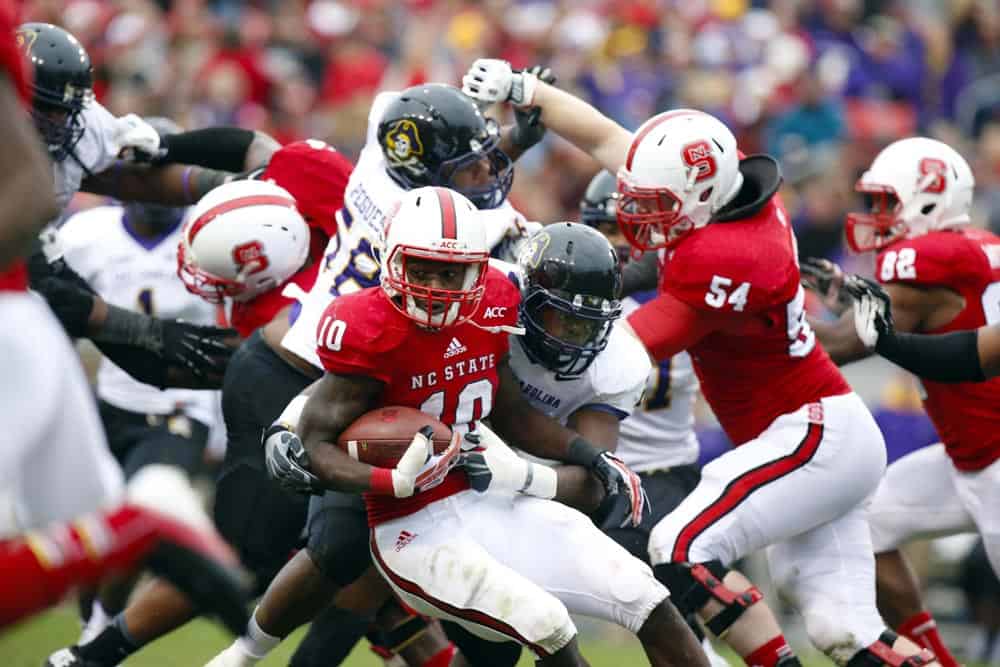 It’s true whether it is people growing up in the same house or football teams hailing from the same state.

The bonds of a shared address are woven with jealousy, fear, redemption and yes, somewhere in there, love. Throw in tens of thousands of passionate fans and it gets even better.

Take a look at the 16 big brother-little brother matchups in 2016. Each features a Power 5 team and a non-Power FBS team from the same state. They’re ranked from the most-likely to the least-likely, historically speaking, that the smaller school can pull-off an upset.

Indiana is one of only three big brothers listed who have a losing record vs. its 2016 little-brother in their last five meetings.

Despite Vandy’s overwhelming all-time advantage over Middle Tennessee, it dropped three straight to the Blue Raiders from 2001-05.

The Commodores are 1-3 vs. MTSU when both schools were classified in the FBS, the only win coming last season, a 17-13 victory in Murfreesboro.

Cal is the first big brother on our list to have a winning record vs. its smaller counterpart in their last five meetings.

The Golden Bears have won two straight vs. the Aztecs, but have never beaten them in San Diego where they’re 0-3 all-time. The two haven’t clashed there since 1995.

Colorado-Colorado State is the only annual fixture on our list, the two schools squaring off 82 total times and consecutively since 1995.

The Buffs have managed to win three of the last five and six of the last 10, but haven’t won two straight over the Rams since 2010-11.

USF’s only win vs. Florida State came in 2009 when it traveled to Tallahassee and upset the No. 18 Seminoles 17-7. It was the first time the two schools had ever met on the gridiron.

FSU has won two straight since then by an average of 16.5 points.

No two teams have met more times on our list than TCU and SMU, clashing 94 times since 1915. Though 80% of these games were played before the Southwest Conference disbanded in 1996, the two schools have met 19 times since, keeping the cross-town rivalry current.

The Horned Frogs haven’t dropped a game to the Mustangs since 2011, one of only two losses in the last 10 meetings. The other came in 2005, also TCU’s most recent defeat at SMU.

The Aggies and Roadrunners are the only big brother-little brother in 2016 to have never met previously in football.

The matchup lands at No. 9 based on Texas A&M’s 82-27-3 (74.5%) all-time record vs. the current members of Conference USA. Each of the 27 total losses came to old-Southwest Conference foe Rice, who the Aggies haven’t fallen to since 1980. They’ve won 17 straight over the Owls since.

The first of Baylor’s two little-brother match-ups in 2016, the Bears have beaten SMU 12 straight times.

Baylor has won seven straight games over Rice, last losing in 1992 in Houston. The two schools have met four times since the Southwest Conference shut down in 1996, the Bears winning the last two (in 2015 and 2011) by an average of 39 points.

Penn State’s loss at Temple last season was the first since 1941, the Nittany Lions scoring a 38-0-1 run vs. the Owls since then.

The two schools have only played once, in 2014, since UMass moved back into the FBS ranks. Beginning in 1901, BC-UMass is also the oldest series on our list.

Georgia Tech is the first of four big brothers in 2016 who have never lost to their younger sibling. It lands here at No. 4 because the Yellow Jackets have only played Georgia Southern once.

Tech is also perfect vs. the Sun Belt, holding a 3-0 all-time record vs. its current membership.

Tied for the most likely win vs. a little brother, Texas has won four straight vs. UTEP in a series that stretches back to 1930. It’s most recent win was a 64-7 blow-out in 2009 in Austin.

Tied with the Longhorns at the top is Ohio State, which has never lost to Bowling Green and is 32-1-0 all-time vs. the current MAC. The only such loss came all the way back in 1894, when the Buckeyes fell to Akron.

Ohio State and Bowling Green’s short series didn’t kick off until 1992 and was last played in 2006.

This is a cute article, I would’ve kept out A&M vs UTSA since this is their 1st ever meeting.

If you watched the 2014 Georgia Southern @ Georgia Tech game or better yet, if you attended the game, then you would know the ACC referees took the game out of the players hands with a terrible reversal of an ON THE FIELD call (requires indisputable evidence…it’s still being disputed). Georgia Southern was the better team that day and still has the more dynamic roster. Thank you Paul Johnson and the Tech AD for not being scared (UGAg) and rescheduling the Eagles…GS won’t leave it in question this go around. It would be great for the state if GS and Tech continued to schedule a game (maybe a H&H once Paulson Stadium is expanded to 30k) every other year. Athletically, as of late, the two schools are closer to peers than big brother-little brother.

Georgia has played Georgia Southern six times since 1992, Georgia Tech only once. I don’t think Georgia is scared of GS.

Interesting that 5 of those 6 times were when Georgia Southern had 63 scholarships. The 6th game was a carry over from GS’s FCS days and Georgia elected to move the game from 2016 to 2015 probably because they didn’t want an additional year of FBS recruiting for GS. Georgia was gifted that win last year and every dawg fan knows it. For both parties, it is understood that Georgia no longer wants any part in scheduling GS and frankly that’s fine by me.

Don’t worry Kevin Kelly, that’s just GS non-sense talk. They told GSU that they’d never beat GS – but in the just the second meeting (last year) GSU gave them their worst defeat in the history of Paulson High School County Stadium, The glory days of GS are behind them. The newsflash to GS is that they are the #4 team in the state of Georgia and they think that they are #1.

Georgia Tech got up big in that game and then let up and allowed Georgia Southern back in, the Eagles were far from the better team that day.

Georgia Southern’s coach was on his way out and focused on a million dollar salary…way to go. How’d that bowl game work out for the mighty Panthers? Let’s compare some numbers for a minute…17-53 (129th in FBS) vs. 375-200-10 (14th in FBS)…0 D1 National Championships vs. 6 D1 National Championships (most all-time)…0 D1 Conference Titles vs. 11 D1 Conference Titles. WHEW! I can certainly understand why a Panther fan (those exist?) would cling like hell to that win against Georgia Southern! Run along now, let us men get back to it.

GS has never beat UGA – GS has never beat GT – GS is 50/50 against GSU.
So your excuse is that GS got pounded at home by GSU cause your coach was dreaming about a real job? Really? That’s all it took for the mighty Beagles to lose at home? A coach’s daydream? All that tripe that GS spews about GSU and you got pounded in just the second effing year by a five year old football team? Fact is that Richt got fired because he almost lost to GS so that should tell you about how little respect there is for the GS product. So maybe GS needs to realize that they may start to fall behind KSU or Mercer. You guys have such an incredible false sense of entitlement from all those Pee-Wee league trophies. Probably ought to go on back to FCS Pee-Wee league! How about that Capt GAyTAy?

The Real GSU has played UGA and GT once with equal scholarships. Do you understand that having 22 less scholarships is a disadvantage? Once the playing field was made even, the Real GSU lost by a combined 10 points in their first outings with 85 scholarships. Again, I appreciate GT rescheduling the Real GSU unlike UGAg (I bet you’re a UGAg fan before a GAy St fan). Do you understand that when a head coach does not prep their team for a game that the team is unprepared? Big concepts here. Do you have any facts or just opinions? Richt was on the hot seat at the start of that season and the season before that…try to keep up. The fact that you recognize KSU and Mercer says a lot about where you view GAy St. Pee-Wee trophies…you’re talking about Division 1 National Championships. Do you understand that prior to the College Football Playoff, the FCS Playoff was the highest form of a college football playoff in existence? Oh but computers picking two teams worked out every time. The Real GSU should go back to FCS? You mean the Real GSU with the 18-7 FBS record (.720)? How about GAy St with the 7-30 FBS record (.189). This is too easy man, c’mon. (A) Why would GAy St field a football team and (B) why would ANYONE be a fan???? LOL LOL LOL LOL LOL LOL LOL!!!

Southern has never beaten Georgia and never will.

The “REAL” GSU just beat the GaSo clown big talkers AGAIN! GAyTAy!!!
So GaSo now has a LOSING record against GSU along with
never beating UGA and GT! So just go STFU !!!!!!!!!!

what about the Brigham Young-Utah State game or the Notre Dame-Navy game?

Neither BYU nor USU are a Power 5. And Notre Dame and Navy aren’t in the same state.

Matt probably meant to say the BYU-Utah game. Utah is a P5, but BYU is not. The summary would read something like this:

Utah has dominated its little brother, BYU, over the last 13 meetings (10-3, 77%). And they will certainly do so again this fall.

how would BYU qualify as a “Big” brother?

Bill, Utah would be the big brother

Someone asked that on Twitter, FBSchedules replied “BYU generally considered P5 so not included.”

BYU fits the P5 requirement for scheduling for most if not all conferences. The SEC looks at BYU as a P5…last time I checked the SEC is the premier program in College Football.

good article ….but i would say Georgia Southern has a much better chance of beating Georgia Tech than many of the games you have ranked as more likely. I don’t think very many people would be surprised is Georgia Southern wins that game.

Utah had to be invited to a conference to be considered P5. BYU did it on their own.

BYU is considered by some to be a P5 “for scheduling purposes.” But we’re not actually a P5, since we don’t belong to a P5 conference. That’s why it’s so important for us to get into the Big XII…the fate and viability of our football program rests on it. If we don’t get in and become an actual P5, our future looks no better than that of New Mexico State.

By that thinking, Toledo would also be considered a Power 5 Power Team, since it can beat 1/2 or more of teams from Power 5 Conferences…

I think ECU is NC State’s big brother when it comes to football.

What about Penn State vs Pitt this year?

I don’t think many Ohio State fans see any MAC schools as “little brother.” The only school that would make sense to have that designation would be U of Cincinnati.

Toledo, Ohio and BGSU, Ohio are both vastly better than Cincinnati, Ohio !!! As is Ohio Bobcats

When they say little brother, I think they actually mean LITTLE BROTHER! Auburn is not a little brother to Bama, same conference, same league, Auburn has done their fair share of butt whooping on Bama in the past. If that was the case then the article would have Michigan vs Michigan St.