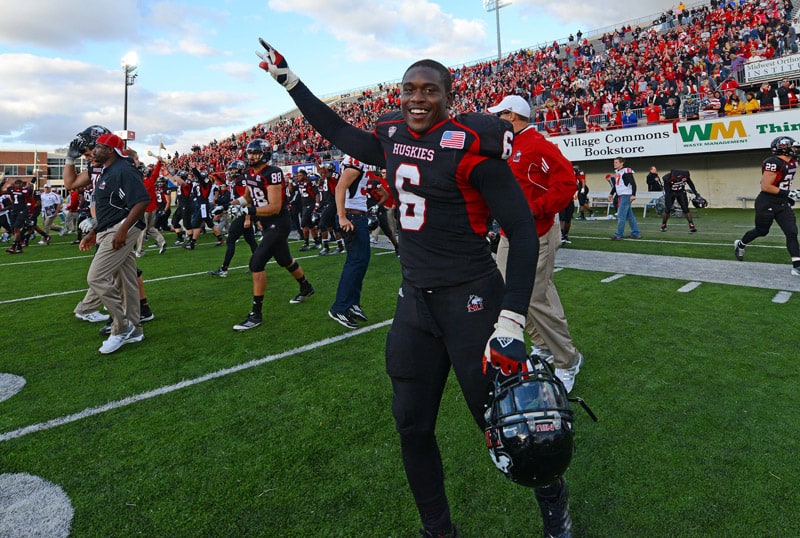 NIU is undefeated at home since 2011. (Mike DiNovo-USA TODAY Sports)

If someone asked you to name the ten college football teams with the best home records since 2011, which schools would be on your list?

Well, if you were thinking Oklahoma, Virginia Tech, Texas, Boise State, Wisconsin, Florida, TCU or Notre Dame, you’d be wrong. Though those teams all have excellent home records over the last decade, they aren’t even in the top 10 over the last three seasons.

Here’s a look at the FBS teams—ranked for your pleasure—that have a winning percentage of 90 or better at home since 2011 and the teams tasked with visiting them in 2014.

Be afraid, be very afraid.

Georgia Southern enters its inaugural season in the FBS ranks with one of the best home records in college football. The Eagles went 8-0 at home in 2011, lost 31-28 to Appalachian State in 2012 and then dropped a game 16-14 to Furman in 2013.

It will be intriguing to see how Georgia Southern’s record at Paulson Stadium holds up a couple of seasons into its membership in the Sun Belt conference.

The Crimson Tide have only lost six home games in the Nick Saban era and three of those came in 2007, his first season at the helm. Alabama’s most recent home loss was in 2012 when No. 15 Texas A&M edged the No. 1 Tide 29-24 in Tuscaloosa.

In fact, Hoke was 14-0 at home coming into last season only to lead the Wolverines to losses against Nebraska (17-13) and No. 3 Ohio State (42-41). That puts him a mere five-points short of a perfect 21-0 record at Michigan Stadium.

The Tigers haven’t lost a game to an unranked opponent in Memorial Stadium since 2008 when they fell 21-17 to Georgia Tech.

No ACC team has a better home record since 2011 than does Clemson.

The last time the Ducks lost more than one home game in a season was in 2007, when they fell to both unranked Oregon State and No. 6 Cal.

Urban Meyer is 15-0 at Ohio Stadium since coming to Columbus in 2012, a record that puts him on track with his predecessor Jim Tressel, who had a 64-7 mark at home in his 10 years at the helm.

The Buckeyes’ only two home losses in the last three years both came in 2011, when interim head coach Luke Fickell led the team its first losing season since 1988. The two defeats were to No. 21 Penn State (20-14) and unranked Michigan State (10-7).

No Big Ten program has a better record at home since 2011 than Ohio State.

The sole home loss for the Bears in the last three years came in 2012, when unranked TCU strode into town and slapped them with an ugly 49-21 loss.

Baylor’s home record will be tested at a new venue in 2014 as it moves from Floyd Casey Stadium (built in 1950) to glittering McLane Stadium, located on the banks of the Brazos River.

The first of three teams with a 20-1 record at home since 2011, South Carolina’s only home loss came three years ago when it got nipped by unranked Auburn 16-13.

The Gamecocks are a perfect 14-0 over their last two seasons at William-Brice, a run that included wins over No. 6 Clemson and No. 5 Georgia.

The last time LSU lost at home to an unranked opponent was in 2008 when Ole Miss came to Tiger Stadium and won 31-13.

The best team in the FBS at home over the last three seasons, the MAC’s Northern Illinois is 22-0 at Huskie Stadium since 2010.

The last time the Huskies lost at home was in 2009 when Idaho waltzed into DeKalb as 15-point underdogs and engineered a 34-31 upset.

Northern Illinois hasn’t played a ranked team at home since 2003, when it beat No. 15 Maryland 20-13 in the season opener.

I seem to remember that South Carolina fans use a technicality to say that they have the longest home winning streak. What is it again (not meant to cause an argument, just forgot what it is)?

NIU lost two “home” games that were played at Soldier Field in 2011 and 2012. So South Carolina claims those ended the streak for NIU even though the games weren’t on campus.

NIU’s games at Soldier Field should be considered neutral site

Those Soldier Field games were barely even neutral site games for NIU. The Big Ten “visitors” had more fans than NIU in both of those games.

That’s because NIU tries to schedule bigger opponents but they all decline unless they can get a 2-for-1 AND the road game CANNOT be on NIU’s campus. It’s a joke because no one wants to come play them there. So they resort to filling any slots they can with teams that don’t care where/who they play…..ALONG with being in the MAC. HELL, NIU wouldn’t mind playing bigger opponents. Tell them not to be scared!!!

NIU will play anyone, anywhere, but they can’t get any decent team to come to Huskie Stadium since 2003 when they knocked off #10 Maryland and Iowa State.

You have to say that Boise State has a great home record! Only lost two games in that span by last-second missed field-goal attempts.

Michigan is Gay. I mean, GAY-GAY.

that makes no sense!

Had UMass theoretically been good enough to contend for this list, which stadium would count as “home” for them?

Probably both for their purposes.