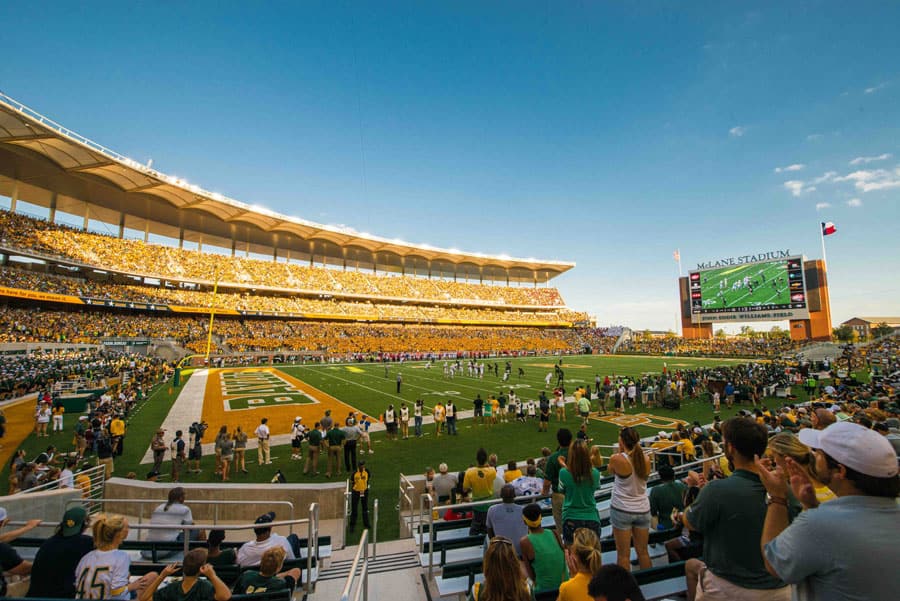 The Baylor Bears and the Louisiana Tech Bulldogs have scheduled a three-game football series for 2020 through 2022, Brett McMurphy of ESPN has reported.

Baylor and Louisiana Tech have met six times on the gridiron. In their last meeting in 1996, Baylor defeated LA Tech 24-16 to extend their lead in the overall series to 5-1.

Baylor has also added a game against the Abilene Christian Wildcats for Sept. 1, 2018, per an ACU announcement today.

The 2020-22 series against Louisiana Tech are the first announced non-conference games for Baylor for all three seasons.

Louisiana Tech has only one game announced for that period, a 2020 trip to face the UNLV Rebels.

Adding Louisiana Tech is a small step in the right direction for Baylor. The Bears have been widely criticized for their non-conference strength of schedule.

Louisiana Tech is a solid mid-major program. Last season, the Bulldogs finished 9-5 after falling in the C-USA Championship Game by three at Marshall and then defeating Illinois 35-18 in the Heart of Dallas Bowl.

In 2015, Baylor hosts Northwestern State and SMU and travels to Rice. Other future non-conference opponents for Baylor include Liberty, UTSA, Duke, Incarnate Word, and Rice.

Not good enough for Baylor, IMO. They need a P5 opponent on the schedule somewhere, preferably one besides Duke.

Yes, yet they have good “regional” OOC games on the sked, P5 or no….

You do realize the LA Tech has historically been a very good football program don’t you. It’s not like Baylor just signed up to visit an FCS school. LA Tech was 9-5 last season with a bowl win over Illinois plus in the last few years they have had wins over other P-5’s like Ol Miss, Virginia, Illinois (again) and Mississippi St. so they aren’t really a cupcake.

The soft as melted butter schedules for Baylor continue. Why not a middling PAC12 team like Washington-they need OOC games against decent teams too.If Baylor is too afraid of actually scheduling someone who would present a challenge, they can kiss goodbye ever making the national playoff picture with their cupcake OOC schedules.

When I first saw this I thought it said “Louisiana STATE”. Disappointed in Baylor.

It’s pretty sad that this is the best team on their future schedule. If Baylor expects to compete for championships, they need to schedule better OCC games.

I commend them for the one road game but other than that this is not impressive at all.

“In 2015, Baylor hosts Northwestern State and SMU and travels to Rice. Other future non-conference opponents for Baylor include Liberty, UTSA, Duke, Incarnate Word, and Rice”

That is really REALLY pathetic!

Baylor apparently isn’t getting the hint after getting passed over this year. Look at Texas’ OOC schedules. They may still have a little ways to get back to the top, but if they go 11-1, there’s no way they get passed over since almost all of their schedules look to be having TWO power 5 opponents a season! Baylor doesn’t even seem to want to schedule ONE outside of that Duke series.

That said, if Louisiana Tech was just to get the “lite” game out of the way for those 3 years so they could focus on the stronger opponents, they still could be ok. Right now that’s the only game on the slate for those 3 seasons.

You referring to the 2007 game where Cal beat LaTech 42-12? Oh you mean the game in 1997, where La Tech beat a Cal team that finished dead last in the Pac 10. The fact that La Tech beat the #10 team in P5 conference almost 2 decades ago does nothing to make Baylor’s schedule any less of a joke.

Cal fits the mold of middling P5 team to a T, and they are known to pay their coaching staff in the bottom half of the conference. Yet they can hire La Tech’s coach for 2x his previous salary. I see one P5 home and home scheduled in Baylor’s future schedules (Duke), the rest are underfunded regional schools. Hope it costs them again.

Don’t overlook the Bulldogs …..They are very capable….