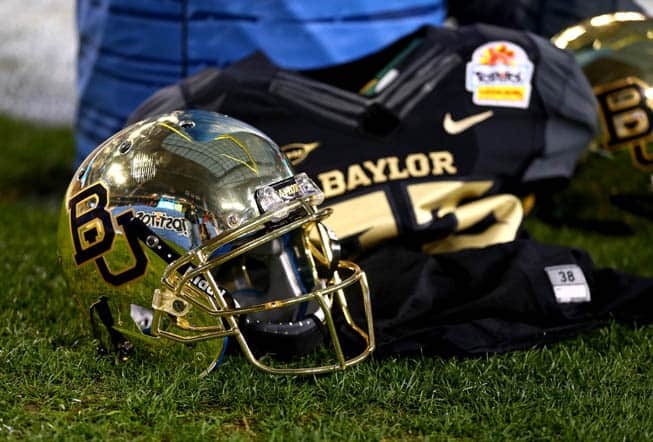 The Baylor Bears have added the University of the Incarnate Word Cardinals to their 2019 football schedule, according to an official release by UIW this afternoon.

Baylor and Incarnate Word will meet at McLane Stadium in Waco on August 31, 2019. The game will be the season-opener and first ever meeting between the two schools.

“Playing Baylor in football is just another exciting step in the growth and expansion of the UIW Brand,” UIW Directors of Athletics Mark Papich said. “We have always maintained that the move to NCAA Division I would be in line with the goals we strive for spiritually and academically. We want our student-athletes to reach for something more, to be challenged on a daily basis and to leave UIW stronger in their faith and knowledge with a sense of accomplishment for accepting those challenges.”

The addition of UIW tentatively completes Baylor’s non-conference football schedule in 2019. The Bears are also slated to host UTSA on Sept. 7 and travel to Rice on Sept. 14.

No comments on this? I expected a chucklefest by now. Toughest challenge since Utah Hoops took on Williamena and Evergreen State back-to-back.

Should have seen our mentions on Twitter. It was a snark-fest.

April Fool’s Day is stiil 2 weeks away. How does Baylor look in the mirror at this type of schedule with UTSA and Rice too! Even SEC teams who schedule a host of pasties will laugh at this set up. Is it true that Baylor is trying to schedule The Little Sisters of the Poor as soon as they get a flag football team?

Never underestimate someone. You never know what can happen. Go UIW!!!!

You have to remember to hear Baylor minions talk….no one will schedule them….No Seriously…that is their excuse.

Baylor continues to cash the checks written by UT, OU ….

Look at Oregon’s Schedule, they as well have it easy for their non-conference games.

There is rumor that Baylor is scheduling St. Olaf’s in 2020. One thing we know for sure, Baylor will not be the national champion in 2019.

UIW hoops team is in the first year in division I and managed an RPI of 229, They have a credible athletic department and will probably e a decent FCS team by 2019. It is hard to project FCS teams 6 years down the road; but it seems to me that it is equivalent to scheduling Steven f Austin or McNeese.

An FCS team 6 years down the road is still an FCS team. Baylor builds a $260 million dollar new stadium and schedules these type of teams! No offense but the Varsity should play the Varsity teams, not the junior high schools. I see that UIW has just tripled the size of their home capacity to 6,000 and a new track. It sounds like the makings of a decent high school stadium with further additions down the road.

I guess Baylor is trying to break Georgia Tech’s record. If they are going to call their own shot, I hope they win 316 – 0.

Baylor…It may be time to cancel the home and home series with the only OOC team in any Power Five conference…..Duke.

Wow Baylor. Scheduling for 2019….filling up the schedule with cupcakes…

I guess they just wanna have good stats, but what if the Big12 ever goes to four non con games. Who would they schedule next? St. Thomas Aquaintes HS from Florida?

BU should seek out legitimate natural rivals, like Texas A&M and Arkansas. I’m tired of the boring early season lineup, not to mention the indefensible ridicule over their undeserved record. Stop scheduling easy opponents; there are already too many questions about the strength of the Big 12. Keep Rice and SMU, but nix the others. I like that you have Utah out in the future, and you should seek out other high-powered opponents who will legitimize your strength of schedule.

This game is currently listed for 2020 on Baylor’s schedule.

It was originally announced for 2019 but later pushed back to 2020.