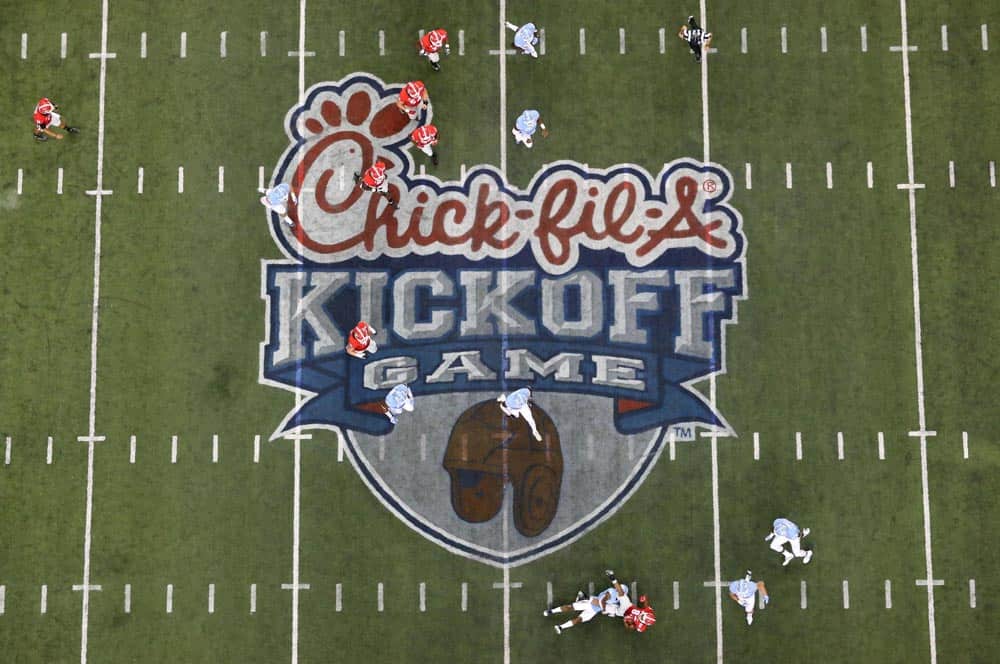 The Auburn Tigers and the Washington Huskies will meet in the 2018 Chick-fil-A Kickoff Game, both schools announced on Thursday.

The game will mark the first meeting between Auburn and Washington and it will be played at Mercedes-Benz Stadium in Atlanta, Georgia on Saturday, Sept. 1, 2018.

“We’re looking forward to the opportunity to play in the Chick-fil-A Kickoff Game for a third time,” Auburn Head Coach Gus Malzahn said. “Auburn has a great fan base in Atlanta and we’ve always had a big number of Georgia kids in our program. We appreciate the partnership we’ve had over the years with the great people at the Chick-fil-A Peach Bowl.”

“We are excited to compete in the 2018 Chick-fil-A Kickoff Game in Atlanta,” UW head coach Chris Petersen said. “I know our team will look forward to competing against a great program in what will surely be a thrilling atmosphere inside the new Mercedes-Benz Stadium.”

In order to play in the 2018 Chick-fil-A Kickoff Game, the Washington Huskies had to adjust their non-conference schedule. Their season-opener, previously a home game vs. North Dakota, was pushed back one week to Sept. 8.

A home game vs. Nevada, previously scheduled for Sept. 8, has been postponed to a future season. Washington’s third and final non-conference game, which was unchanged, is a trip to face BYU on Sept. 29.

Auburn now has three non-conference games announced for the 2018 season. The Tigers are also slated to host Southern Miss on Sept. 29 and Alabama State on Nov. 17.

Guess Washington already foresaw needing to up future schedules that the CFP just held against them.

They already had Michigan scheduled for 2020 and 2021 and they couldn’t foresee the dumpster fire Rutgers has become eight years ago when they scheduled the series.

Hey, it is better than two Sun Belt teams and an FCS in late November.

Agreed! Striking while the iron is hot, now that Washington has a good team they are being asked to play in an neutral site game of course against an SEC team as usual. Washington had & has their fair share of smaller teams to play, they will not miss out.

Just another case of the SEC scheduling a win out-of-conference.

Joe, you somehow manage to get dumber by the post.

At least your mother likes me.

In other news, the SEC East has been relegated to the FCS

Kewl you should come up with that. Exltelcne!