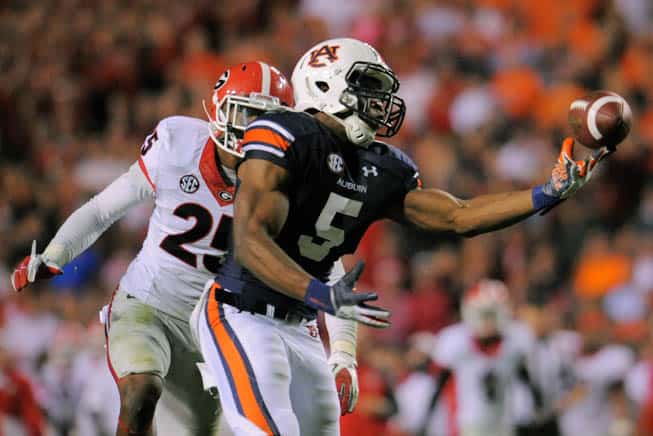 Auburn didn't play this week but moved up to 4th in the BCS. (Shanna Lockwood-USA TODAY Sports)

The Auburn Tigers have moved up to fourth and the Missouri Tigers to fifth in the Week 14 BCS Standings.

Auburn, which was off this weekend, moved up to 4th from 6th. Missouri, which won at Ole Miss 24-10, moved up three places from 8th. The Tigers jumped over Clemson.

Both Auburn and Missouri benefited from losses in the Top 5 this weekend. Baylor fell from 4th to 9th after being crushed by then #10 Oklahoma State 49-17.  Oregon dropped eight spots to 13th after being thumped by unranked Arizona 42-16.

NIU’s move up was big because they jumped Fresno State, now 16th, for an at-large berth to a BCS bowl.

Listed below are the complete Week 14 rankings.

If the season ended today, these are the BCS Bowl selections:

I think Missouri and Oklahoma State would roll. Other matchups look good though.

What is wrong with 1A college football —ten simple fixes to problems-
1. Assumptions about power conferences and an inherent bias in the AQ/Mid-major set-up. Every conference can be a power conference if recruiting, money, name prestige were evened out. Solution—16 team playoff with EVERY conference winner (10) and six (6) at-large spots. Florida Atlantic wins the SunBelt? Good, they play Alabama in playoff week 1. SEC strong? Good, give them three playoff spots (1 champ, 2 at-large)
2. Pre-season rankings–why??! How about rankings begin in week 3!
3. Teams setting their own out of conference schedule. In what other athletic venue (with as few games as gridiron football) do you see a team create it’s schedule for 25% of the fixtures? Solution? NCAA schedules one out of conference road, one out of conference home game for each team
4. Lack of a minor league for the NFL. Using NCAA football as a farm system. Solution? NFL should do the ethical thing and create a two-tiered system or the NFL2/NFLDL. Not only because the exploitation of the college athlete has gotten out of hand, but because listening to press conferences, you can tell some of these guys don’t belong in a classroom.
5. Wacky rankings. Oregon and Baylor were just blown out. Oregon’s opponent wasn’t ranked. Stanford has lost two games to teams that were unranked at the time. Sorry, you are no longer top-12 material. Solution—punish bad losses even more than nailbiting losses.
6. Too many bowls. Solution—Semi-final games for the right to win a bowl. A four team field for the Holiday bowl, for example.
7. (Also connected to (6.)) Too long a layoff between championship week and the heart of the bowl season. Three weekends off? That’s ridiculous. See number 6 for the solution.
8. Conference inequity (make a conf. championship game mandatory)
9. Game hosting bias–enough with teams having 8 home games and going on the road only four times for mandatory conference games. 7 home games max. 8 allowed if hosting a championship game. In what other sport do you see such a thing?
10. Start season earlier and end later. I’m bored in January and need more football…..

There is something wrong when a team runs the table but can’t contend for a national title. Doesn’t matter how cupcake the schedule is–you win out, you need a place at the table.