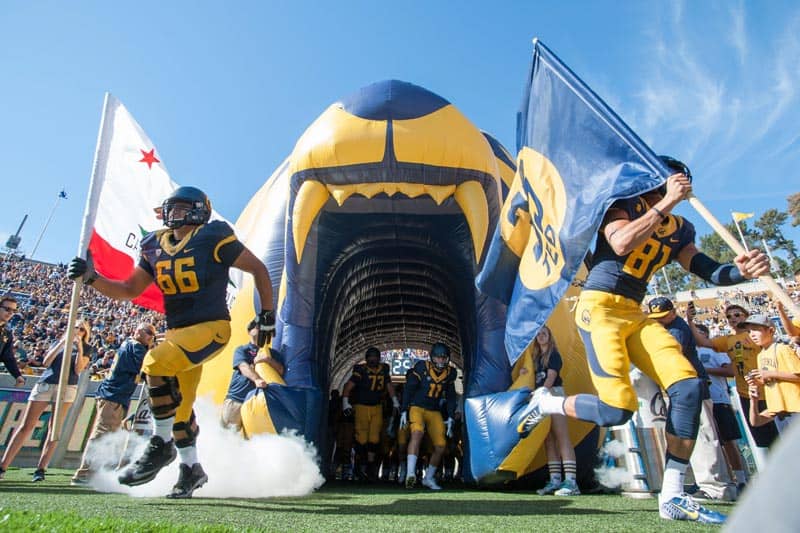 The Auburn Tigers and the California Golden Bears have scheduled a home-and-home football series for 2019 and 2020, Cal announced today.

Auburn will host the first game of the series at Jordan-Hare Stadium on Sept. 21, 2019. The Tigers will then travel to face the Golden Bears at Kabam Field at California Memorial Stadium on Sept. 19, 2020.

The 2019 game will be the first ever meeting between the two schools, which are separated by over 2,400 miles.

“Over the past several years, we have been able to add several new opponents to our schedules that we believe our fans will enjoy seeing and our team will be excited to play,” Cal Interim Director of Athletics Mike Williams said. “As a traditional power from the Southeastern Conference, Auburn certainly fits that description and provides us another opportunity to face a school with a strong national profile.”

In addition, Cal was previously scheduled to travel to BYU on Sept. 16, 2017 to complete a home-and-home series that begins later this season (Nov. 29). Today’s release indicates that the 2017 contest in Provo has been moved to Sept. 8, 2018.

For Auburn, the series with Cal satisfies their strength of schedule mandate for the 2019 and 2020 seasons. The Tigers also play a home-and-home series with Clemson in 2016 and 2017.

I agree, I just love seeing people complain about the SEC not wanting to play PAC-12 teams or flying out to the west coast then this happens. SEC vs PAC-12 will be great ones.

I was just playing a NCAA Football 14 game with these two (Auburn fan for life), and i was wondering to myself, “If only Auburn and Cal could play eachother”. Who knew?

An Auburn fan not working? What are the odds! Keep those deep insights of yours coming Simple Jack…

I am waiting for Florida, Alabama, Arkansas, Mississippi, Kentucky, South Carolina and Georgia to do likewise. Florida never leaves the south let alone Florida for a home & home, Georgia pulled a Kansas St. and canceled an Oregon series, Mississippi has never played in the west other than 2-1 with hapless Fresno St. Alabama has been west since 1978 @ Washington. Maybe the fans are finally going to get their wish and not see UT/Martin, Georgia St., Troy, Elon, Presbyterian, Furman, The Citadel, Jacksonville St., and all of the other Southern cupcakes lining up for severe butt kicking and a fat check to keep their meager programs alive.

Georgia played home-and-home with Oklahoma State, Arizona State, and Colorado within the past 10 years. They also have scheduled Notre Dame.

Necro post here, but I remember in the early 90’s Florida visited Syracuse @ the Carrier Dome. Syracuse was a much better football program then and they blew up Florida that day. I don’t remember Florida playing a non-bowl, non-conference football game outside the state of Florida since.

“Maybe the fans are finally going to get their wish and not see UT/Martin, Georgia St., Troy, Elon, Presbyterian, Furman, The Citadel, Jacksonville St.” That may have to include the fans from the BIG, ACC & BIG12 since these teams play those conferences as well.

And it will be another two decades before Alabama plays another home and home out west. And a decade to play a home-and-home anywhere. Those so-called neutral site games are so addictive.

What’s with the non-conference schedules of Missi St and Missi? The playoff committee will see the weakness. With schedules like that they neither deserve a spot in a ‘New Years Six’ bowl. Its good to see the SEC finally enforcing Miss and Miss St to up their competition in 2016.

So who will Missi and Miss St schedule in 2016? Arizona, West Virginia, Kansas St or Boston College?

Now if the SEC would go to a 9-game conference schedule, we would be able to objectively discuss/compare schedules. Just a matter of time the SEC comes to their senses.

“And it will be another two decades before Alabama plays another home and home out west.” There are no facts behind this, anything can happen in 20yrs. I can not stick up for Miss St & OLE MISS but do know that OLE MISS played a home n home with Texas, played BYU & Boise St, have future schedules with Ga.tech & W.Forest. Miss St played Oklahoma St this year, has added K-State, NCST & Zona for the future. I can only see more injuries comes from a 9-game schedule in the SEC, not making excuses but is seems like when SEC teams play each other there are about 3-6 injuries every game. I am not against a 9-game schedule but as of right now, it is what it is.

It’s football, day. Everyone gets injured. SEC isn’t the only team who gets hurt 3-6 times a game. You sound like a moron. The SEC benefits from games close to home, a horrendous out of conference schedule, and east coast reporting bias.

@day, You’re avoiding all the facts and missing the point.

And that is why the SEC rules have been changed. Those programs would not ‘voluntarily’ improve their schedules so the SEC had to take action.

At any rate we are finally seeing the effects of new SEC rule. Good for college football overall. Next step is a 9-game conference schedule. Coming soon.

All conferences are going to a more up-grade scheduling process, not just the SEC, that is why you also see BIG, BIG12, PAC12 & ACC adding more P5 games to their schedules so they can make sure they have a chance at the playoff. As to the SEC OOC diminishes the schedule, right now you have #1 Miss St, #3 Bama, #4 Auburn, #7 Ole Miss & #9 Gerogia, if you would like your team to play all 5 of these teams, be my guest. NCAA knows how powerful & strong the SEC teams are so they are ranked accordingly, four of the top 10 teams are from the west (as of right now) till they beat each other out.

Look at the ratio of P5’s OOC to FCS..the SEC is the worst

Who can blame schools like Alabama for doing neutral site games? They get a big check to do it.

How much more money does Alabama need? Isn’t this college football? Why doesn’t Alabama play 4 neutral site games and 8 conference games if money is the most important factor.

This series is a step in the proper direction. Now if we can get others in the SEC to follow maybe there will be further respect given. Auburn is just one of 14 schools, this does not make for a majority by any means.

I’m 81, from Auburn, would prefer less distance, but glad to see good games. PS, some people complain about referees, but they do a much better job than we could.