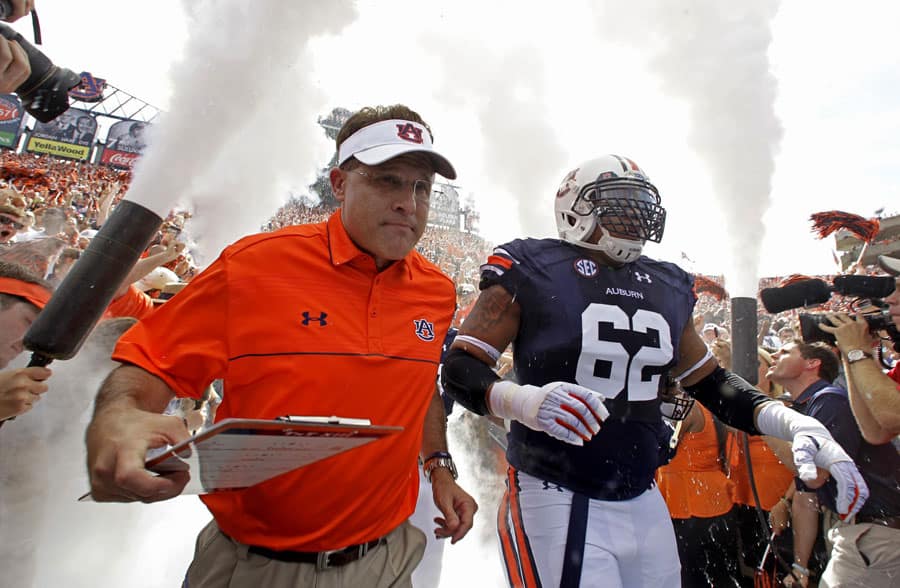 The Auburn Tigers have completed their 2017 non-conference football schedule, which includes games vs. Georgia Southern and at Clemson.

Auburn will open the 2017 season at home on Sept. 2 against the Georgia Southern Eagles. The game, which was officially announced on Monday, will be the second meeting between the two schools. Auburn won the first matchup 32-17 back in 1991.

The Tigers then hit the road for a big game at “Death Valley” against the Clemson Tigers on Sept. 9. The game is the second of a home-and-home series that begins in 2016 at Auburn’s Jordan-Hare Stadium.

Auburn and Clemson first met in 1899 and have played a total of 49 times on the gridiron. Auburn leads the overall series 34-13-2, but Clemson has taken two straight, including the 2012 meeting in the Chick-fil-A Kickoff Game in Atlanta.

On Sept. 16, 2017, Auburn hosts the Mercer Bears, a member of the Football Championship Subdivision (FCS). The Bears reinstated their football program in 2013 and have gone 16-8 since then.

Auburn’s final non-conference game of the 2017 season is a home tilt against the ULM Warhawks. That game was confirmed to AL.com via an administrator at Auburn. The Tigers have faced the Warhawks nine times on the gridiron and won each contest, the last a close 31-28 victory in 2012.

Legit schedule overall. Clemson as good as an OOC game as there is. Nothing but respect for scheduling Georgia Southern- were a great 1AA triple option team and will be a great D1 triple option team. Louisiana at Monroe, you guys can hate all you want but show some respect, it’s not an FCS team, they only play one. Looks good to me… What do you guys think… Anyone ever take that advice about buying SCTY? Missing out…

ULM beat Bama not that long ago, too. Overall, the schedule’s far tougher than Baylor’s. Mercer at least isn’t as pathetic as Incarnate Word or Houston Baptist — at least Mercer’s committed to becoming a top FCS program. Georgia Southern did just go 8-0 in their conference and SHOULD have beaten Georgia Tech on the road (and were it not for referee ‘home-cooking’ would have), after beating Florida in Gainesville the year before. With the AT Mizzou, Arkansas, LSU, and A&M games, plus Georgia, State, Bama, and Ole Miss at home, this is a schedule you won’t see any XII schools match. Having to get Georgia every year sure is a pain. Not hitting at least one of UT, UF, Vandy, or UK (the weakest of the SEC Least) sure sucks!

You say it’s better than Baylor’s like that is really saying much..

If you have 4 OOC games, you should schedule 2 P5 schools at the minimum. Anything below that is inexcusable in my opinion. That gives you 8 conference games plus 2 P5 OOC opponents. Having 2 games to schedule whoever you want is MORE THAN ENOUGH! Nobody needs 3 non P5 schools on their schedule and this goes out to everybody practicing this, not just Auburn or Baylor..

Most of the big SEC schools want 7 home games per year for the additional revenue. That’s pretty much the bottom line here.

I’m inclined to agree with Travis, for a top-flight P5 program there should be at least 10 P5 (or Notre Dame/BYU) games on their schedule. For example, teams in conferences that play 8 in conference should play 2 outside, and teams that play 9 in conference play one additional P5 OCC.

I don’t want to hate on Auburn, since they’re one of the few SEC schools that have shown a willingness to play outside SEC land for home and homes, but they could do better here.

Baylor should only be an example of how NOT to schedule.

If Auburn ends up back on top in the SEC West, they WILL have 10 P5 games. 8 SEC games are P5, the game with Clemson is P5, and the Conference Championship Game is P5. So, if they’re in the national title discussion, they’ll have ten. Baylor, will only have 9, period.

David we are talking about 10 P5 games in the regular season. This is before CCG/bowls/playoffs. Several teams already do it in the regular season and there isn’t a good reason why some teams cant follow suit. Everything in defense of it sounds like nothing more than excuses. There is absolutely no reason that a big name program needs 3 games against smaller programs that they will most likely beat up pretty good. NO REASON!

Also David, we know Baylor schedules terribly. Comparing yourself as better than them isn’t saying much.. Also again 10/12 games against P5 isn’t asking much, teams should want to do it, challenge themselves, and show how good they are. It’s good for the fans. If a team makes the CCG (like you said) it should be 11/13 against P5. 9/12 or 10/13 isn’t anything special to brag about..

Yeah and Kevin Kelley it’s a shame. Most schools play 6 some years and 7 on others. I wish teams didn’t have full control of their schedules so the fans would see greater competition.

Travis, well, four XII schools max out at 9 P5 games. And a conference championship game is something they won’t face. Geesh.

Yeah I agree David! My comment was directed at ALL P5 schools from all P5 conferences. I don’t know why you’re getting so defensive. I wish all 5 conferences played by the same rules: 9 conference games, 1 P5 OOC game = 10 P5 regular season games. Then after that ALL conferences have CCGs. Then onto the bowls/playoffs. This is what I wish for and it would be better for CFB and the fans. Nobody needs more than 6 home games and nobody needs more than 2 games scheduled against lesser competition.

You know what Kevin Kelley?

But this is possible with still playing 10 P5 schools. Everything else just sounds like excuses. You can make it happen. Now I know scheduling isn’t always easy but to regularly only schedule 9 with 3 cupcakes is obviously a lack of effort. It might not work every year due to scheduling complications but you should be able to make it happen more often than not to really challenge yourself.

Problem solved. 10 Power 5 schools and 7 home games. Looks like a lack of effort if anything. Again, nobody needs more than 2 games against overmatched competition. 3 or 4 is ridiculous.

It really isn’t that difficult. The cupcake games really need to stop at all levels. All conferences and teams that practice this. Nobody needs more than TWO!!!

Georgia Southern should have beaten NC State too. They were ahead for about 58 minutes and fumbled on State’s goal line late in the fourth quarter.
I’m not going to be surprised if they finish 2015 ranked in the top 25. Every P5 conference has at least a couple of teams that isn’t as good as Ga Southern

Schedule a legit PAC or Big 10 program. Playing Clemson and staying in the south for OOC doesn’t scream respect. With the playoff here their OOC is average at best. SEC needs to realize that playing against each other won’t be enough like it was during the BCS. Want respect? Schedule home and homes with OU, USC, Ohio State, Texas, Oregon, etc. Do that and dropping a game or two in the SEC won’t carry as much weight and voters will applaud the OOC.

Auburn went on the road to Kansas State last year, and they start the season away from home to face Louisville. If you want to talk about cheap schedules, let’s talk Ole Miss or Mississippi State.

Oh, Auburn’s done home and home with USC not that long ago, too.

Not including bowl games. And for this discussion BYU considered P5 program.

Not a very impressive schedule. Better than Baylors

I agree with a lot of what people have said. At Clemson, plus a tough out vs. Georgia Southern and then the game where everyone stays fresh against ULM. No problem with that. Moreover, the Clemson tilt is part of a home and home. I love neutral-site kickoff games, but Bama playing in Atlanta @ Va. Tech or West Virginia is hardly a neutral game.

The only part of the Auburn schedule is the Mercer game. If they have another game available to play they should at least player another P5 team, and I don’t care who. A 6-6 Pitt or Syracuse or Indiana is better than an FBS game.

The argument that the local community suffers from the lack of an “eighth” home game does not hold water as nearly every other top team outside of the SEC or (Baylor) play 6-7 home games a year or lose an “eighth game” because they schedule home and home’s. Eight SEC schools will only play four true road games this year.

Or, to put it another way. Clemson has Auburn and South Carolina. Do not care if either finishes at 6-6 or 7-5. The word is “intent.” They intended to have two tough OOC games. If they have Clemson and USC on the sched, the other two opponents are insignificant……Georgia always has GT plus a game with UNC, and a series with ND coming up. A bit disappointed with LSU’s future schedules……They used to play epic OOC games. In 2011 they played pac champ Oregon and Big East champ WVU in the same season……

They also just lost one game, albeit the NC, which they had to give to Bama……

Maybe that is why their are more directional games on their sched’s now. Why beat the best around the country and in your region, just for a rematch and lose the crown because of one game……….

Damn, college football. Why do I care so much????

Regardless of what’s on the schedule…. you have to win them all to be in serious consideration. And if you do lose one… it better be to a top-flight P5.

As an Auburn fan I would be happy with 1 power 5 game if the other 3 were against 1 Sun Belt/MAC team and 2 American/ C-USA/ Mountain West teams. I do not want 2 Sun Belt teams in the same season and no FCS teams.