Army to play UConn at Yankee Stadium in 2014, In Discussions to play Notre Dame in 2016 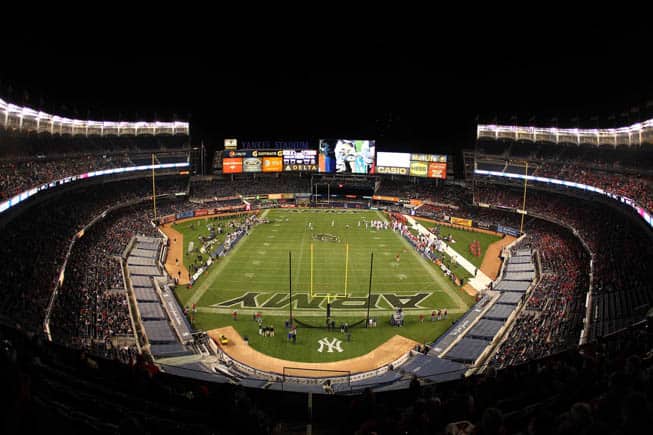 The Army Black Knights will play the UConn Huskies at Yankee Stadium in 2014, the Times Herald-Record has reported.

Army and UConn will square off on Nov. 8, 2014. UConn replaces Boston College, who was originally scheduled as Army’s 2014 opponent.

The two schools will also meet at Rentschler Field in East Hartford, Connecticut on September 12, 2015.

Army and Connecticut first met in 1979 and have played five times overall. The Huskies lead the series 4-1 and have won four straight over the Black Knights.

The Army-UConn match-up is part of a five-game agreement the Black Knights have with the New York Yankees. Army faced Notre Dame at Yankee Stadium in 2010 and Rutgers in 2011.

Army is scheduled to face Rutgers again in the Bronx on Nov. 21, 2015 and is in discussions with Notre Dame to take on the Fighting Irish in the final game of the contract in 2016.

Army and Notre Dame have faced off 48 times since their first meeting in 1913. The Fighting Irish lead the series 36-8-4 and have beaten the Black Knights in 14 straight.

Yankee stadium is meant for baseball. The seating for football is awful. Look at how far the seats are from the field and the terrible viewing!

Jeez! Go on a fade route and you end up in the dugout.

*that should be Wrigley Field, I’m going to blame the sinus infection on that pretty bad mix-up.