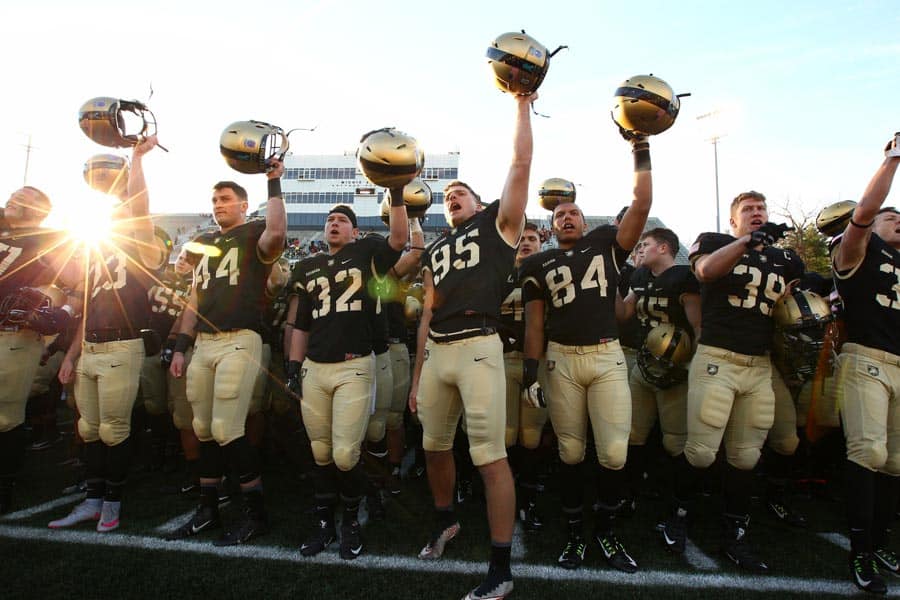 The Army West Point Black Knights have officially announced their 2016 and 2017 football schedules.

Army opens the 2016 season on Sept. 3 at Lincoln Financial Field in Philadelphia against the Temple Owls. Other road games in 2016 include UTEP, Buffalo, Duke, Wake Forest, and Notre Dame (at San Antonio, TX).

Home games in 2016 include Rice, Lafayette, North Texas, Air Force, and Morgan State. The 2016 Army-Navy Game is set for Dec. 10 at M&T Bank Stadium in Baltimore.

In 2017, the Black Knights again open the season on the road, this time at Tulane on Sept. 2. Other road games in 2017 include Ohio State, Rice, Air Force, and North Texas.

Home games for Army in 2017 include Buffalo, Duke, UTEP, Eastern Michigan, Temple, and Fordham. The 2017 Army-Navy Game is slated for Dec. 9 at Lincoln Financial Field in Philadelphia.

If a private school hosts a service academy, can they treat the payment as a tax write-off?

If Army get bowl eligible, what bowl do they have a tie-in with?

Just looking at the schedule for both the up and coming years, Notre Dame and Ohio State would appear as losses. Army at best is a mid major. The glory days are well behind them. I remember their championship years of the 40’s and 1958. It’s sad. It’s impossible for them to get legit division one players. That said, I will always be rooting for them.

Navy has been competitive in D1, and has gone to 7 straight bowl games. No reason Army can’t get their Mojo back. On, brave old Army team!

I was born and raised in Ohio and I served 20 years in the U.S. Army. I have always been a lifelong Ohio State Buckeye fan but when Army plays Ohio State in 2017, I will be taking off my Buckeye gear and putting on my army cap and Jersey and rooting for Army. My allegence will be for the men who give their lives to defend this America’s freedom so Ohio State and other institutions can exist!!!!!! It will be the only time I cheer against Ohio State.

Wally, the reason Army cannot get the quality players that Navy gets is because given a choice, the potential recruit would prefer to be aboard a ship than in a fox hole in time of war.
Having said that, if the country were to go back to a mandatory draft, numerous draftees would be willing to go to the Academy knowing they would be out of “harms way” for four years.
W.W.II was a major reason that the service schools had the best football players.
Also, after the 1958 season, The superintendent at West Point started to place a number of restrictions on the recruiting and emphasis in football. That is the reason Colonel Blaik retired.

Chuck, The following shows your reasoning to got to USNA compared to USMA is somewhat out of line. Navy’s potential recruits are willing to jump into a “foxhole” as much or possibly even more than Army grads. I do think that the Navy does offer more diverse opportunities serve the country than the Army does though:

ANNAPOLIS, Md.—The 32 seniors on the Navy football team received their Service Assignments this afternoon in ceremonies at the Naval Academy.

Service Assignments for the Class of 2016

Steveo,
Your accurate reporting of Navy grads and their service branch choices is greatly appreciated. For some reason, some West Pointers seem to feel that Navy Athletes ” get over ” their service obligations, less dangerous, etc. We should equally appreciate all our sons willingness to serve , no matter which Academy they attended and played D-1 sports.

We know Morgan State hasn’t had a strong team in years. However, schedules for the most part are drawn up a number of years in advance. Can’t be sure what a team will be like four or five years down the road.
That said, I think this game was scheduled as a “confidence builder” for Army. In other words this game is seen as a probable victory for the Black Knights. The players have to know that they will have a reasonable chance to win some football games.

These guys may get to 5 wins this year, so many losses by a field goal last season /gotta love the black knight defense, gotta love guys like king, timpf, England,moss. This defense is going to be a good one in the 2016 campaign- watch out Irish – black knights are better than you think