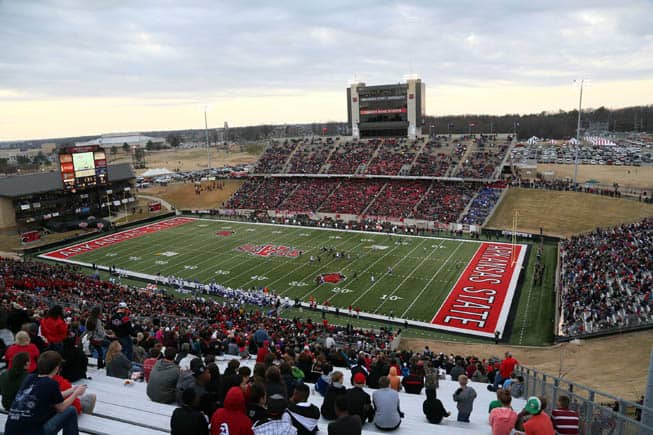 The Arkansas State Red Wolves and the Miami Hurricanes have scheduled a home-and-home football series for 2014 and 2017, ASU officiallyannounced today.

An exact date has not been scheduled for the first game at Sun Life Stadium, but it will be played in either August or September of 2014. The second half of the series will be played in Jonesboro on Sept. 9, 2017.

Miami and Arkansas State have played once before. That game at the Orange Bowl in Miami, FL (1997) was won by the Hurricanes, 42-10.

“As our brand continues to emerge, we will keep trying to schedule home games in Jonesboro against the top teams in the country,” ASU athletic director Terry Mohajir.  “We are excited to add a home-and-home series with a program that possesses, in my opinion, a top-10 national brand.  The fact that we are able to bring teams the caliber of Miami to our stadium reflects that our own brand is on the rise, and that is a great tribute to everyone involved in our recent success.”

The Red Wolves will also reportedly play against Tennessee in Knoxville in 2014.

As for the future, the Red Wolves announced earlier this week that they will travel to play USC during the 2015 season. That game will be played on Sept. 5, 2015 at Los Angeles Memorial Coliseum.

Miami’s non-conference schedule in 2014 also includes a visit from Florida A&M on Sept. 6. The Hurricanes are also expected to visit Lincoln for the first half of their home-and-home with Nebraska. That game is currently scheduled for Sept. 20, 2014.

Good for the Red Wolves. C-USA is just around the corner!

Wow. What a big home game for Arkansas St. Good for them!

Getting Missouri to come to Jonesboro was big, but this just dwarfs that. Only negative is that the U won’t be here until 2017, but it will be worth the wait!

You really believe Miami will ever play in Jonesboro? Not a chance, they will either buy out of the game altogether or strike up a deal like FSU always does and have ASU play a home game in Jacksonville or Orlando.

Miami will always show up and play…they go anywhere and play anyone.. Happy for an up and coming program like ASU

Why in the world would Miami travel there? The players have played in high school stadiums bigger than that…