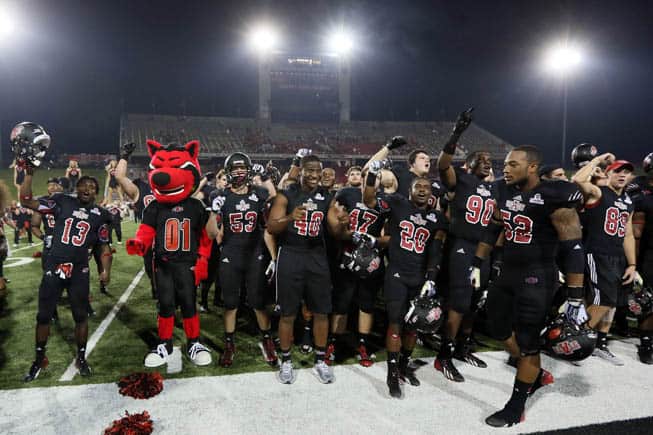 The Arkansas State Red Wolves and the Iowa State Cyclones have scheduled a home-and-home football series for 2024 and 2025.

In the first game of the series in 2024, Arkansas State will travel to face Iowa State at Jack Trice Stadium in Ames. The game will be the first scheduled meeting ever between the two schools on the gridiron.

Arkansas State will host the second and final game of the series at Centennial Bank Stadium in Jonesboro in 2025.

The series was first reported by Jeff Reed of AStateNation. The ASU-ISU series, along with three other future football games were later confirmed to the Arkansas Democrat-Gazette by Arkansas State Athletic Director Terry Mohajir.

Last week, it was revealed that Arkansas State would travel to Auburn in 2016 (Sept. 10) and would play UNLV in a home-and-home series. The Red Wolves will travel to face UNLV in 2017 and will host the Rebels in 2018.

Terry Mohajir also told the Gazette that Arkansas State will not schedule FCS teams moving forward due to strength of schedule concerns.

“It’s about the ratings at the end of the year,” Mohajir said. “The way the new selection committee is going to work, if you have an FCS win, it won’t help you. It can hurt you, especially when they’re getting down to comparing schedules. If you lose to one, it’ll kill you.”

Arkansas State is the first announced non-conference opponent for Iowa State for the 2024 and 2025 seasons. The Cyclones currently have their future schedules filled through the 2021 season.

Good on ASU for stopping the scheduling of FCS schools. Hopefully, all FBS schools will eventually do the same. Let’s agree to improve the quality of football across all divisions of college football. Best done by schools playing within their own division.

Don’t see why the 39 programs consisting of the SunBelt, CUSA, MAC, Army or UMass, should care what the playoff committee thinks. In the new environment none of these programs will ever be selected for the single access bowl berth reserved for a Group of Five program. That will always go to one of the 25 programs from the MWC, AAC or BYU. Unless No Illinois slips through the cracks. I’m not saying that is fair but that is how it will be.

If you think that the MWC has some preferred status over the CUSA, SunBelt, or MAC then that is just follish thinking.

I can’t see a 12-0 A-State team ever having a strong enough SOS if they are stuck playing 8 SBC teams. At there level it doesn’t matter if they play Alabama, Iowa State or Savannah St.