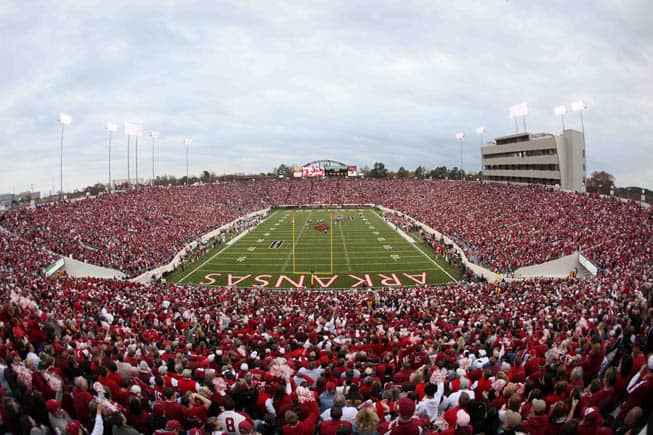 Under a modified and extended agreement, the Arkansas Razorbacks will play one game per season at War Memorial Stadium in Little Rock, the school announced today.

Arkansas will play one game each season from 2014 through 2018 at War Memorial Stadium, which will consist of two SEC games and three non-conference games.

The first game will be a conference match-up against the Georgia Bulldogs on Oct. 18, 2014. It will mark Georgia’s first appearance in Little Rock and the 14th overall meeting between the two schools. Georgia leads the series 9-4.

Arkansas previously entered into an agreement with War Memorial Stadium in 2008 which had the Razorbacks playing there two games per season. The modification returns one game per season to the University of Arkansas.

The 2008 agreement was modified and extended in part to “accommodate the changing landscape of football scheduling.” This will, according to Arkansas director of athletics Jeff Long, provide the Razorbacks with “the flexibility that will be needed to deal with upcoming schedules and on-campus events that coincide with football.”

“I am appreciative of Chairman Kevin Crass and the members of the War Memorial Stadium Commission for working in partnership with the University of Arkansas to come to an agreement that extends our commitment for two additional years while allowing us to address future scheduling challenges,” Arkansas Vice Chancellor and Director of Athletics Jeff Long.

Not surprising with Arkansas’ long-term agreement to play in Dallas that they would play fewer games in Little Rock.

Well playing in “Jerry’s house” means nothing compared to playing in Little Rock, the games here are absolutely awesome and it will be heartbreaking when Jeff Long gets his way and takes them all away. Except for the dreadful games last year we don’t lose at WMS- and I hope and pray those words still apply after Georgia. GO HOGS!

Ive been to two games in Little Rock and yes, the atmosphere there is great….but the bottom line is War Memorial Stadium is just wau to small a stadium and because its small it hurts the revanue in todays market…stadium expansion is desperately needed to continue playing there :)

What are War Memorial stadium leaders doing now (invest in stadium by increasing capacity / work with city/county leaders) to help ensure that at least one game will be played there in LR in 2019 and beyond? If nothing happens soon, I wouldn’t be surprised if Razorbacks stop playing games in LR in 2018.

It’s called tradition, such a precious, awesome, fabulous tradition. And that tradition is worth WORLDS more than what is most important to Jeff Long and that is money. He’s not from here so that tradition doesn’t mean a single thing to him. GO HOGS!