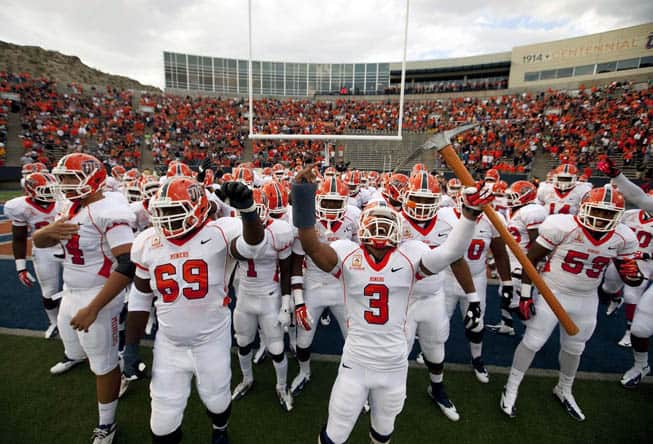 The Arkansas Razorbacks and the Oklahoma Sooners have added the UTEP Miners to their future football schedules, FBSchedules.com has learned via documents obtained from UTEP.

Arkansas will host UTEP to open the 2015 season on Sept. 5. Per the contract, the game will be played at Donald W. Reynolds Razorback Stadium in Fayetteville and the Miners will receive a $900,000 guarantee.

Arkansas now has three non-conference games scheduled for the 2015 season. The Razorbacks are also slated to host Toledo on Sept. 12 and Texas Tech on Sept. 19.

Oklahoma and UTEP signed an agreement for three games, the first of which was played on Sept. 1, 2012 in El Paso. Dates for the other two games were finalized last year. The Sooners will host the Miners in season-openers in Norman on Sept. 2, 2017 and again on Sept. 3, 2022.

Oklahoma has faced UTEP three times since 2000 and the Sooners have dominated the series, winning by an average margin of 42 points. The closest contest was in 2012 in El Paso when the Sooners won 24-7.

UTEP has also added a non-conference game against the University of the Incarnate Word. The Miners will host the Cardinals at Sun Bowl Stadium on Sept. 26, 2015. UIW will begin playing in the Southland Conference of the FCS in 2014.

The addition of UIW completes the 2015 non-conference schedule for the Miners. After opening at Arkansas, UTEP travels to Texas Tech (Sept. 12) and New Mexico State (Sept. 19) before hosting their first game of the season against Incarnate Word.