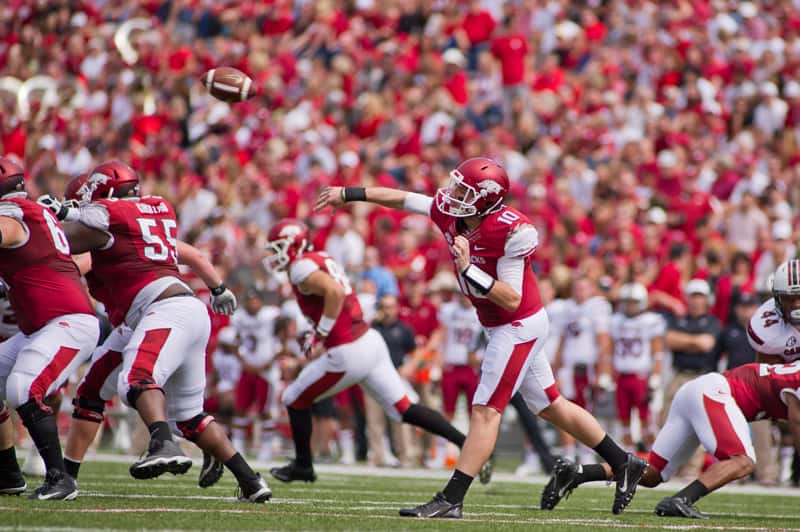 The Arkansas Razorbacks have tentatively completed their 2015 non-conference football schedule.

Arkansas had three games previously announced, and now a fourth is listed on the official website of the UT Martin Skyhawks.

UTM will visit Donald W. Reynolds Razorback Stadium in Fayetteville on Halloween, October 31, 2015. The game will be the first ever between the two schools on the gridiron.

Arkansas is scheduled to open the 2015 season at home on September 5 against the UTEP Miners. Per a copy of the contract we obtained in April, Arkansas will pay UTEP a $900,000 guarantee for the game.

A week after hosting UTEP, Arkansas welcomes the Toledo Rockets to Fayetteville. The game, which was officially announced in January, will be the first ever meeting between the two.

Arkansas’ third consecutive non-conference game is slated for Sept. 19 in Fayetteville against the Texas Tech Red Raiders. The game is the second of a home-and-home series that kicks off on Sept. 13 this season in Lubbock.

In Bret Bielema’s first season at the helm, Arkansas finished 3-9 overall and 0-8 in the SEC. The Razorbacks open the 2014 season on Saturday, Aug. 30 at the SEC Champion Auburn Tigers. The game is set for 4pm ET on the new SEC Network.

UT Martin beat memphis in the Liberty Bowl 2 years ago and has a lot of players in this NFL. Lee …

Way to challenge yourself, Bert

Texas Tech and Toledo are both good non-conference games. UTEP might be decentish. Least we’re scheduling teams we haven’t played before.

We have already played UTEP and going to play Texas Tech

I meant we haven’t played Toledo or UT Martin before.

Apparently scheduling a friendly game against Arkansas State is out of the question.

I wish … Still, UCA would be nice!

Mike, Arkansas hasn’t played a regular season game against another in-state school in the regular season of any sport in decades. Frank Broyles instituted the “No play” rule.

Yes Robert, I was aware of that policy of former coach & AD emeritus Frank Broyles. It never made any practical sense. One of Frank’s peculiar quirks. Most other state Universities do not have this dilemma. However, Frank has since retired & moved on. I definitely enjoyed my stay in the Natural State from 87 -92.

I will say that is one thing LSU has done right the last few years. They have given an in Louisiana school the opportunity to play in Tiger stadium, have very low travel expenses and get a nice payday. Since they are all state schools why not keep the money in state. I say play Arkansas State and give back a little, was Broyles worried about the no upside issue. Just beat them as you should and everyone wins.

Your comment seems plausible to most normal thinking folks. It was the fact that Frank Broyles operated on a different wave length than most other people. He alleged divided loyalties which was absurd. Ohio State had a similar scheduling policy for a long period of time. Now they play all the Div I schools in the state on a rotational basis. Wonder if there is a divided loyalty issue in Ohio.

Hog Fan that would love to see us play A-State!! Keep the cash in state. What a sell out that would be.

The coach as well as others consults with the AD regarding scheduling. The AD does not operate in a vaccum.

dang hogs will always be a mediocre team! Should go play in ConfUSA

Hogs are an eyelash away from being a 10-2 team — Had Bama beat, A&M Beat, Auburn close, Miss St -could’ve easily won. Should beat Ole Miss and LSU both at home.

I TOO WISH WE PLAY STATE IN FOOTBALL AND MAYBE CENTRAL ARK. IN BASKETBALL. BUT AS LONG AS FRANK IS AROUND,HE STILL HAVE INFLUENCE.EVEN THOUGH HE’S RETIRED I ALWAYS HATE THAT ( NO PLAY RULE )

After Frank Broyles is long gone, UA & ASU can start playing each other on a regular basis. Call it the ‘Frank Broyles Classic’ in his honor.

Another weak OOC schedule. Nothing new for Arkansas, they have long refused to play most geographically close teams in the Big10, Big8/12, SEC teams (when they were in the SWC) opting for CUSA, SunBelt level opponents.
Look how close Arkansas is to Iowa, Nebraska, Iowa St, Kansas, Kansas St, Missouri, Oklahoma and how few times they’ve played those teams.
Garbage scheduling.

Due to recent conference affiliation, the Hogs play the Mizzou Tigers now. Should be an excellent annual rivalry game.