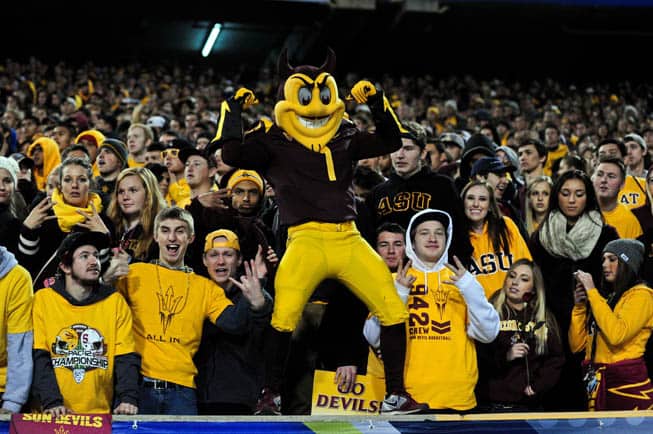 The Arizona State Sun Devils and the Texas Tech Red Raiders have finalized a home-and-home football series for the 2016 and 2017 seasons, both schools officially announced this evening.

Rumors of the series first surfaced on Christmas Eve via SportsRadio 1340 The Fan in Lubbock, although the match-up turned out to be for 2016-17 instead of 2017-18.

“This is a series that addresses several criteria that we have in football scheduling,” said ASU Interim Director of Athletics Dr. James Rund. “It is important for us to schedule home/home series with schools that are located in the Western portion of the United States. The state of Texas destination offers our fan base with an easy trip to make to watch their beloved Sun Devils play. Texas Tech is a first-class institution representing the powerhouse Big 12 Conference. And our football staff, led by Head Coach Todd Graham, recruits heavily in the state of Texas.”

Arizona State has now tentatively completed both their 2016 and 2017 non-conference football schedules. In 2016, the Sun Devils are currently slated to host Northern Arizona on Sept. 3 and travel to UTSA on Sept. 17.

The series against Arizona State gives Texas Tech two non-conference games for both 2016 and 2017. The Red Raiders are currently set to open the 2016 season at home vs. Stephen F. Austin on Sept. 3. In 2017, Texas Tech was supposed to travel to Houston on Sept. 16, but that game will now require a new date.

“We are excited to once again bring this level of non-conference opponent to our campus and community, following the Arkansas series,” said Kirby Hocutt, Texas Tech Director of Athletics. “We have a tremendously supportive and passionate fan base in Lubbock and West Texas that will really enjoy this game.”

In their first and only meeting back in 1999, Arizona State defeated Texas Tech 31-13 in Tempe.

Their second ever meeting will be in on Monday, Dec. 30 in the 2013 National University Holiday Bowl. The game will be televised by ESPN at 10:15pm ET.

So what happened to the UTEP series and the NIU single game?

Please take back Colorado-what a mistake to move them to the PAC12, Utah can go with them too. I would rather see BYU and Boise State in their place.