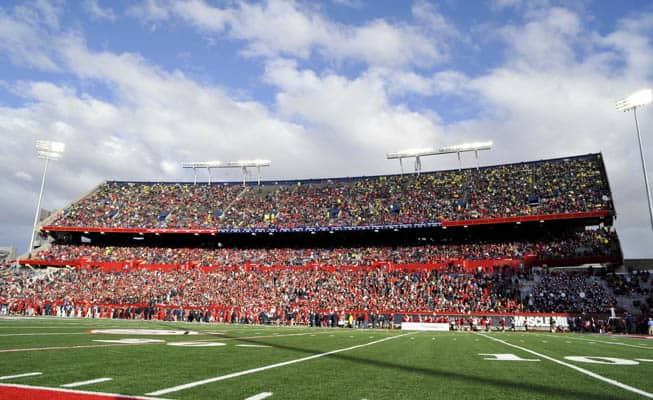 The Arizona Wildcats and the San Diego State Aztecs have scheduled a home-and-home football series for 2021 and 2022.

Arizona will host the first game of the series at Arizona Stadium in Tucson on Sept. 11, 2021. In the second and final game, Arizona will travel to face San Diego State at Qualcomm Stadium on Sept. 3, 2022.

Arizona and San Diego State have met 15 times on the gridiron and the Wildcats lead 10-5. In their last meeting in 2001, Arizona beat San Diego State 23-10 at Qualcomm Stadium.

SDSU is the first announced non-conference game for Arizona for the 2021 season. In 2022, the Wildcats are also scheduled to host Mississippi State in the first game of a recently announced home-and-home series.

Arizona is the first non-conference opponent scheduled for San Diego State for both the 2021 and 2022 seasons.

How do so many of the other MWC teams get games scheduled on a home & home basis with the likes of UCLA, Arizona, Arizona State, California and individual games with USC and Stanford and yet Boise State only schedules games against the PAC12 schools from the northwest?

Why would any of the PAC-12 teams want to play on the Smurf Turf?

The Pac 12 likes to schedule regional non conference games against FBS opponents. This benefits teams like Fresno, San Jose and San Diego as they get to play the California schools frequently and Boise ends up playing the northwest schools. I don’t believe it’s anything against Boise just a matter of location.