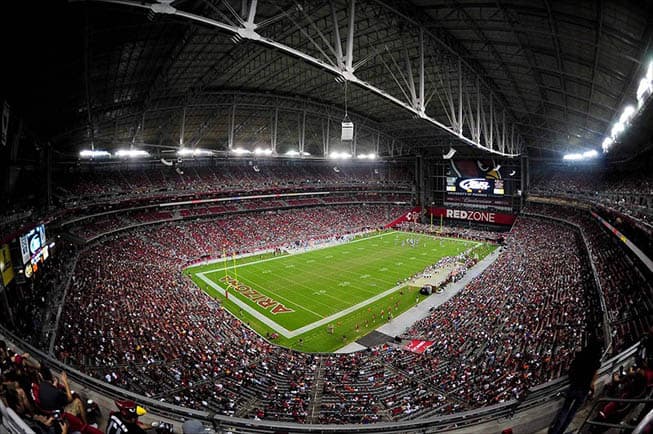 The Arizona Wildcats and the BYU Cougars have scheduled a three-game football series for 2016, 2018, and 2020, the two schools announced today via a Google hangout.

The first game will be played in 2016 at University of Phoenix Stadium in Glendale, Arizona, the home of the NFL’s Arizona Cardinals. Per the release, this game will be broadcast on the Pac-12 Networks.

“This is a great regional series and a unique opportunity for our large fan base in Arizona to see us play,” said BYU director of athletics Tom Holmoe. “Arizona has a great football tradition and University of Phoenix Stadium is an incredible NFL venue. I believe the venue and location will attract a lot of our fans in support of the Cougars.”

BYU, an FBS Independent, now has five games scheduled for 2016, four in 2018, and three in 2020. Their 2016 schedule also includes a neutral-site game against West Virginia at FedEx Field in Landover, MD.

“We’re excited to announce our series with BYU and especially playing the first game at University of Phoenix Stadium in Glendale in 2016,” said Arizona director of athletics Greg Byrne. “These three games will provide the coaches, student-athletes and fans of both Arizona and BYU with a great regional matchup. I look forward to working with BYU Athletics Director Tom Holmoe to further promote this series and providing an exciting atmosphere for our fans.”

Would have really liked to see ASU be this creative to get these games. BYU travels well and will get fans to PHX, but still home, home, neutral and the neutral game @ an NFL stadium in your state? Kills me to say it as a Sun Devil but Props to UA for stepping up and getting it done, I wish we were the ones announcing this series today.

Look for this to happen. ASU and BYU would be finalizing a deal that would send BYU to ASU in 2014 instead of Notre Dame. We go there IN NOVEMBER (yes November) of 2015 with a neutral game pushed out to 2020 in Phoenix. It would be funny if UofA announced it first, but we already had our series 2/3 done by the time they finally play.

As of tonight, they are still trying to keep Notre Dame in place. But, this is the rumored backup plan the athletic department has in place if they back out.

Have not heard about the November game, but the other years are consistent with what my friend told me.
*MEMO to ASU* Would love to still keep ND on the sched, but still sign this series.

Like the match up, was hoping for it to start fall 2014. Southern Miss is backing out, BYU still needs 2 more games in 2014.

I like this announcement for BYU. I was hoping for it to start sooner (2014) when we still need to fill in a couple games.

Not really an neutral site. But nice for BYU to get to sell half of the tickets to Arizona’s home away from home game.

Phoenix is close enough to Provo that more fans will travel than normal, and there are plenty of BYU fans in Phoenix. BYU should be represented very well at that game.

BYU will fill their own ticket allotment with their own fans. Guaranteed.

So basically another 2 for 1

Except for the travel disparities this will be a true neutral site game. BYU will fill half or more of UoP

Arizona Cougar here to cheer for BYU! Rise and shout!

@Snoopy BYU is a national team not just a Utah team–the game in Glendale (and Tucson for that matter) will be well-attended.

BYU came to BC a few years back and I was very surprised how well they traveled, they were everywhere. They bought their ticket allotment and then apparently just kept on buying. In addition to the sheer #’s they were loud.

I hope the ASU H-H-N series rumors are also true! I think a H-H-N with a Kansas or Oklahoma school we be terrific! Neutral site game in Denver!