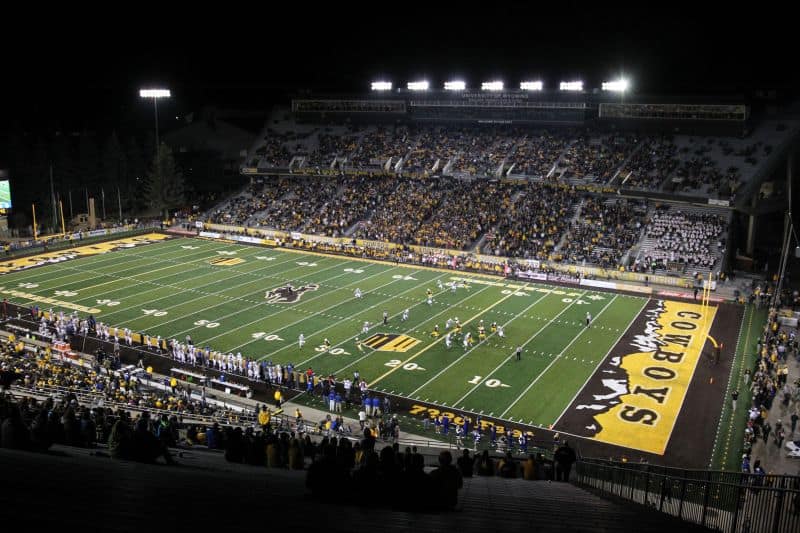 Appalachian State and Wyoming announced on Tuesday that the two schools will meet in a home-and-home series. The Cowboys will play in Boone on October 3, 2015, while the Mountaineers will go to Laramie on September 4, 2021.

Wyoming defeated Appalachian State by 46 points in the schools’ lone previous meeting ten years ago. That game was played on the Cowboys’ home field.

So both Wyoming and App St would need to cancel a previously scheduled 2015 non-conference game to fit in this game.

So which 2015 game has App App St cancelled in order to play Wyoming? The previously scheduled game with So Miss?

Thanks for the press release link. Far too often this website confuses things when rewriting official announcements.

Confuses things? No. Maybe a typo? Sure.

So with the [email protected] game also cancelled SoMiss once again needs two games for 2015.

Those Mississippi programs are having a tough time scheduling, Miss St and Ol Miss included.

Still trying to confirm if BYU-USM in 2016 is still on.

Kevin, No I was not referring to typos. As the owner/manager of this sports news aggregation website you’re biased. Thanks for not listening to your good readers,

why would you make a comment like this? I visit a lot and never sense any bias. I guess in today’s internet world it is just easy to take potshots from the cheap seats. This guy does a really great job and has always worked to improve his product. He should be congratulated.

What bias are you referring to and what have readers asked for that we haven’t provided?

You’re an idiot, Ricky. This is a great website that provides a valuable service I can’t find anywhere else on the internet.

Sometimes I disagree with content that’s written in the opinion pieces on here, but I’m not personally offended by that like you appear to be. Just relax, bro.

Poor App St. They get a 1:1 with somebody and it’s Wyoming! They are gonna LOVE those friendly Cowboys fans! Friendliest stadium AND fans in the NCAA. (end sarcasm)

I am a Cowboy fan and mother of a player. I have never seen the fans behave inappropriately or out of line but my son and the team have been treated very poorly and harassed in several out of town games. I look forward to a great game in Boone! GO POKES!!!!!!!!!!!

So what about Cowboy fans. I’ll be meeting up with some at Autzen Stadium this Saturday. And plan to visit when Oregon plays at Wyoming next season.

Speaking of Oregon, Bill Snyder forced Kansas State to cancel the series with Oregon, putting Oregon’s scheduling in a bind. (Georgia did the same).

It will be satisfying to watch Auburn whip Kansas State in Manhattan.

Thanks for the link.