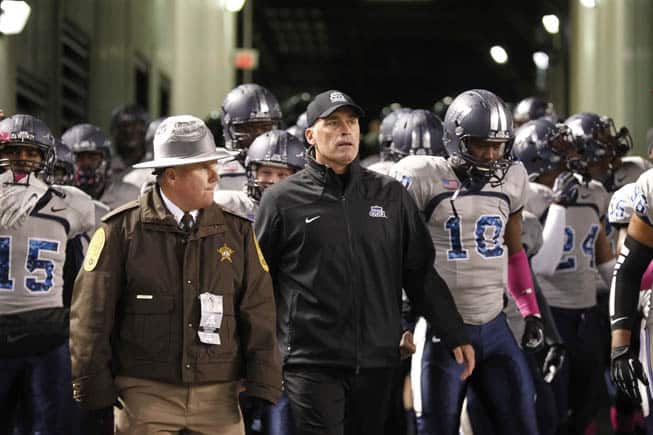 The Appalachian State Mountaineers and the Old Dominion Monarchs have scheduled a home-and-home football series for 2015 and 2016, both schools announced this afternoon.

Appalachian State will travel to face Old Dominion at Foreman Field at S.B. Ballard Stadium in Norfolk, VA on Sept. 26, 2015. The Mountaineers will then host the Monarchs at Kidd Brewer Stadium in Boone, NC on Sept. 17, 2016.

“We’re excited to announce the first of several home-and-home series that we have arranged with NCAA Division I FBS opponents,” Appalachian State director of athletics Charlie Cobb said. “We feel like it is a great opportunity for our students-athletes and coaches to square off against a quality program from Conference USA and, due to the proximity of our campuses, we think that it is a matchup that will excite both of our terrific fan bases.”

Appalachian State is currently transitioning to the Football Bowl Subdivision and will officially join the Sun Belt Conference on July 1, 2014 along with Georgia Southern.

“We are excited to add Appalachian State to our future schedule. They have been an excellent program at the FCS level and I am sure they will do well at the FBS level,” ODU Head Coach Bobby Wilder said. “Transitioning can be a challenge as we know but they have an outstanding fan base just like we do here at Old Dominion which should make for two sold out games in Norfolk and Boone.”

Old Dominion, which scheduled a 4-game series with Virginia Tech yesterday, is also transitioning to the FBS. The Monarchs officially join Conference USA on July 1, 2014.

The two games against ODU are the first announced non-conference games for Appalachian State for the 2015 and 2016 seasons. Per their release, they will also be announcing home-and-homes for 2014-15 and 2016-17 in the near future.

With the addition of ASU, Old Dominion has completed their 2015 non-conference football schedule. The Monarchs are scheduled to open the season at Eastern Michigan (Sept. 5) before hosting Norfolk State (Sept. 12), NC State (Sept. 19), and Appalachian State (Sept. 26).

The Mountaineers are the first announced non-conference opponent for Old Dominion for the 2016 season.

Old Dominion is a program on the rise. They could end up being the east coast’s (specifically mid-Atlantic) version of Boise State.

Maybe not Boise but perhaps Marshall or Southern Miss (before the recent collapse). Bright future for ODU!

They could also wind up being the Mid-Atlantic’s version of Eastern Michigan or UNLV,

no one could be Eastern Michigan bad!