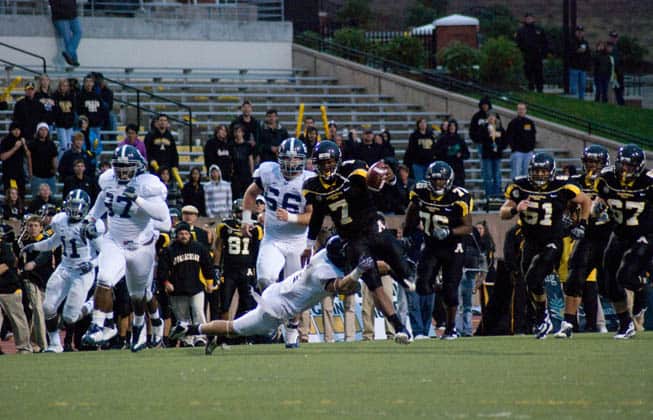 Football schedules for the Appalachian State Mountaineers and the Georgia Southern Eagles are now available on FBSchedules.com.

Both schools are joining the Sun Belt Conference on July 1, 2014. They will each be eligible to compete for the Sun Belt Championship in 2014 and can accept invitations to bowl games after the 2015 season.

Additionally, we have added 2013 schedules for all FCS teams that are transitioning to the FBS. Currently, there are four teams with that designation: Appalachian State (Sun Belt, 2014), Georgia Southern (Sun Belt, 2014), Old Dominion (C-USA, 2014), and Charlotte (C-USA, 2015).

That number will likely grow to five. The Sun Belt is combing the FCS ranks for a 12th member after Western Kentucky officially announced today they are joining Conference USA in 2014.

only logical choices for the 12th Sun Belt member.

Well since GaSo got in the SB conference then I guess that anyone can get in? People try to say Liberty in an online school but GaSo is really just a high school.

Ga Southern a High School? I bet they have one of the best records in the sun belt 2014.

Agreed. Even if the Big 12 went the BSU/BYU route, though unlikely, the MWC would take UTEP and the same dominoes would fall to take one team from the Sun Belt.

A-State in the Big 12 would be entertaining.

Have you guys looked at the FCS attendance figures. if a team can not draw well now, they arent suddenly going to draw well if they go FBS.

JMU averages 25,000 and should be able to do well with an upgrade.

Liberty (16K) and Lamar (14K) are borderline candidates; especially since Lamar is so new.

Here is a link to the NCAA report.

if we are talking stadium capacity and not on field performance, the Sun Belt should look at Eastern Kentucky, Jacksonville State or McNeese State.

We are not talking stadium capacity; we are talking attendance. There is no profit in having a bunch of empty seats.

The SBC should just close down the invitation press since it is really getting embarrassing since last month!

The school is going to be assigned to the Eastern Division so it needs to be East of the Mississippi River and South of the Mason Dixon. It should also average home attendance of 15,000 or more and have expressed a desire to move to FBS.

with travel cost, no way Delaware should be considered. Look for UD to be with UMass in the MAC.

Sources this morning are reporting Liberty will take WKU’s spot in the Sunbelt.

To get the sun belt to 12 here is how you do it.
East Division: Appalachian State, Georgia State, Georgia Southern, South Alabama, Troy, and ULM
West Division: Arkansas State, Idaho, New Mexico State, North Dakota State, Texas State, and ULL.
North Dakota state had an average home attendance of 18627, which ranks 6th in the FCS, and because Idaho is also joining it makes total sense for NDSU to join as well.

Really? Exactly who cares about the State of North Dakota?

Football-Only? I could see that. Houston baptist could be brought in as a non football member.

I would like it if the Sun Belt could get back into Florida. I think West Florida (a D2 school), could be a long term team (maybe a five year plan to transition). Pensacola is close to Mobile and Lafayette, as well as close to both Bowl tie ins. Florida Gulf Coast is also looking into adding a D1 team.

It is also close to Troy and both Georgia Schools

App state and UNC Charlotte will become the new biggest rivalry in college football because of Location to each other and interwoven fan base.