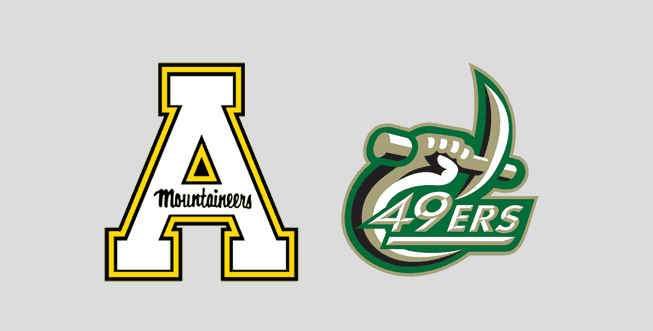 The Appalachian State Mountaineers and the Charlotte 49ers have scheduled a 2018-19 home-and-home football series, both schools announced today.

“Since Charlotte announced it was beginning a football program several years ago, it has been a priority to try to arrange a series that would be great for our student-athletes and fans,” Appalachian State director of athletics Charlie Cobb said. “Many thanks go to (Charlotte director of athletics) Judy Rose and (Charlotte) Coach (Brad) Lambert for their efforts in helping the series come to fruition. We hope that it is a series that will extend well past this initial two-year arrangement and become a showcase for FBS football in western North Carolina and beyond.”

“We are thrilled to make this announcement,” said Charlotte 49ers Director of Athletics Judy Rose. “Adding a series against an in-state opponent that has the tradition and history of Appalachian State is important to the continued growth of our program. We can’t thank (Appalachian State A.D.) Charlie Cobb and coach (Scott) Satterfield enough. We know our fans have been looking forward to this possibility and it’s a natural step as both programs transition into FBS play.”

In addition to the series with Charlotte, Appalachian State also has future home-and-home’s scheduled with Akron, Old Dominion, and Southern Miss.

This looks like it can be the beginning of a long rivalry. They are roughly 2 hours apart by car which is closer than most anyone else that App State has played recently