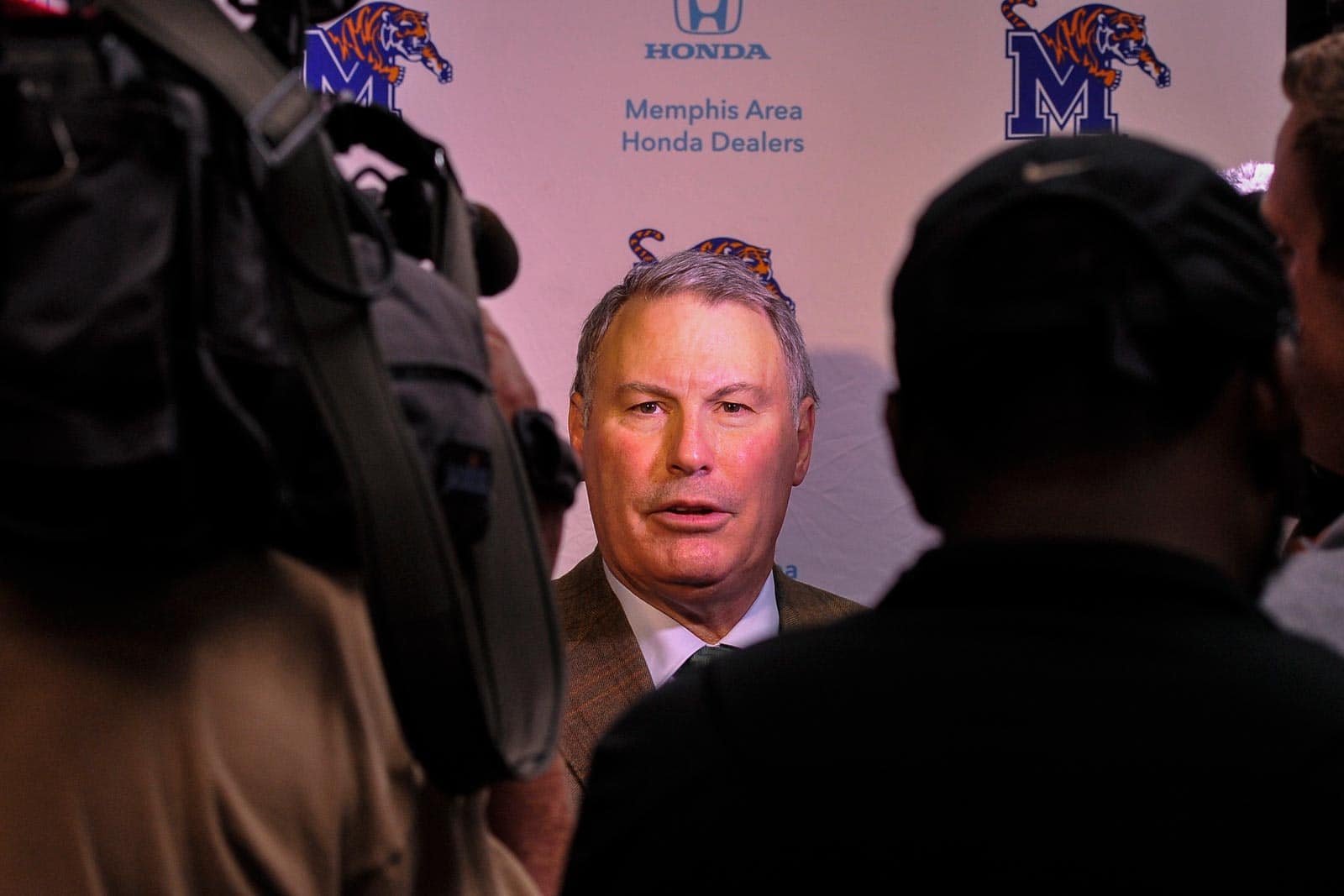 With the UConn Huskies leaving the American Athletic Conference in 2020 to become a Football Bowl Subdivision (FBS) Independent, the league will be left with an imbalance of 11 teams.

Speaking with Commercial Appeal columnist Mark Giannotto and his radio show co-host Jeffrey Wright on 92.9ESPN on Tuesday, American Athletic Conference commissioner Mike Aresco gave his thoughts on the imbalance and the talk of adding or removing a member.

In order to alleviate a division imbalance, the American has filed a waiver with the NCAA so that they can eliminate their divisions and play a conference championship consisting of the two best teams.

“We’ve already started the waiver process with the NCAA to be able to play a championship game with 11 teams and not have to play a round-robin,” Aresco said.

Under current NCAA rules, conferences that are not split into divisions can play a conference championship game if they play a round-robin schedule during the regular-season. That is, every team plays every other team in the conference.

Currently, the Big 12 is the only FBS conference that plays this format. The conference has 10 teams, plays a nine-game conference schedule, and holds a championship game.

In the FBS, teams are allowed to play 12 games per season. An NCAA exemption to rule 17.10.5.2.1 allows for a conference championship game with limitations:

Aresco stated today that he thinks the NCAA will grant their waiver to hold a championship game with 11 teams and no divisions.

“We have to get the waiver from the NCAA but I really believe that we have a good chance to get it because we have so many strong arguments in favor of it.”

If the American does receive the exemption, the next process for the conference will be determining their football scheduling format moving forward.

Add App State to replace UConn. Sun Belt can bring up Eastern Kentucky. That was who Coastal Carolina beat out for the Sun Belt spot. Also, Kennesaw State would be a good team to add to the Sun Belt. Their student population and support is huge. Only a matter of time, even though I’m sure they don’t want to add a third Georgia school.

And take a nice drink while you’re at it.

Come on in, the water is fine!

How does the Sun Belt Conference get around this?

They have two divisions.

Would like to see them add two more schools to get to 12, 6 in each division. They almost added EKU, but went with Coastal, so I think adding them plus one more, maybe Kennesaw State, would make the Sun Belt more exciting.

Just get it over with; get Army to join the conference, swap Navy and Cincinnati, then be done with it.

Which, BTW is home to Bracken Cave, where millions of bats come each year to have babies.

There are no quality (Top 85 RPI) football AND quality (Top 100 RPI) basketball schools capable of joining the AAC at this time. Large public schools in big metro markets are the preferred add schools. If schools like Georgia State (Atlanta), Middle Tennessee State (Metro Nashville), or Old Dominion (Metro Norfolk) were added to the AAC, they would have to accept at least 6 years of prorated media payments of no more than $2.5 million until they could prove to the AAC and ESPN there greater media value. By the way this is about the same amount all the current AAC members received for 6 years until they proved worthy of more consideration. Would they accept buying in?

Don’t add any teams—-stay with 11 and wait it out. In fact, no conference should have divisions. They don;t have them in basketball, do they Why have them in football?

Look at the Big Ten—you could have Ohio State at 9-0, Michigan State at 8-1 and Wisconsin at 7-2, yet Wisconsin would get to play in the B1G Championship Game because they won their division. How silly.

It’s total poppycock. There is no reason Alabama and LSU shouldn’t have rematched in the 2011 SEC Championship. There is no reason 5-3 Missouri should get chosen over 7-1 Texas or 7-1 Texas Tech, ESPECIALLY when Texas BEAT Missouri 56-31 in the regular season! There is no reason a SYSTEM should be able to have this power and take it away from the humans when it’s clear to us humans that 2 teams appear to be the clear-cut best. Even if they come from the same state.

Is there any indication Army wants to re-join a conference? Any conference?

This news confirms that either BYU or the AAC ruled out the Cougars joining the conference, either as a full member or a football-only member.

There is really no CUSA or Sun Belt team that adds any value to the 11 (12 counting WSU) remaining AAC teams.

The NCAA will grant this waiver. The division/round-robin rule is a Big Ten creation designed to limit the ACC’s and more directly, Big 12’s options for determing a conference champion. None of these major conferences care what the AAC does.

See the 3 teams and conditions I listed above.

A few options in my mind:
(1) Approach Wichita State about adding football.
(2) Let UConn stay for football until a better option comes along.
(3) Add Army.

If the Waiver is denied and they decide to downgrade to 10 teams who would go?

My guess is either Navy or Tulsa.
Navy is football only and the last school into the conference.
Tulsa is the smallest enrollment at FBS and has not excelled at any of the major sports recently.

I hope this does not happen, just a juicy topic to discuss.

No school in the east adds any value. All of the good schools in the west are too far for regular membership. Plus there is a possible fallout from the Big 12 in 2025. So the AAC wants to wait it out and try to get a waiver for a few years. Then they will cross the expansion bridge if they have to.

What are the actual arguments for it?

The argument I would make is what are the actual arguments against it? A: it’s mathematically possible to ensure that no more than 2 teams can go undefeated (which is really the only reason NCAA could possibly have with denying it), B: yearly rivalry games can be preserved, C: you can set tiebreakers that are no less fair than what we already have with geography tiebreakers and poll tiebreakers.

Allow me to elaborate on C a little bit and humor you while using 2018 Big Ten as an example. We have 3 suspects, each with 8-1 record: Ohio State (1-0), Michigan (1-1), and Northwestern (0-1). Ohio State beating Michigan, Michigan beating Northwestern, and Ohio State & Northwestern never playing. Not exactly 2 clear-cut winners here, so we need to dig a bit deeper on these culripts’ full body of work to get some more information. BUT WAIT, we can’t do that, the NCAA said, we HAVE to take a team that is located MORE to the WEST than another team. Let’s not look at (with our actual human eyeballs) which teams have the higher scoring offense, which teams have allowed the fewer points, which teams had a higher margin of victory against common opponents, which teams force more turnovers, which teams actually BEAT the other team, etc, etc, etc… NO, let’s take the team that is located more navigationally, directionally, and geographically to the cardinal west! Without any debate!

If the conference adds anyone it would have to be Army for football only. They could also add VCU or Wofford for basketball and all other sports. No one else qualifies. If they stay at 11 schools, then use the Big 10 model when they had 11 members.

Don’t forget Villanova. I believe they have every intention to return to the FBS division. The only question is whether they can have the crowd support and fill a stadium. There is still an outside chance that West Virginia may throw in the towel with the Big 12. The cost of travel is a strong factor. And, with the addition of WVU there would also be a chance of Notre Dame reconsidering their agreement with the ACC and also switch to the AAC. LOL. Of course then the Big 12 would need to replace WVU, and they would have to steal Wyoming, Colorado State and New Mexico from the Mountain West. Ah! And then the Mountain West can then finally add BYU, New Mexico State, and any other applicant from the California/Idaho/Utah pool. Problem solved.