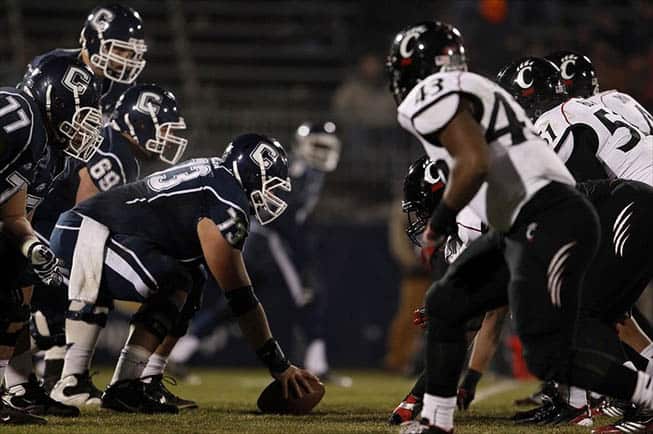 The American Athletic Conference is the new name for the Big East Conference, commissioner Mike Aresco announced this evening.

“American Athletic Conference represents a strong, durable and aspirational name for our reinvented Conference” Aresco said in a release.

“Our name is a nod to tradition, but at the same time makes clear our determination to be a Conference with national impact and appeal. The American Athletic Conference will represent core American values of optimism, energy, growth and innovation. We have a broad geographical footprint that represents unity as well as diversity.”

Instead of using the acronym AAC, the conference will instead use “The American” as its brand. They plan to launch their new website at its new domain on July 1. Logos will also be released at a later date.

For the 2014 football season, The American will have 11 members after the departure of Louisville and Rutgers and addition of three schools: Cincinnati, Connecticut, East Carolina, Houston, Memphis, SMU, Temple, Tulane, Tulsa, UCF, and USF.

Navy joins in 2015 in football only, and at that time The American will split into divisions and have a championship game hosted by the highest-rated division champ.

Would have been nice to have a logo. Struggled with what pic to use, then decided on two teams who will actually be in the conference for the next year or so.

Here is a temporary logo to use until the permanent one comes out.

Just wish they would have the logo and website up very soon so ppl can see it :-)

Hey Kevin, I just gotta say I love this website and check it every day. I see a lot of off-topic stuff in the comments, still about football of course, just not necessairly about the post. Maybe you could try to make a forum.

A forum has been under consideration, just haven’t had the time.

Oh, and also, how do you get a picture?

A picture of what?

One that shows in the comments.

Actually, (Don’t worry, last comment) when are the MWC Schedules coming out?

Everett, I am anxiously awaiting the MWC schedules, as well. What an embarrassment to be the last conference to announce their schedules. The commissioner doesn’t realize that delaying their schedule announcement impacts a lot of people. Travel agencies who put together packages for teams can’t make any plans and honestly, April is VERY late in the year.

Kevin, any reason why it is taking the MWC so long to put together an 8-game conference schedule? This is absolutely baffling.

Lets hope that UC is walked out through that door sooner rather than later. I’m totally shocked at the logical, too perfect and simple to be chosen name choice. Thought for sure they’d mess that one up, but I was wrong. Well done.

Bill,
That should definite be the permanent logo! LOL!!!!

It sounds like a sport’s apparel line, but it could have been worse.

The nickname “The American” is no better than “The Mountain”.

I do think JP that Cincy will leave for ACC and Uconn will follow suit aswell later on down the road.

ACC doesnt seem to want Cinci right now; but after FSU bolts for the Big XII; they will be quick to reconsider.

Is Louisville coming to the ACC?

Yes Louisville is joining the ACC most likely in 2014.

AAC sounds better to me than The American. Good opportunity to stick it to the ever “we’re better than anybody” ACC

I would have preferred just Metropolitan League. The Met for short.