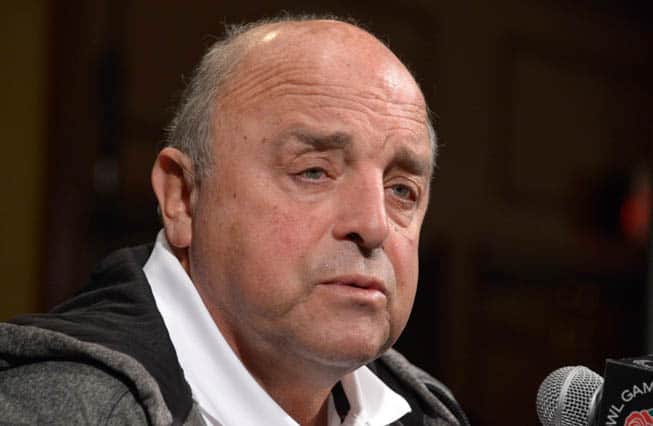 Strength of schedule will be an important factor. (Kirby Lee-USA TODAY Sports)

With over three months left until the 2014 college football season begins and eight months until the first College Football Playoff, scheduling is still at the forefront of the discussion.

Speaking to Adam Rittenberg of ESPN.com, Wisconsin athletic director and playoff selection committee member Barry Alvarez emphasized that strength of schedule will be one of the criteria used to evaluate teams.

“It’s your win-loss record. Did you win a championship? It’s strength of schedule, it’s common opponents. Those are things that will be considered,” Alvarez said.

Alvarez was then asked his opinion on the different scheduling models between the conferences and its effect on strength of schedule. What resulted was a thinly veiled statement to the SEC, which has decided to continue with an 8-game format.

“It’s not my place to decide what they want to do with their scheduling. That’s up to them. We’ve chosen to go to nine [in the Big Ten], strength of schedule is a factor. If you’re not at nine then your nonconference scheduling is important. You take a look at us, we’re playing LSU. I think it will be obvious which schools tried to play up and understand that strength of schedule is important. They do so with nonconference games.”

That means that the SEC and ACC, if they choose to stay with eight games, will need to double up their efforts to “play up” and have a challenging non-conference schedule. And that likely goes beyond the SEC’s mandate that each school must schedule one team from a power conference (ACC, Big 12, Big Ten, Pac 12 plus Notre Dame).

One power conference game at a neutral-site may not be enough, a format that several SEC teams have been using.

Blatant Homerism makes a great point that the 2013 Alabama Crimson Tide, ranked 3rd in the final BCS, may not have been selected to a playoff because their non-conference schedule included a down Virginia Tech (at Atlanta), Colorado State, Georgia State (FBS transitional), and Chattanooga (FCS).

Alabama’s 2014 schedule isn’t much better, with West Virginia (at Atlanta), Florida Atlantic (6-6 in 2013), Southern Miss (1-11 in 2013), and Western Carolina (FCS). Should the Tide stumble once along the way, they could be left out of the playoff under the right scenarios.

And likely before the committee even meets or selects the four teams, there will be endless politicking by media members, coaches (which has begun already), fans, and others. A combination of those factors could leave out a second team from the SEC and force an eventual change to a nine-game format.

The power 5 conferences are not going to be happy until every FCS school is forced to give up football because without the “money games”, the FCS schools will have to a) give up the sport or b) become non-scholarship FCS a la Pioneer League or c) drop to d2 or d3.

At some point the conferences mandating their teams no longer play FCS teams will realize that Kansas, Indiana, Illinois Iowa State, Syracuse and Utah can only play so many OOC games….

Yeah, take a look at Wisconsin. They are playing LSU. They are also playing Western Illinois, Bowling Green and South Florida. The Badgers have played weak non-conference schedules for years.

But that will be changing with B1G going to 9-game conference schedule. And many B1G programs will be forsaking playing FCS programs.

Meanwhile, for the next several years, almost all of the SEC each season will be playing three OOC with programs from non-power conferences. So far the only exceptions are Georgia in 2014 & 2015, South Caro in 2015, and Florida in 2017. Alabama has numerous open slots in their OOC schedule the next few years, so it will be interesting to see how the Tide decides to build their future schedules.

But as the schedules currently exist, the SEC will have a lower SOS than B1G, P12, and the B12. Will see what the ACC decides, but they have already made a step-up by associating with the ND.

Why is it that everyone feels that FBS schools have to play FCS schools in order to keep the FCS programs afloat? That’s hogwash. The FCS schools need to control expenses like D-II and D-III schools do. No one is crying for the D-II and D-III programs. It may come that FCS schools will need to reduce scholarships from 65 to say 40 to save money. That’s life. I don’t believe the quality of Div I FBS football should be desecrated to keep FCS schools playing football. Just my two cents.

It is more than 9 conference games and more than how tough your non-conference games are, it is equality that will make wins and losses mean anything.
In a Super Conference with 14 teams and 2 divisions there will never be anyway to compare all the teams in that Conference. A 9th game does not help you find the Champion in that Conference.
FCS games are a total loss in figuring out the BEST as opposed to the Derserving that the people running the Power 5 and CFP brag about.
The Perfect Playoff Plan 16 has a 10 Team Conference for every team that is equa in status, size and total strength of programsl to the other 11 Conferences that means the Conference Champions are the best 12 of 120. http://ncaa2014.us/theperfectplan.pdf
Then the 2 non-Conference games help separate the second place teams to find the 4 teams that earned a second chance.
http://ncaa2014.us/conferencerealignmentchart.pdf
Alabama would play Auburn, Ole Miss, Tenn, Vandy, LA Tech, Mid TN, Memphis, So Miss & UAB then they could schedule LSU and Florida State. Now that would be the highest RPI and the Best chance to win their way into the 16 Team Playoff.