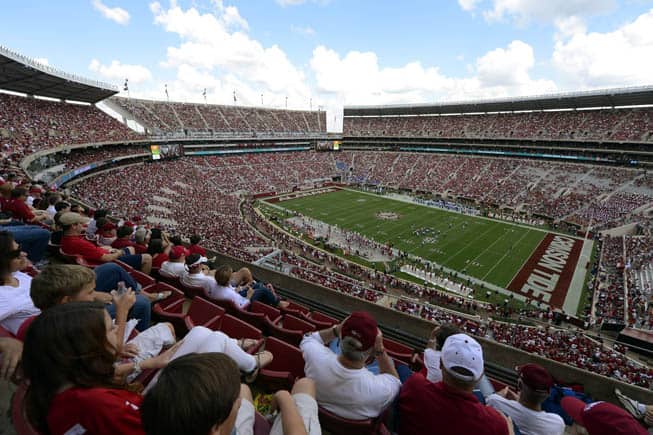 The Alabama Crimson Tide have added the Western Kentucky Hilltoppers to their 2016 football schedule, both schools announced today.

Alabama will host Western Kentucky at Bryant-Denny Stadium in Tuscaloosa on Sept. 10, 2016. Alabama will pay WKU a $1.3 million guarantee for the game, per the Bowling Green Daily News.

WKU is the first announced non-conference opponent for the Alabama Crimson Tide for the 2016 season. Bama is also scheduled to host Colorado State in 2017 and is reportedly in discussions to play Miami (FL) in Atlanta the same season.

Alabama is the third scheduled non-conference opponent for Western Kentucky in 2016. The Hilltoppers are also slated to play at Miami (OH) on Sept. 17 and host Vanderbilt on Sept. 24.

“Obviously, playing Alabama is an opportunity to compete on the highest stage against a truly outstanding program,” WKU Director of Athletics Todd Stewart said. “The five hour drive enables our fans to make the trip to Tuscaloosa and enjoy a terrific college football experience. Our players enjoy the exposure that results from competing at the highest level and many of them have excelled in recent games against strong non-conference opponents.”

Bama needs to complete their 2015 schedule. And any update on the USC-Bama Arlington game for 2016?

I thought Nick Saban and Alabama were just saying that all opponents should be power 5 opponents. Then they schedule Western Kentucky?

Their position is that nobody wants to play them.

Nobody wants to play them… yet they bought out a home-and-home with Michigan State?

What a joke,plenty of teams would play Alabama if they agreed to a home and away.

I agree, everybody wants to play Alabama

It’s how Alabama stays in the hunt every year. Don’t over exert yourself outside the conference. Looking ahead, only Wisconsin is a decent opponent in the next few years. I don’t think you can count WVU this year, but we’ll see.

Everyone is scared of Bama right now ! That is why it is a one and done ! Plus they do need want to lose out on revenue of a home game.

Tough game here folks. Watch out for the Hill Toppers. They beat Kentucky last year. Of course 9 other teams beat Kentucky too. Hell minus well schedule Troy or South Alabama for this year. They would make alot of money if they went on the road to one of those 2 schools. Bama fans travel well and if you keep them in state they wouldn’t have to travel. They have fans all of the state. Some that would love to see them play but don’t have the time or money to go to Tuscaloosa.

Mississippi has beaten the Tide 2 years in a row. Bama is scared to play them boys now!!