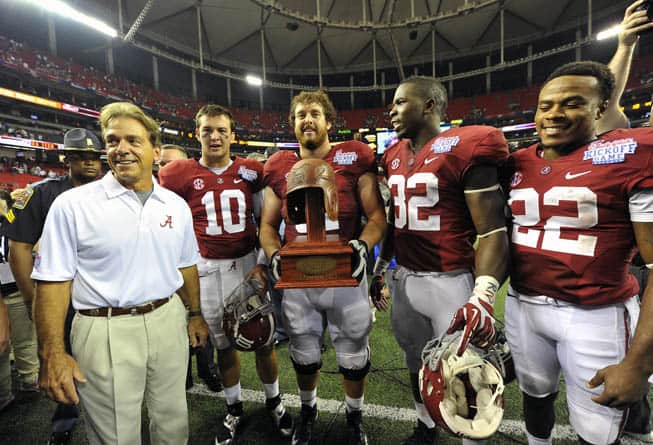 Alabama and West Virginia open the 2014 football season in the second of two Chick-fil-A Kickoff Games in Atlanta, Georgia on Saturday, Aug. 30. The game is set for 3:30pm ET on ABC and ESPN2 (reverse mirror).

West Virginia revealed the time slot in their recap of the Blue-Gold Spring game, which was spotted by AL.com and later CollegeFootballTalk.

The first 2014 Chick-fil-A Kickoff Game features Boise State vs. Ole Miss on Thursday, Aug. 28. That game will kickoff at 8pm ET on ESPN.

Alabama will be making their second consecutive appearance in the Chick-fil-A Kickoff Game and fourth overall. The Crimson Tide ran their record in the game to 3-0 after defeating Virginia Tech 35-10 last season.

West Virginia will be making the first appearance for a Big 12 team in the kickoff game in Atlanta. The Mountaineers are coming off a disappointing 2013 season in which they finished 4-8 overall and 2-7 in the conference.

Next season, the Chick-fil-A Kickoff Game will feature the Auburn Tigers taking on the Louisville Cardinals. Several teams have been rumored for games after 2015, including Florida State, but no official announcements have been made.

Everything tell me that WVU will probably get their butts handed to them but in my 50 years of following the Mountaineers, every time West Virginia has a Snowballs chance to win a game they come through with not only a win but a very lopsided Butt kick’en. Nick is a West Virginia boy and he should know this. I can’t wait to see this game because its the first time since we moved to Florida that I’ve had the opportunity to watch my Mountaineers play. I bleed Blue and Gold so “Goooooo Mountaineers”

alabamaman says, the tide is coming in hard,fast, and continous, so everyone watch in awh

If clay Travis is calling the game. I’m not watching

I am a West Virginia grad, Fan, and lifelong resident and with that said in all likelihood Alabama will win the game, but, it has been my experience with WVU that when the entire world is against them and everyone bets against them, they win. I’ve seen it happen twice to Oklahoma (1982 and 2009 Fiesta Bowl) Clemson in the Orange bowl, and Penn State back when State was a National Power. Several years back they almost pulled off an upset over LSU in Morgantown…. Just saying, in all likelihood but DO NOT EVER BET AGAINST WVU on a sure thing you will always loose.