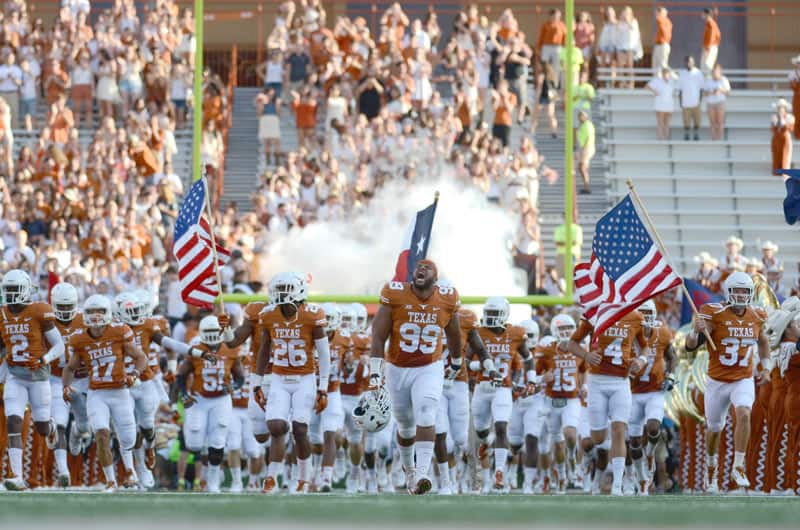 The Alabama Crimson Tide and the Texas Longhorns have scheduled a home-and-home football series for 2022 and 2023, both schools announced on Wednesday.

In the first game of the series, Alabama will travel to face Texas at Darrell K Royal-Texas Memorial Stadium in Austin on Sept. 10, 2022. The Crimson Tide will then host the Longhorns at Bryant-Denny Stadium in Tuscaloosa on Sept. 9, 2023.

“We’re thrilled to be able to add another incredible non-conference opponent with the University of Texas for a home-and-home series,” said Alabama Director of Athletics Greg Byrne. “It’s been nearly 100 years since Alabama has visited Austin and over a century since the Longhorns have traveled to Tuscaloosa, so we’re looking forward to it. This will certainly be a great opportunity for our program and our fans.”

Alabama and Texas last met in the BCS National Championship Game on Jan. 7, 2010. The Crimson Tide defeated the Longhorns 37-21 in that game, but Texas still leads the overall series 7-1-1.

“We are pleased and happy to be able to add an opponent the caliber of the University of Texas to our non-conference schedule,” Alabama head coach Nick Saban said. “The Crimson Tide and Longhorns have played a lot of memorable games over the years and the addition of this home-and-home series will be great for not only our fans, but fans of college football.”

As a result of the Alabama-Texas series being scheduled, the Longhorns had to make several adjustments to their future schedules. Those adjustments are noted below.

Texas was scheduled to host the UCF Knights on Sept. 9, 2023. That game has been canceled.

Texas has also added a home game against the UTEP Miners. UTEP will visit Austin on Sept. 19, 2020.

Looks like both those rumored Alabama series have come to fruition. Good scheduling from them. Unfortunate to see Texas cancelling on UCF though.

Alabama is actually going to play a true out of conference road game. When was the last time that happened?

Has Alabama finalized the game with USC in Dallas for 2020?
Texas has some HEAVY competition coming its way & has done a good job scheduling. Great to see Bama playing some of the traditional schools in college football, even if it was on a neutral site.

As a ticket holder, I am thrilled to see ND & UT come to Tuscaloosa. We need a west coast game also, in my opinion.

Good to see Alabama start to play some home-in-homes in the non conference.

Congratulations to Alabama and Texas AD’s for having the guts to play a home and home non conference series. I do hope this is not only Power 5 Out of Conference game for both teams those years. There is still time.

This is gonna screw UCF big time. I hope it can find a suitable replacement.