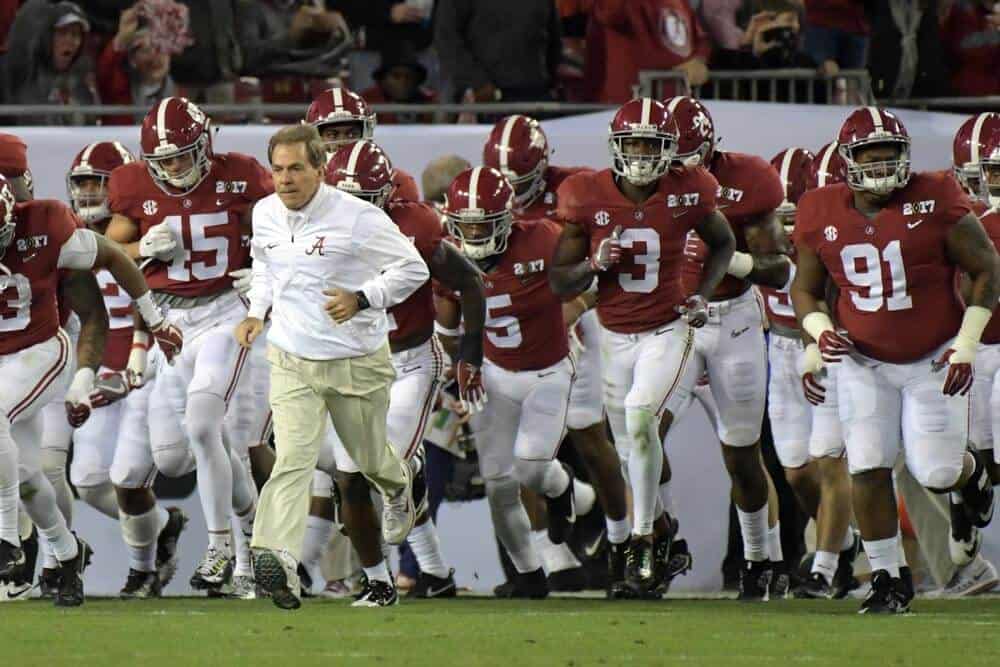 The Alabama Crimson Tide have added the New Mexico State Aggies to their 2019 football schedule, FBSchedules.com has learned.

Alabama will host New Mexico State at Bryant-Denny Stadium in Tuscaloosa on Sept. 7, 2019. The Crimson Tide will pay the Aggies a $1.7 million guarantee for the game, according to a copy of the contract obtained from NMSU via a public records request.

The 2019 meeting will be the first-ever between Alabama and New Mexico State on the gridiron.

Alabama now has three non-conference games lined up for the 2019 season. The Tide open the season vs. Duke in the Chick-fil-A Kickoff Game in Atlanta on Aug. 31 and later hosts Southern Miss on Sept. 21.

Based on previous seasons, it’s likely that Alabama’s fourth and final non-conference opponent will be an FCS school.

According to the SEC scheduling rotation, Alabama’s 2019 conference opponents include Arkansas, LSU, Ole Miss, and Tennessee at home and Auburn, Mississippi State, Texas A&M, and South Carolina on the road.

New Mexico State will play their final season as a member of the Sun Belt Conference in 2017. In 2018, the Aggies begin competing as an FBS Independent.

NMSU now has a total of five games lined up for the 2019 season. In addition to facing Alabama, the Aggies host UL Lafayette (Nov. 16) and UTEP (date TBA) and will travel to Georgia Southern (Oct. 19) and New Mexico (date TBA).

It would be nice to see New Mexico State arrange a similar deal with the Sun Belt, Conference USA or who ever something like Notre Dame has with the ACC.
To guarantee a few games home & away on a rotation basis to help the Aggies fill there schedule once they become Independent again.

This may sound weird, but as a bama fan i would love a home and home with new mexico state. I’ve been to the stadium. I think it would fun.

as a season ticket holder, I would love some home & homes with some good teams. it is all about recruiting. we should schedule some teams out west & some northern teams as well. just my humble opinion.

Yea. I like the neutral sight games are cool, but why not add home and homes to mix it up a bit?