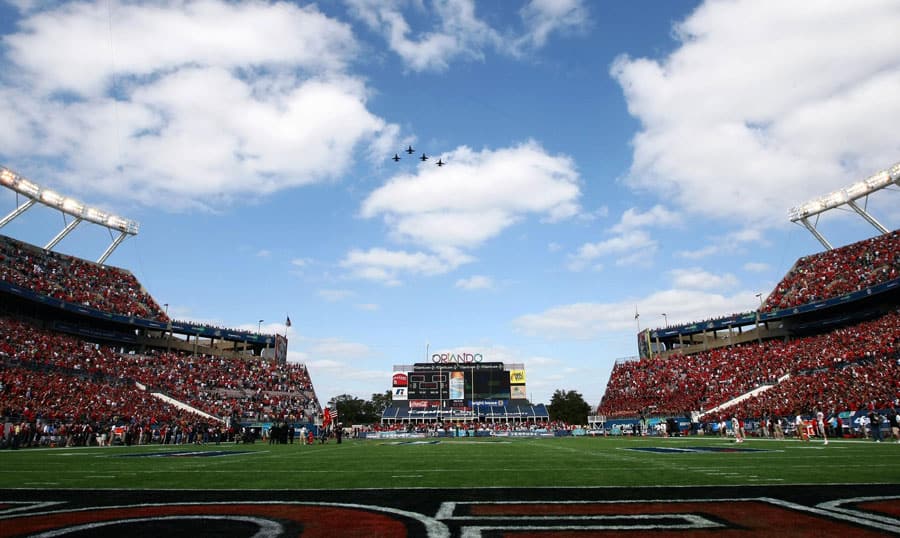 The Alabama Crimson Tide and the Louisville Cardinals will open the 2018 season in Orlando, ESPN has reported.

The matchup is set for Saturday, Sept. 1, 2018 at Orlando Citrus Bowl Stadium in Orlando, Florida.

Alabama and Louisville have met three times on the gridiron and the Tide lead the series 2-1. In their last meeting on Jan. 1, 1991 in the Fiesta Bowl, Louisville won 34-7.

Alabama has played in three straight season-opening kickoff games and recorded victories in each: 41-14 over Michigan in Arlington in 2012, 35-10 over Virginia Tech in Atlanta in 2013, and 33-23 over West Virginia in 2014, also in Atlanta.

The Crimson Tide also have matchups set this season vs. Wisconsin and in 2016 vs. USC, both in Arlington, Texas. Then in 2017, Alabama faces Florida State in the first of two Chick-fil-A games in Atlanta that season.

Louisville jumps into the season-opening neutral-site fiesta in September when they take on Auburn in the Chick-fil-A Kickoff Game in Atlanta. The Cardinals are also set to play Purdue at Lucas Oil Stadium in Indianapolis on Sept. 2, 2017.

Alabama hasn’t played a home-and-home non-conference series against a team from a power conference since facing Penn State in 2010 and 2011. Additionally, the Crimson Tide have no such future series scheduled.

Louisville plays in-state rival Kentucky home-and-home on an ongoing basis. The Cardinals will also see Notre Dame rotate on to their schedule for a series in 2019,  2020, and 2023.

Alabama’s last Home-and-Home series before Penn State in 2010-2011 was in 2002-2003, against Oklahoma. The reason it’s not done anymore is that it’s MUCH more lucrative to have a neutral site game, as well as advantageous to recruiting.

Look at the Alabama schedule page. You’ll see they open with neutral site major P5 opponent each of the next four years

Not ducking (hey you risk everything playing your opener against that major an opponent) and huge payouts to both schools. These are great for us fans. We don’t have to wait for SEC season to Alabama play a real team.

Not ducking? Don’t wanna wait for the SEC season to play a real team? Tell Saban not to chickenshit his way out of home-and-away series vs Power 5 conference teams. I haven’t seen anybody bring up the fact that Alabama was supposed to have a home-and-away with Michigan State and Saban backed out of that because he was allegedly worried about the SEC going to 9 conference games. What a pansy! He’s fast becoming the Bill Snyder of the SEC.

There’s a big difference between Saban & Snyder. Saban is playing for conference & national championships, Snyder is not. A lot of people have brought up the fact that Bama is no longer playing Michigan St & basically it that is old news & does not really matter. Calling Saban is pansy, now that’s funny.

If you knew your facts, you would know that it is Nick Saban that was and is pushing for a 9 game conference schedule. Yeah, he was real worried about Michigan State. How did the last game against them end by the way?

Hey Marlin Dartmann how did you like the game with Michigan St and Wisconsin this year .rflmao We beat the shit out of both little 10 teams. And don’t pull Osux out they are 3-1 against Bama.

How did that last MSU game go against Bama?