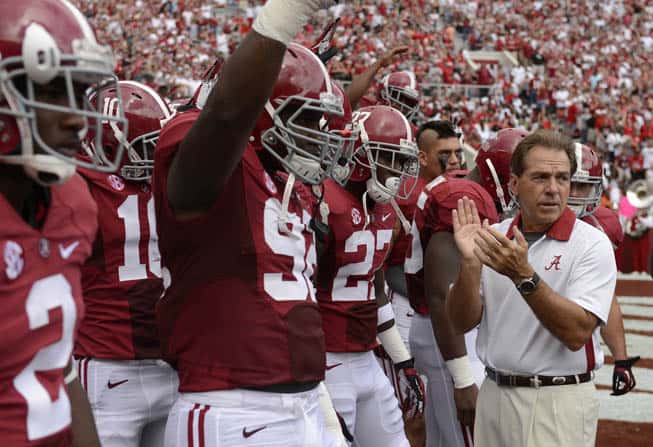 The Alabama Crimson Tide and the Georgia Tech Yellow Jackets have indefinitely postponed their home-and-home football series that was scheduled for 2019 and 2020, AL.com has reported.

Alabama and Georgia Tech initially agreed to play in 2013 and 2014, but the series was later pushed back to 2019 in Tuscaloosa and 2020 in Atlanta.

According to a copy of the revised contract, the breaching party must pay the non-breaching party a $500,000 fee. However, this appears to be a mutual cancellation so a fee will not apply.

The reason for the cancellation is most likely due to the uncertainty over scheduling in the new College Football Playoff era. In addition, the SEC is contemplating moving to a nine-game schedule in the future.

In Georgia Tech’s case, their strength of schedule is already tough, especially in the non-conference. Tech plays in-state rival Georgia each season, and they will also play Notre Dame every few years as part of the Irish’s deal with the ACC.

Georgia Tech also lost a home-and-home series vs. another SEC opponent in May. Citing the “addition of new schools” and the “ever changing schedule,” South Carolina and Georgia Tech mutually agreed to cancel their games planned for 2021 and 2022.

As we discussed and agreed, given the changing landscape of college football and the unpredictability of future conference football scheduling, it seems prudent to postpone the games between our schools to dates that are agreeable to both Georgia Tech and the University of Alabama.

Too bad, might have been an interesting matchup so far ahead in the future. Two quality schools and Alabama cannot be great forever. Right now the matchup doesn’t look that attractive.

keep dumbing down the schedules. Book Troy or La/Monroe/Lafayette or UT Martin or Arkansas St. Don’t give the fans what they want. Give the overpaid coaches another gimme win against a nobody!

You talking to Tech or Alabama? You are never very clear just full of HATE for college football

He was talking to Alabama. Tech doesn’t schedule those schools.

Fans are so funny. They take shots at other schools for strategically scheduling weaker opponents (which is made more funny by the fact that EVERY FBS SCHOOL does it), AND complain when their own school does it (the game will be boring, etc.). But they also complain when their own team schedules tougher opponents (the schedule is TOO HARD!!!), and laugh at other schools that schedule tough opponents non-conference when they lose to them (i.e. Michigan in 2012).

I’m right there with you man, especially the take shots at other schools scheduling weaker opponents, I mean all the big boys do it, and its not going to end because they smaller schools won’t so no to the money (I went to a MAC school and there is usually one “pay game” on the schedule each year). I don’t have a dog in this fight but had to make the comment when I saw someone say Tech doesn’t schedule those schools (whatever smaller schools were listed earlier in the comments) only to go to Tech’s schedule for this season and find them hosting not 1, but 2 FCS schools

Rumors are Alabama is moving to the ACC in 2017. This comes from a source of mine that works in the ACC office.

Don’t think the SEC will let Alabama leave that easy.

Looks like the mushroom are working pretty good for you ACC_insider

Well your source fell, and bumoed his or her head. There is now way in hell Alabama, or any team in the SEC would leave to go to a Baketball Conference. If the SEC does go to a 9 game schedule, than it would make sense to drop Georgia Tech. With this new playoff, all teams are trying to schedule, the best of the best OOC. Georgia Tech would probably hurt Bama’s SOS.

“Any team in the SEC”. Well, maybe Kentucky

If they played this in the Ga Dome, it’d probably get done!