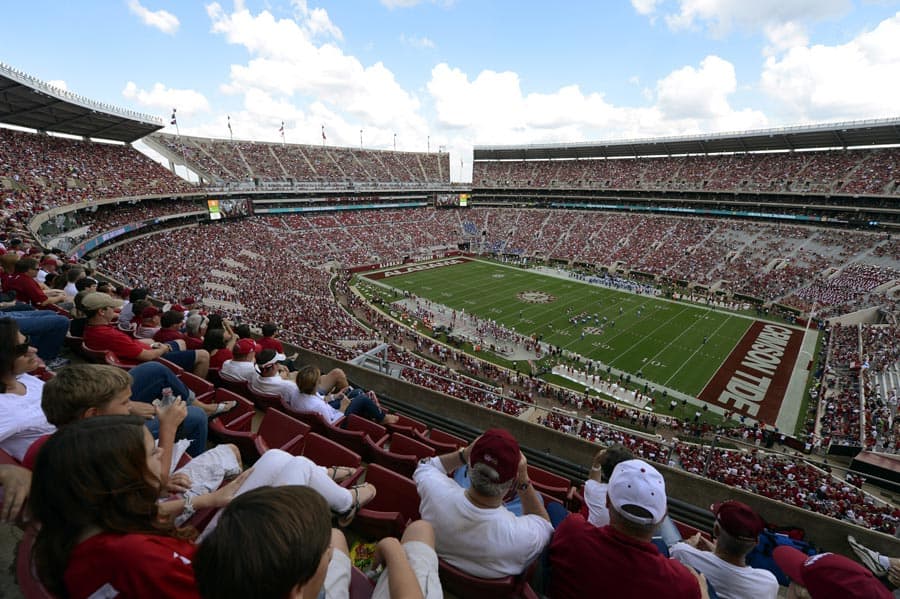 The Alabama Crimson Tide have added the Fresno State Bulldogs to their 2017 football schedule, according to a report by The Fresno Bee.

Alabama will host Fresno State at Bryant-Denny Stadium in Tuscaloosa and will pay the Bulldogs a $1.4 million guarantee, per the report. The game will be the first-ever meeting between the two schools.

The date of the Alabama-Fresno State game is Sept. 9, per ESPN.

The addition of the game against Fresno State gives Alabama three non-conference games for the 2017 season.

On Friday, the Palm Beach Post reported that Alabama and Florida State have an agreement in place to open the 2017 season in Atlanta. That game will likely take place on Saturday, Sept. 2.

The Crimson Tide are also scheduled to host the Colorado State Rams on Sept. 16, 2017. Alabama’s fourth and final non-conference game will most likely be a home contest against either an opponent from the Group of Five conferences or from the FCS.

Fresno State has now tentatively completed their non-conference schedule for the 2017 season. The Bulldogs are slated to open the season at home against Incarnate Word on Sept. 2, visit Washington on Sept. 16, and host BYU on Nov. 4, in addition to the game at Alabama.

Alabama is at it again. It will send $1.4 million to Fresno, Calif. instead of adding in-state Troy (one of three Division I programs from Alabama it refuses to play) and keep the money in the state. Alabama has faced every team in Troy’s Sun Belt Conference at least once, but just can’t seem to find the right date for the Trojans. Pathetic.

So what? Is there some law that a top university has to play every also-ran college in the state? Fresno State is one of the top programs in the MWC. Troy, “pathetically” brings up the rear of the Sun Belt, and overspent with a corrupt criminal’s money. About every decent school in the Sun Belt is now in Conference USA anyway. Troy scruschily couldn’t even keep up with Western Kentucky (an FCS school just a few years ago) and MTSU. Meanwhile, Alabama just scheduled Florida State, and a decent G5 school in Fresno. Even this Auburn grad can cut ‘Bama some slack on 2017 scheduling.

Alabama could give Troy a $1 million guarantee to be the last 2017 home game instead of an FCS school.

Wrong. Alabama needs to reschedule the game with Tulane it cancelled.

This. But it won’t happen. Tulane (and a really bad Tulane team that year indeed) outplayed Bama in ever statistical category other than points on the board (Bama essentially won on a punt return for a TD and a blocked field goal run back to FG range)……and suddenly they didn’t want to play @ Tulane a couple of years later. Bama isn’t satisfied with just playing teams it sees as cupcakes, it wants to cancel out of series with cupcakes that manage to outplay their icing for a single game.

Take in fact that Bama had just beaten a great Clemson team the week before & only held Tulane to two field goals, all those stats did them no good. Bama went 12-2 that year & I don’t think you can base a single game for icing. Also Tulane just bought out the Miss St game so that in tells shows that the Green Wave is doing whats best for themselves, Bama is not the only team that does it.

I heard a rumor from a Bama guy , Bama vs Texas Tech in 2019 in Dallas and Arizona in 2020. Kickoff games…at Cowboy Stadium.

Texas Tech and Arizona schedules are complete for 2019 and 2020. And they’re playing each other in H-H those two years. So are they gonna cancel the H-H, so each can play Alabama one of those years?

Bama thinks so low of Fresno that they’ll schedule them for a sacrificial cakewalk game in 2017…
Way to represent the MWC you jerks.

I assume that Ole Miss, Nebraska, UCLA & BYU feel the same way since they have them on their schedule as well? There’s nothing low about Fresno St.

Fresno State may be questionable for its upcoming 2015 season, but it will rebuild just in time for the Alabama game. For get the “sacrificial cakewalk” rhetoric; who knows who may be sacrificed?