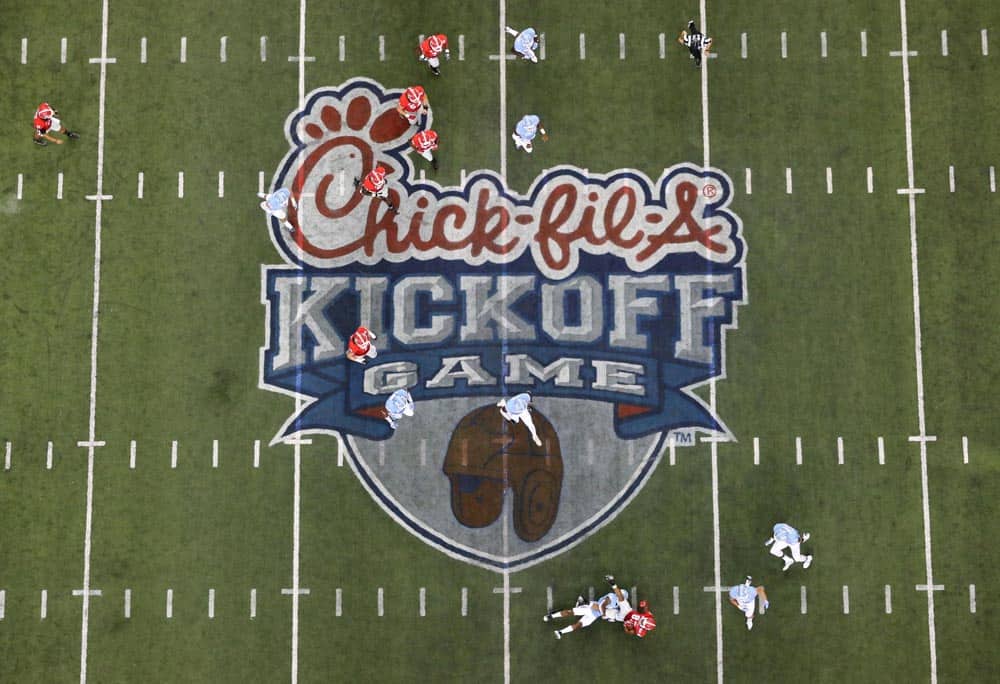 The Alabama Crimson Tide and the Duke Blue Devils will meet in the 2019 Chick-fil-A Kickoff Game, both schools announced on Monday.

The game will be played at Mercedes-Benz Stadium in Atlanta, Georgia on Saturday, Aug. 31, 2019.

“The Chick-fil-A Kickoff Game is an outstanding event and we are excited to open the 2019 season in Atlanta,” said Nick Saban, Alabama head coach. “We have had the opportunity to play in this game on multiple occasions and it is like a bowl game in terms of the competitive venue that’s created. David Cutcliffe has done an excellent job at Duke, and they will be a really good challenge for our team. It’s an honor and a privilege to be a part of this first-class event hosted by the Chick-fil-A Peach Bowl. Playing in this game has provided great exposure for our football program and has been something our fans have enjoyed attending.”

The Duke Blue Devils will be playing in their first Chick-fil-A Kickoff Game.

“For starters, we’re both honored and thrilled to represent Duke University and the Atlantic Coast Conference in this game,” Duke head coach David Cutcliffe said. “This is a tremendous opportunity for our program, and obviously an incredible challenge facing the University of Alabama. The proud history between the two schools is well documented, as Duke and Alabama have an unparalleled common connection with Coach Wade, along with playing in the 1945 Sugar Bowl and Steve Sloan, who played quarterback under Coach Bryant and later served as the head coach here at Duke. We’re certainly appreciative of [Peach Bowl, Inc. president and CEO] Gary Stokan and his team for including us in this event as we know from experience it will be a first class occasion for our players and fans.”

In order to play in the 2019 Chick-fil-A Kickoff Game, the Duke Blue Devils have pushed back a home-and-home series with Tulane to the 2025 and 2026 seasons, according to Steve Wiseman of the Herald Sun. The other non-conference games in 2019 have been pushed back one week with the exception of the Notre Dame game.

Alabama and Duke have met four times on the gridiron. The Crimson Tide lead the series 2-1, but had to vacate their 2006 win over the Blue Devils due to NCAA sanctions.

I love what Cutcliff has been doing at Duke…But in looking at this game in the context of the Alabama OOC schedule, maybe this would be a good time to schedule a second OOC game with a P5 opponent. Maybe, just maybe a home and home series.

Georgia has been regularly scheduling two OOC games with P5 teams, even Florida is set to do so in 2017 and 2019….

About half the ACC usually plays 2 OOC games with P5 teams. With the Big 10, Big 12 and PAC 12 playing 9 game conference schedules almost all of those programs play at least 10 regular season games with P5 opponents.

It is time for all contenders to be playing at least 10 games in the regular season with P5 opponents,

This has to be the worst kickoff match-up I’ve heard of.

+1. Who in the world thinks this is a good idea for either team?

On black & white paper it looks like a weird match up for being neutral site game but Duke benefits big time if they win. Its not the most popular match up it the past but just because it is the worst you ever heard of does not determine the outcome of the game. Example, #8USC vs #1Bama seemed like a great match up, top ten teams, loads of tradition, must see TV, top of their conference.
Bama 52
USC 6
You never know, Duke could be a hand full to play against. Not sure if I am buying what I am saying either, it is a stretch.

Will this game even be able to sell tickets? Unless you are an Alabama fan that lives in the area, I don’t know why you would go out of your way to see this match-up. Being an Ohio State fan, it would be like me driving 3 hours to Indianapolis to see the Buckeye’s take on Iowa State. No thank you. Can’t imagine the limited Duke fanbase would be excited to see their team be embarrassed either.

Anyone have Wake Forest #? Bama vs Duke and GA vs VA – these Kick-off Games may have run their course.

With such large alumni bases for B1G schools in Atlanta, you would think they could get one of them instead of the bottom of the ACC.

I hate to say this but this is somewhat of a let down match-up. I think David Cutcliff has done a great job at Duke & the last four years the Blue Devils are a pretty good team but I feel there will be no excitement over this game unless Duke is in the top 10. We don’t know how both these teams will look in 3 years but if you were to tell me that Bama is playing Duke in college basket ball in 3 years, I would say there is a 20 point lose for Bama. Not sure if Cutcliff or Magic Nick will even be around then but if there are, hopefully it will be a good game.