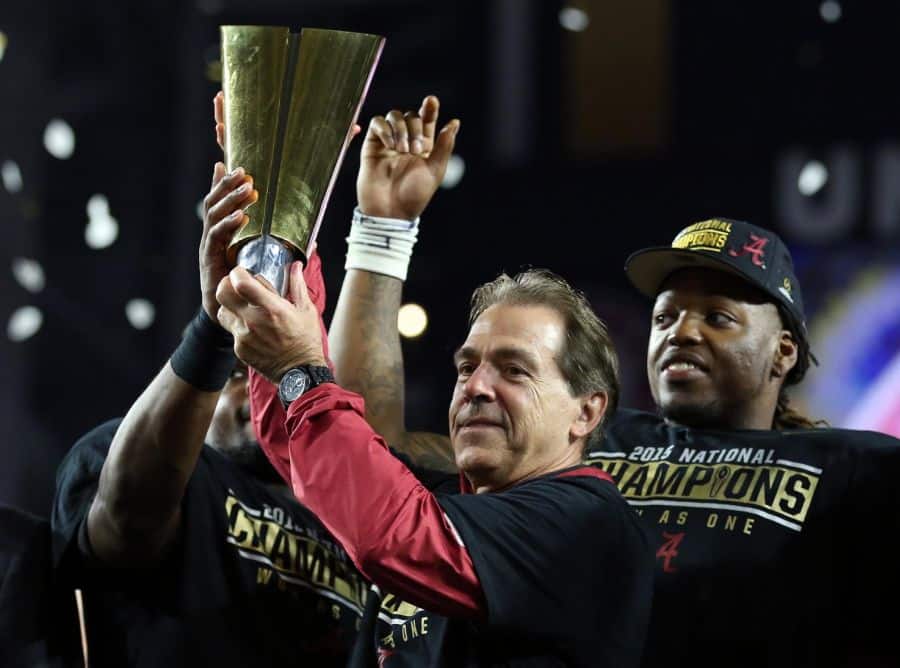 The Alabama Crimson Tide and Clemson Tigers battled back and forth in a College Football Playoff National Championship Game for the ages. Alabama finally held off Clemson, 45-40, at University of Phoenix Stadium in Phoenix, Arizona.

“It was a tough game. You’ve gotta give Clemson’s players a lot of credit. They’ve really got a good team. This was a great challenge for us,” Saban told ESPN’s Tom Rinaldi after the game. “I am so proud of our players, though, the way they competed, especially in the second half.”

Alabama (13-1, 7-1 SEC) secured the victory behind stellar performances from running back Derrick Henry (36 carries, 158 yards, three scores) and the aerial team of quarterback Jake Coker and tight end O.J. Howard. Coker completed 16-of-25 passes for 335 yards and two scores. Both of those scores and 208 of the yards came to Howard, who snagged five passes and proved nearly impossible for Clemson (14-1, 8-0 ACC) to tackle.

“I knew I had a chance to make plays tonight, with the plays we called in practice,” Howard told Rinaldi. “That’s what happened tonight.”

Alabama finished the regular season ranked second in the AP Top 25 and USA Today polls, along with the CFP standings. The Crimson Tide will finish the season ranked first, but Clemson returns a vast majority of the players that participated in Monday night’s game. Just nine of the offensive and defensive players on Clemson’s two-deep are seniors or graduate students.

The defending national champions open their 2016 schedule Saturday, September 3rd against USC. The game will be played at AT&T Stadium in Arlington, Texas, as the latest installment of the AdvoCare Cowboys Classic.

Clemson will kick off their 2016 slate at Auburn on Saturday, September 3rd.

Congrats Bama! Thaks for bringing the trophy back to the SEC! Clemson played an outstanding game & never gave up, the Tigers will be back next year. Bama proved they can hang with a high tempo team & Watson is a great runner & threw all over Bama but is was not enough. Congrats to Magic Nick for his 5th NC, congrats to Jay Coker on getting his after having to seat behind Winston for so long & not working out the 1st season at Bama. The game was amazing, I can actually say now that special teams also win national championships too! Roll Tide!

Alabama, the face of the SEC, well deserved. Onside kick was the call of the season.

For anyone other SEC fan trying to take credit for Alabama’s success, shove it. They’re your opponent, and you’ve gotten destroyed by them for 8 years. Pick up the slack.

Yep. In those 8 years, Alabama has won four SEC titles and the other four were Auburn (twice), Florida, and LSU. And all of them played for the national title, with three winning.

I’d say the slack is picked up.

The SEC is just better. Plain and simple.

Joe,
You’re a clown. There’s a reason they moved to the CFP. If you don’t want to admit that it was because the SEC had a benefit of an extra game, fine. Be delusional.

In 2007, USC should have been in over LSU. In 2008, USC should have been in over Oklahoma and been able to play Florida. Trust me, USC would have annihilated Florida. Oklahoma got in because of the extra championship game. In 2009, Alabama was the CLEAR WINNER. In 2010, Auburn was the clear winner (despite TCU going undefeated too). In 2011, Alabama shouldn’t even have been in the BCS, as they didn’t even win their own division, yet they beat LSU. In 2012, ROLL TIDE dominated. IN 2013, Florida State dominated.

The BCS was a severely flawed system, which favored an extra championship game, highlighted every win as equal no matter if it were power 5 or fcs, and East Coast journalistic bias.

All of this said, 2009, 2010, 2012 are the only years that you highlight which shows the SEC deserved a championship. That is pretty damn good, but it’s not just better. Throw that SEC cheering away. The only chant that matters in the SEC is Roll Tide.

Look, it’s real simple. When you play the SEC you can’t beat them.

The SEC was 9-2 this year in bowl games and claimed their 8th National Title in the last ten years. In that span Alabama, LSU, Florida, and Auburn have represented the conference in the title game. It’s ridiculous fan-boy talk to say it should have been USC playing instead of LSU or whatever. That’s dumb. The fact is when the games were played, the SEC won.

The SEC was clearly deserving of every title it won. To say otherwise points out your ignorance.

And you call me a clown?

At least your mom likes me.

Joe, you have to feel sorry for Maverick.
He is a SEC jock sniffer that never does brag on his conference. So, what is the only thing that he can say about us, we have an terrible OOC schedule.

Bragging on your conference is like bragging your girlfriend’s getting banged, but not by you… It’s pointless and very embarrassing.

Leave your mother out of this, Mav.

Will do. Right after I get off your’s.

And all this time I thought she liked men. Go figure.