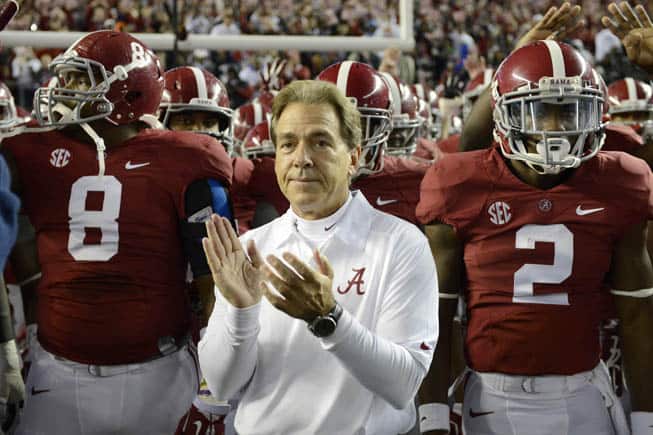 The Alabama Crimson Tide have finalized their 2014 football schedule with the addition of Southern Miss, the school announced today.

Alabama will host the Southern Miss Golden Eagles at Bryant-Denny Stadium in Tuscaloosa on Sept. 13, 2014. The two schools have met 42 times, but not since a 30-21 Alabama win in 2005 that was ultimately vacated. Officially, Bama leads the overall series 33-6-2.

The Crimson Tide open the 2014 season in the second game of the Chick-fil-A Kickoff Game in Atlanta against West Virginia on Saturday, Aug. 30. Boise State takes on Ole Miss in the first game on Thursday evening.

Alabama then hosts Florida Atlantic on Sept. 6 before facing Southern Miss. Bama’s final non-conference game of the 2014 season is at home vs. Western Carolina on Nov. 22.

Alabama’s two open dates in 2014 are again well placed. The Tide will enjoy their off week prior to an Oct. 4 trip to Ole Miss and before their visit to LSU on Nov. 8.

Nah, they had the barn scheduled…

Southern Miss is down right now but they are usually a solid program. They went into Bama within the past 10 years and beat them 21-0.

they won’t be solid next year and with their 23 game losing streak ongoing and their empty stadium they need the money. Alabama just picked another cupcake and Southern Miss a nice paycheck. The rich get richer and the poor beggars get some nice crumbs fro taking a brutal beating..

bama picks the 3 worst teams possible to play after their neutral site games.

To be the best, you have to beat the best, and Bama hasn’t done that recently.

3 out of the last 4 years they won the title and …Oh, yeah!….were the best in the best Conference in the country !!!

Alabama did not beat the best for their titles. Texas lost their QB early and had no chance, LSU rematch game was a joke and Notre Dame should have gone about 7-5 last season with all their lucky wins and great ref calls during the year. Playoffs will help get better matchups in title games. A lot of year it is a very good team and a team that really should not be in the game at all.

@Brian and @Evan
How can Alabama help the fact that Colt McCoy got injured? Yes maybe Texas could have won that game if he didn’t but there really isn’t anyway of knowing that now is there? Also how is it Alabama’s fault that the voters deiced to rematch LSU and Alabama? The fact is LSU was clearly one of the best in the country that year and they proved that by beating Alabama 9-6 in overtime then Alabama goes down to the Superdome and totally destroys them 21-0. How can Alabama help the fact that Notre Dame went 12-0 and ended up in Miami to face them in the National Championship? Do you not consider Texas A&M a quality opponent? What about LSU are they not a quality opponent? or even Auburn heck Auburn is 10-1 this year and ranked 6th in the country how the heck is that not quality? Last year they opened the season in Dallas with Michigan how is it Alabama’s fault that Michigan didn’t win out the rest of the Season? In 2010 Penn State was ranked 18th in the country when Alabama played them Arkansas was ranked 10th Florida was ranked 7th South Carolina was 19th LSU was 10th Mississippi State was 17th Auburn (the national champions that year) was 2nd and Michigan State was 7th there were clearly plenty of top opponents that season. in 2011 Penn State was ranked 23rd at the time Alabama played them Arkansas 14th Florida was 12th LSU was the top ranked team in the nation when Alabama played them both times! in 2012 Michigan was 8th Mississippi State was 13th LSU was 5th Texas A&M was 15th Georgia was 3rd. So its pretty clear that Alabama plays plenty of good or even great teams it is not Alabama’s fault when Mississippi State, Mississippi, Arkansas, and Tennessee don’t have a good year all them are permanent opponents and that will never change every year its pretty stupid to say other wise when the evidence is clearly there to say other wise.

Texas fans appear to be the whiniest in college football. All I ever read is Texas fans whining about that game. Blah blah blah.

I hate playing no name games but it could be worse, they could be in the Pac12 or Big10

yes, then they would 5-7 for the season. Last 3 games vs pac12 teams 0-3. Just ask UCLA or Utah! Alabama plays maybe 3 tough games a year And rarely goes out of the confederacy.

Nick, no, they would just get the same drivel they get now. They would beat holes in the eye sockets out of all that crap, and you taters will start whining that they “aren’t playing anybody”. Some of these brain dead commenters talked about Oregon, Baylor, Texas A&M, and they all got snot slapped today. So, tomorrow, you will find another group of dusties and say that we’re afraid of that trash.

It’s endless. It’s like this DYNASTY. No end in sight!!!

Exactly. I would love to see how Alabama would hold up playing at Oregon, Stanford, Arizona State, USC, UCLA. SEC was once a very good conference but you look at it the last couple of years and it is just not good.

Guess Bama can’t play everyone. But lets please talk about how Bama is always on these fine folks’s minds. Makes me salivate.

I believe Bama chickened out of a home and home with Michigan Sate…..

Michigan State? That team team we kicked out of the CapOne Bowl by 30 something points? THAT Michigan State? You weirdos are cracking me up! What are you dweebs smoking? Elephant dung?

It honestly doesn’t matter who they play. Alabama will put any team in their place. They are literally the best college football program in the country.

What Nick said. So true. The end of earth will come before bama gets the guts to travel to the West coast for a regular season non-conference game.

What would you say to a west coast team travelling to Bama? Got problems with that? I bet you do!

It doesn’t matter anyway the best teams will play each other eventually During this season are at the end of the season Bama haters are the reason why Bama has to play twice as hard so keep on flaping your gums.

Bill M you’re so full of it… Where have the last 4 National Championships of the NCAA come from Bro WAKE UP!!!

If the SEC conference is lacking then why would Mizzu and A&M jumped in. The SEC is still the dominating conference!!

Although Bama will be heavily favored, the opener with WVU could be a decent game. Their much maligned defense will be coming back after 2 years of experience in the Big 12. Ruschel Schell, the Pitt transfer who broke all yardage records in PA high school football, will be making his debut at RB. QB Clint Trickett, the FSU transfer, will healthy for the first game and the JUCO QB transfer, Skyler Howard, could be a surprise. Regardless of the outcome, Nick Saban can enjoy visiting family and friend from back home in WV. lol

I think bama is the best college team there is around. they have been to the championship games for the past 2-3 years. ROLL TIDE