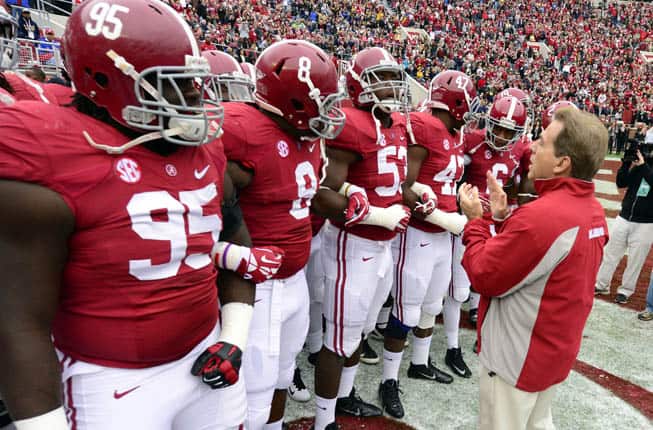 The Alabama Crimson Tide have added the ULM Warhawks to their 2015 football schedule, TideSports.com has reported.

Alabama will host ULM at Bryant-Denny Stadium in Tuscaloosa on Sept. 26, 2015. The game will be the 3rd meeting between the two schools, although the first game in 2006 was vacated by the Tide.

In the second meeting in 2007, ULM upset the Crimson Tide 21-14 in Nick Saban’s first season in Tuscaloosa.

The Crimson Tide are scheduled to open the 2015 season against Wisconsin at AT&T Stadium in Arlington, Texas on Sept. 5. Alabama is also slated to host Colorado State in 2015 or 2017.

ULM continues their trend of facing tough non-conference opponents. The Warhawks are also scheduled to visit the Georgia Bulldogs on Nov. 7, 2015. In 2016, ULM opens the season at Oklahoma.

This season, ULM is set to play at LSU, Kentucky, and Texas A&M and host Wake Forest at Malone Stadium in Monroe.

Another home cupcake game for Alabama. Why won’t they ever do a home and home with a good PAC 12 team like Oregon? Keep the fresh patsies a comin!

an FCS team and a new Sun Belt team…….Pot meet Kettle, his name is Ron.
Before you say anything back Ron I am an Auburn fan. I hate the turds(tide) with every fiber in my body but you need to look at other schedules before you type.

I just hope in the future when the Power 5 breakaway that there is a way to take the schedules out of the hands of the individual schools because this is getting ridiculous. When the Power 5 schedule more OOC games against FCS teams than against each other, they are just buying their bowl entries.

ULM is not FCS, they are in the Sun Belt Conference.

At least Oregon has home & home (yes Alabama that means being away Tuscaloosa) over the next 8 years with Michigan State, Nebraska, Ohio State and Texas A & M. When Alabama, really goes on the road then I will take back what I said. Atlanta and Dallas are not road games.

Wisconsin and Colorado State are not decent?

Lets hope it considers conference too so when you play Auburn, LSU, Alabama, Georgia, Missouri, etc. you get credit….beats the hell out of Iowa State, Kansas, WVU, TCU, Texas Tech and of recent Texas

Here’s the problem – Alabama doesn’t play Georgia or Missouri or South Carolina very often. Sure, they play LSU and Texas A&M every year, but they avoid most of the good teams in the East Division. The Tide’s permanent cross over is Tennessee – who has been down for a decade now. Look at the past 4 years and this season:

2010: Actually they did play Florida and South Carolina. Had San Jose St. and Georgia State AT HOME.

2013
No Georgia, South Carolina, Florida, or Missouri. Georgia State and Chattanooga AT HOME.

Replace two of the FCS and Sun Belt games each year with Georgia/South Carolina/Missouri and an ACC opponent. Unfortunately, it would also likely mean an extra loss every year.

@Bradleysmith1212
You forgot to mention several of Alabama’s out of conference games in your schedule analysis.

– Alabama played a home-and-home with Penn State in 2010 & 2011 (this was prior to the scandal which knocked PSU back a few steps; they were a top 25 team in both games).

– In 2012, Alabama opened the season in Dallas against Michigan, who was ranked 8th and coming off a Sugar Bowl win

– In 2013, Alabama opened the season against Virginia Tech, a perennial top 25 team

– In 2014, Alabama opens in Atlanta against West Virginia, who finished 10-3 with an Orange Bowl win in 2011, when the game was scheduled

– In 2015, Alabama will open against Wisconsin in Dallas

Sure, Alabama hasn’t opened against a team like Ohio State or Oregon in recent years, but when was the last time you saw one of them open against a top-ten team?

Wake up people. ULM coach Todd Berry is a voting panel member who will decide on the new 10 second saban/beliema rule. This was a bought vote.

Saban likened that ULM loss to Pearl Harbor. Even to Bama fans, it should not have been THAT catastrophic.

Maybe not. The proposal was tabled.

Jealousy is one heck of a motivator, isn’t it?!?