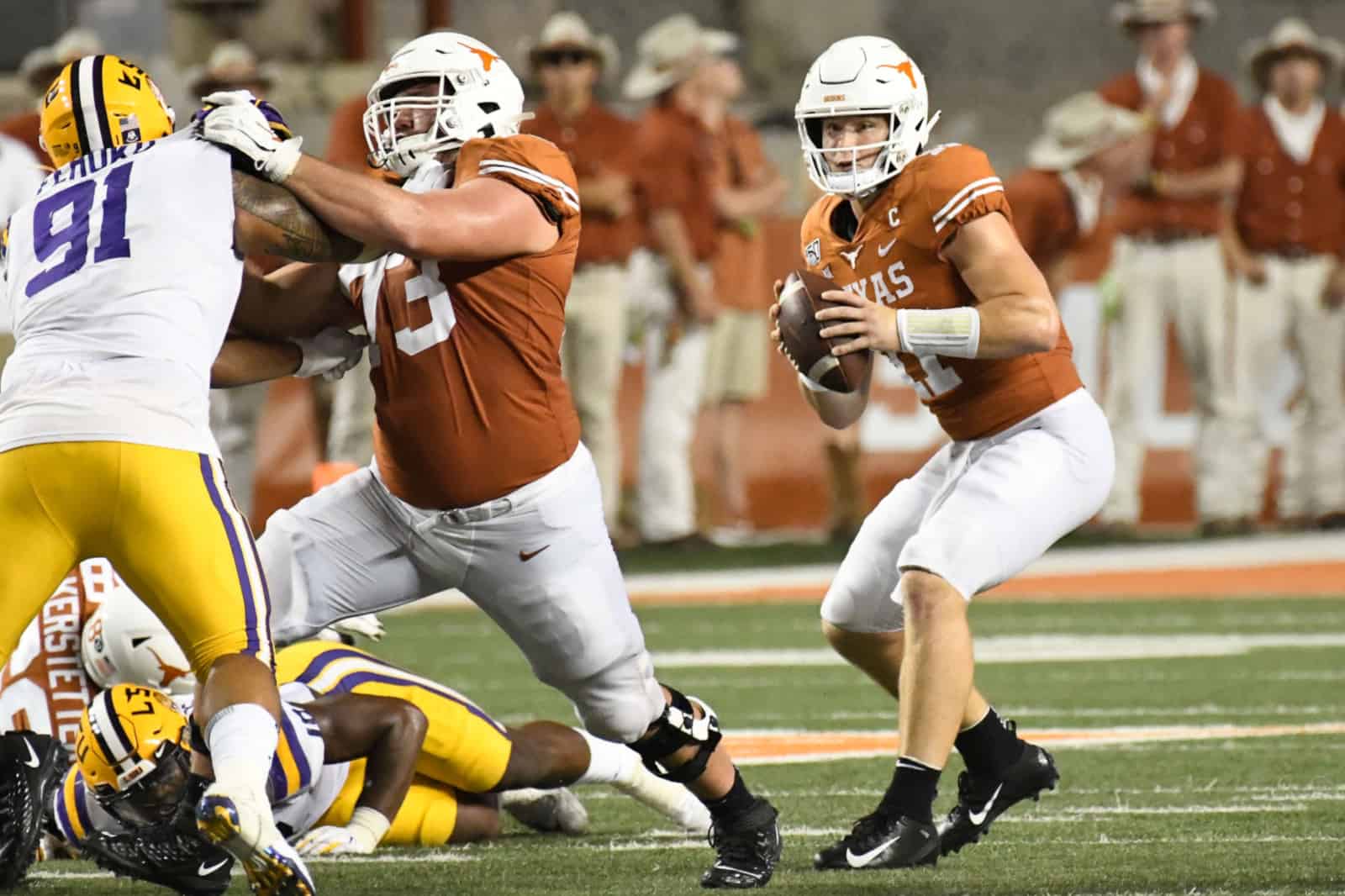 As you begin your forced march into the desolate terrain of basketball and then baseball season, tuck away this token of hope – the kickoff of the 2020 college football season is a mere 234 days away.

It’s just long enough for us to all be skinny and for all our teams to seem like they’re ready to be next season’s version of the 2019 LSU Tigers.

One of only a few Power vs. Power matchups featuring contenders in Week 1, this game is also the head coaching debut for Washington’s Jimmy Lake. It also looks like a must-win for Michigan’s Jim Harbaugh, who will have to continue to prove that he can drive the team bus to the CFP bracket.

USC vs. ALABAMA (in Arlington, Texas)

After opening the past two seasons with games vs. Louisville and Duke, Alabama’s attempt to climb back into the CFP bracket will begin with a clash with the athletic Trojans. While USC certainly doesn’t look like Clemson or Ohio State on paper, it did finish 2019 ranked No. 6 in passing yards per game. That’s more potent than any other offense the Tide faced last season apart from LSU – and we all know how that worked out. While not many folks will expect Trojan head coach Clay Helton to win this one, if he does, he will extend his shelf life at USC.

This is a rematch of last season’s game in Austin, a 45-38 Tiger win. Tune in to this one to see if the Longhorns really are back – again – and what LSU looks like minus Joe Burrow.

After opting out of playing a Power opponent outside of Big Ten play last season, Ohio State will hit the road to play a team that finished 2019 ranked No. 6 in the final CFP Top 25 and which bested (8) Wisconsin in the Rose Bowl.

A rematch of the 2014/15 CFP National Championship (a 42-20 win for Ohio State) and the 2009/10 and 1957/58 Rose Bowls (both Buckeyes’ wins), these two have met nine times previously with Ohio State winning on each occasion. The Bucks and Ducks will complete their home-and-home series next September in Columbus.

This should be a solid matchup between an up-and-coming team from the ACC Coastal Division and a talented program trying to stay in contention in the ever-changing, ever-tough SEC West. On one side, it’s Mack Brown trying to end his career on a high note, and on the other, it’s Gus Malzahn trying to stay off the hot seat.

A rematch of the 2001 Peach Bowl, a 16-10 win for the Tar Heels, North Carolina and Auburn have met six times previously. The Tar Heels won the first three meetings, played from 1892-1901, and the Tigers picked up wins in the only-other regular season action – a home-and-home series in 1987-88. The two programs don’t have any future dates booked.

While perhaps not as compelling as other matchups on offer, this game will be key for two head coaches (who both posted 6-6 records in regular season play in 2019) in their quest to prove they’re still the right guy for the job.

The Hurricanes and Spartans haven’t met in 31 years, or since 1989 – also the only previous meeting in East Lansing. Miami has never lost to Michigan State (4-0 all-time), but the total margin of victory in the last three games is a mere 14 points. The two are slated to complete their home-and-home series next season when they meet on Sept. 18 in Miami Gardens.

The Badgers and Irish haven’t squared off on the gridiron since 1964, when unranked Notre Dame opened the season with a 31-7 win in Madison. That kicked off a nine-game winning streak that ended with a disappointing 20-17 loss at USC. The Irish ultimately finished 9-1 and ranked No. 3 in the AP under then first-year head coach Ara Parseghian.

The two schools have played each other 16 times previously and met consecutively from 1942-44 and 1962-64. Notre Dame holds an 8-6-2 advantage, but Wisconsin has won two of the last three. The Irish and Badgers are scheduled to meet again next season in Chicago.

Not only does this under-the-radar matchup feature two programs which combined lay claim to 33 national titles,  it’s Princeton’s first meeting with an FBS program in 34 years.  Far from an easy date for Army, the Tigers have posted an 18-2 record over the last two seasons, including capturing the 2018 Ivy League title.

Army and Princeton have met 13 times previously but not since 1982. The Tigers lead 6-4-3 but the Black Knights have won three-straight. The two schools don’t have any future dates booked.

A rematch of the 2018 Cotton Bowl (a 30-3 win for Clemson), these two have only played once in the regular season since Notre Dame kind-of-sort-of joined the ACC (via agreeing to schedule five of the league’s members each season) in 2013. That contest was played in 2015 at Clemson, a narrow 24-22 win for the Tigers.

Army and Princeton have combined for 33 national titles? Whoa

Most of them were in fencing.

Notre Dame will have a weather advantage very likely

Now for Ohio State to schedule a home game with Clemson on November 21, 2026 for similar reasons, hopefully that game would be at night (which means the Big Ten will have to start playing night games all season like the other Power 5 conferences, UM-OSU really needs to be at night).

Army will be a pissed off squad next year,they can’t hapy the way they finished up. And Princeton will be quite eager to take a shot at the Black Knights,this is the game I want to see.

What about a first-ever meeting between Penn St. and Virginia Tech in Blacksburg?

I am looking forward to that game, but I have connections to both programs.

There is only one Top 10 matchup on the whole schedule. Oregon vs Ohio State will probably both be ranked in the Top 10 nationally going into that game.

Wisconsin and Notre Dame although finishing 2019 season at #11 and #12 have a good change to be in the Top 10 although both have to beat a end of year ranked team first in Michigan and Navy.

Miami, FL, USC, Texas, and Washington have not played to their “Brand” the last few years. North Carolina does not have a great Brand and was happy to be 6-6 last year.