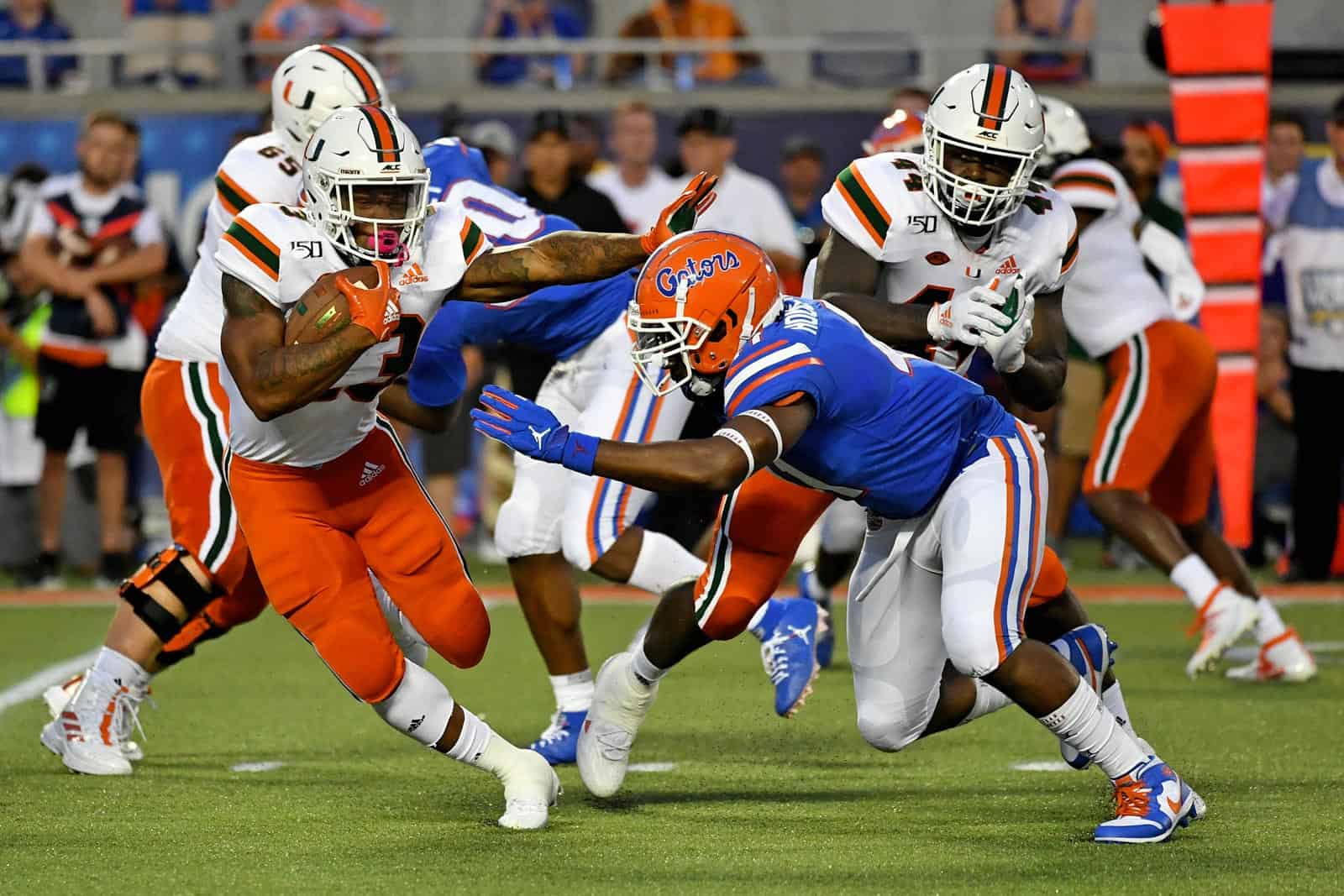 Once played annually, the following matchups are now only featured intermittently, leaving their trophies to gather dust until a future date. Whether it was conference realignment or scheduling complications that compromised the rivalry, each was once, and therefore is still, worthy of a travelling prize.

Houston and Rice’s campuses are located a mere five miles apart in Houston, Texas – also known as the Bayou City. The first game between the two, in 1971, was also Houston’s first-ever league game as a member of the Southwest Conference. The 1995 contest was the final SWC game in history. First awarded in 1974, the trophy itself is a gold bucket attached to a large wooden base. Houston has captured the Bucket 28 times vs. Rice’s 10. Though they were slated to open the 2020 season together – a game that never happened due to the pandemic – the Cougars and Owls haven’t met on the gridiron since 2018.

West Virginia and Virginia Tech shared membership in the Southern Conference (1950-64) and the Big East (1991-2003) making 23 of their 52 meetings in-conference games. Though the series dates to 1912, the Black Diamond Trophy wasn’t introduced until 1997, seven seasons before the Hokies left the Big East for the ACC. The schools are located 250 miles apart in coal country, hence the prize’s name. They played consecutively from 1973-2005 but have only met once since, in 2017. West Virginia leads the all-time series 28-23-1 but Virginia Tech has won three straight and has captured the Black Diamond seven times vs. the Mountaineers’ three.

Awarded to the winner of the three-way battle between Florida/Florida State and Miami Fla., the Florida Cup (also known as the “state championship of Florida”) was established in 2002 by the Florida Sports Foundation. Though the Cup is 19-years old, it’s only been presented six times – from 2002-04 and in 2008, 2013 and 2019. While Florida State meets Florida (a non-conference fixture) and Miami (as permanent ACC cross-division rivals) annually, the three-way rivalry has been hampered by the limited number of times the Gators have squared off with the Hurricanes. Miami won the first three Cups (2002-04) while Florida (2008 and 2019) and Florida State (2013) have captured the three most recent.

After what will be a 14-year hiatus, the 2025 playing of the Border War will renew one of the longest-running rivalries in college football. Kansas and Missouri first played for a War Drum in 1937, a tradition that was paused for WWII and then renewed in 1947 until it was misplaced (and replaced) some 40 years later. The current version of the trophy – which is a bass drum – was introduced in 1999. Starting in 2007, the winner was also awarded the Lamar Hunt Trophy (also the name of the NFL’s AFC Championship trophy), in honor of the Kansas City Chief’s former owner’s attempts to have the rivalry game played at his Arrowhead Stadium. Missouri leads the all-time series 57-54-9 and has won three-straight. The two haven’t clashed since 2011, the Tigers’ final season in the Big 12 before bolting for the SEC.

The Irish and Spartans met consecutively from 1959-94 and 1997-2013 but have only played twice since, a home-and-home series in 2016/17. The Megaphone Trophy debuted in 1949, courtesy of the Detroit based alumni clubs of both schools. As advertised, the award is a megaphone, with a red stripe painted down the middle listing the years the two have met. Each team’s contribution to the score is painted on their side of the prize. Notre Dame leads the all-time series 47-29-1 and has won the Megaphone 35 times vs. Michigan State’s 27.

The prize awarded to the winner of the “River City Rivalry,” Cincinnati and Pitt first battled for the Paddlewheel in 2005. Both the trophy and game pay homage to the shared connection as major cities on the Ohio river. Though the two met four times from 1921-81, the trophy didn’t enter the picture until Cincinnati signed on with the Big East. The duo clashed eight consecutive times as conference foes, each squad taking home the Paddlewheel four times. The active rivalry ended in 2013 when the Panthers joined the ACC and the Bearcats migrated to the American. The trophy itself – a functional ship’s telegraph that lights up with the annual winner’s logo – is a whopper, standing four feet tall and weighing in at almost 100 pounds. Pitt leads the all-time series 8-4 but Cincinnati has won two-straight and four of the last five. The two haven’t met since 2012.

After a six-year hiatus, Notre Dame and Purdue will renew their battle for the Shillelagh Trophy in 2021. Not to be confused with the Jeweled Shillelagh (presented to the winner of Notre Dame-USC), the Shillelagh Trophy is a blackthorn oak club “donated by merchant seaman and Fighting Irish fan Joe McLaughlin” who purchased it during a trip to Ireland. First introduced in 1957, the winner and score of each game is recorded on separate medallions placed on the oak stand that holds the Shillelagh. The Irish and Boilermakers battled for the traveling prize every year from 1957 until 2014, when Notre Dame partially joined the ACC. The Irish have won the Shillelagh 39 times (including capturing the last seven straight) vs. Purdue’s 19. There was also a third Shillelagh associated with a Notre Dame rivalry – this time with Northwestern. It is now the property of an Omaha, Nebraska businessman.

The Kansas-MIzzou games should in fact be played at Arrowhead rather than on-campus as is planned.

Thanks. Many of these rivalries should be played on some type of semi-regular basis.

Notre Dame sure is full of shillelagh! :)
.
Nice article! Reminds me that the SEC doesn’t have enough fun trophies. Lots of forgotten traditions though. I know Auburn not having the annual Wreck (Georgia) Tech game loses the history of greasing the train rails causing Tech to overshoot the station. The Georgia game usually goes by The Deep South’s Oldest Rivalry, but at Auburn it was the Burn the Bulldogs. There’d be a parade and they’d Burn it all in a bonfire at the end. Something about a fire at a game in Columbus GA way back when.

Those trophy sales reps need to get busy. Every college game needs a rivalry trophy! What do we call the Southern Miss – Alabama rivalry?

Stating the obvious one: Texas -Texas A&M (once branded as the Lone Star Showdown) played 118 times until 2011, and none since. No plans for the future, either.