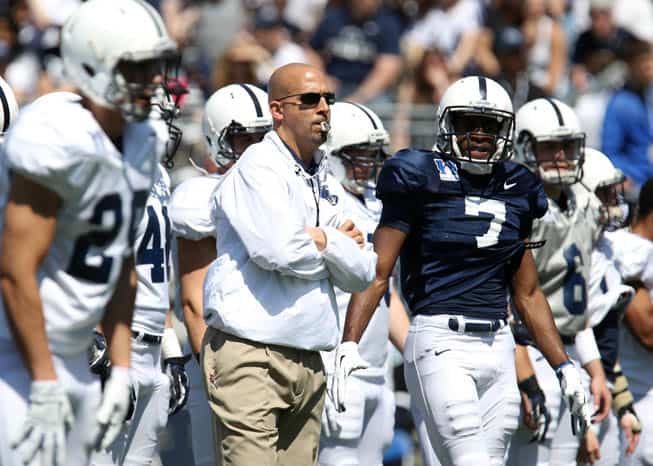 The team here at FBSchedules.com has started gearing up for the 2014 college football season by looking at some of the more embarrassing non-conference schedules in the nation. We’ve examined the SEC, and the rest of the field doesn’t compete with the lackluster non-conference scheduling habits of the folks in the South.

Every conference has their blemishes in the non-conference scheduling department. Some just need a little cover up, while others need Botox to repair the carnage.

Here’s a look at the five weakest non-conference schedules in the Big Ten.

OH! UCF! What an exciting game!

Maybe last year. The Golden Knights from Orlando just lost their starting backfield to the NFL, and I don’t care what program you are, that makes you suspect to having a few hiccups in your first game of the season … against a big time program … in Ireland … in a nationally televised morning game.

Temple, UMass and Akron won a total of of eight games last year combined. That should speak for itself. In the grand scheme of things, we can’t blame Penn State for scheduling UCF in Dublin — it’s a great idea. The timing just worked out for them that UCF won’t be nearly as good as they were last year and that lands them in the number one spot on the wrong list.

Pick a direction! Neither school from Michigan on this slate was impressive last year, which could’ve helped Purdue’s case if they were both average like they have been in the past. Central Michigan, while they may have the coolest mascot in college football, only won six games in a pretty weak MAC last year. Not to be outdone, Western Michigan won a single game in the same aforementioned weak conference.

Playing Notre Dame in Indianapolis adds some difficulty, but Purdue doesn’t have a true road game on their non-conference schedule and that’s not good for any resume. So close to first, Purdue. So close!

Times are a changin’ in the NCAA. Ball State is the best team that Iowa has scheduled in the non-conference this year, and they didn’t even win the MAC last year. Iowa State is another bottom-tier BCS team that could be relegated if the Big 12 decided they were the EPL.

The Hawkeyes saving grace is a mediocre Pittsburgh team that is replacing a quarterback, and Heinz Field isn’t exactly the toughest place to play a college football game in the nation. Iowa was probably hoping Iowa State was going to improve a little when the scheduled this contest, and let’s face it, the fans in Ames thought they would be. For the time being, Iowa lands at three.

Illinois was in a dog-fight with Iowa for the fourth spot on this list, and the Illini won out. Props to Illinois for traveling to Seattle to play Washington in Husky Stadium. That’s the best true road game on this list as far as venue goes. Washington was also a nine-win team last year, including a bowl win against BYU.

Couple that venue with a visit from a pretty solid Western Kentucky team, then you’ve got a decent out of conference slate that just edges out Iowa.

Michigan and cross-state rival Michigan State were neck-and-neck for the last spot on the list, but Michigan State’s scheduling of the Oregon Ducks was just too much to ignore. Appalachian State probably scares Michigan fans the most due to past experiences.

Outside of revenge against the Mountaineers, and the typical battle against Notre Dame, the Wolverines shouldn’t be challenged. Miami of Ohio had a whopping total of zero wins last year, and Utah underwhelmed in the Pac-12. Notre Dame is the only thing keeping the Wolverines from climbing higher in these rankings.

Every time I see an article like this..I always look at in conference patsies like Indiana Minnesotaand iIllinois

Love the write up of Michigan’s OOC schedule. “Appalachian State probably scares Michigan fans the most due to past experiences. Outside of revenge against the Mountaineers, and the typical battle against Notre Dame, the Wolverines shouldn’t be challenged.” Uh…Utah also won last time they played in Ann Arbor, and it was more recently that Appalachian State.

Bush league analysis. Don;t understand including Michigan as they have two Power Five conference programs on their OOC schedule. Rather you should consider including in your bottom five list some other B1G programs:

Wouldn’t call it bush league. Michigan’s schedule and the 3 you listed are all very close. Rankings are always subjective.

Ricky must be a SEC fan….they wouldn’t know a legitimate OOC schedule if it up and shook their hand(except for Auburn). Minnesota is playing a rugged schedule that will see them being challenged in three of the four games. Rutgers is playing too resurgent teams in Wash St and Tulane and a very steady Navy squad.

Even though it may be by slight technicality, Michigan does not have an FCS team on their schedule (App St will be a first-year Sun Belt member in 2014). I think that has to count for something. Also you can’t blame them for not knowing that Utah wouldn’t be able to hang in the Pac-12. Miami U is awful though.

Where is Ohio State?