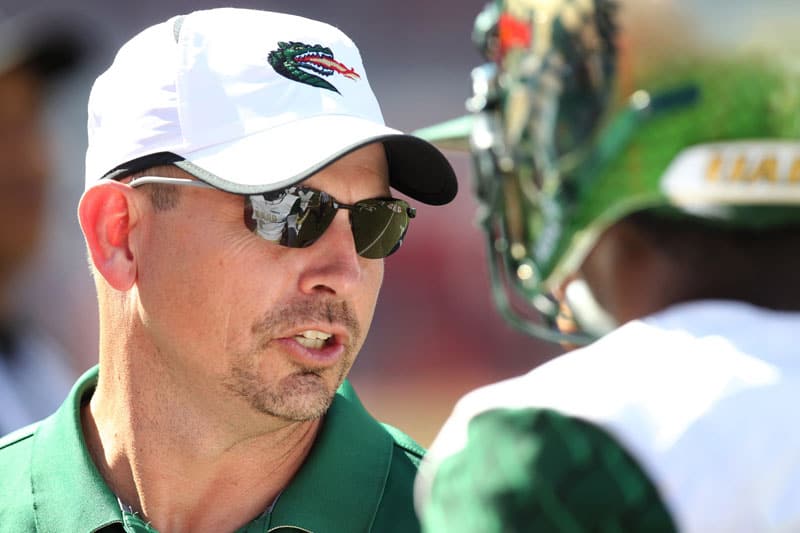 For some college football programs, receiving a call from a bowl committee is a bigger deal than for others.

Where schools like Oklahoma and Ohio State expect a golden envelope containing a bowl bid to magically show up in their mailboxes, the folks at places like Central Michigan are still in the practice of standing down at the end road on the edge of campus, waiting for the mailman.

As is this case in life, all things are relative in college football. So where an invitation to the Royal Purple Bowl in Las Vegas is one team’s ticket to tribulation, it’s another school’s cause for jubilation.

Here’s a look at five teams that are just one little win away from pay dirt. Each has suffered from at least a three-year postseason drought, meaning that they haven’t played in a bowl game since 2010 or earlier.

Akron’s game at Kent State next Friday night, Nov. 28, is all that stands between it and its first postseason game since losing to Memphis in the 2005 Motor City Bowl.

Despite the bowl loss, the Zips went 7-6 that year, capturing a MAC title by edging Northern Illinois 31-30 in the conference championship game.

Kentucky’s got its work cut out for it to break its three-season bowl drought: The Wildcats must travel to Louisville the Saturday after Thanksgiving and beat their in-state rivals for the first time since 2010.

If the No. 24 Cardinals are still ranked, it will also mean winning its first game over a ranked opponent since upsetting No. 10 South Carolina back in 2010.

The Wildcats last win over a power-five team in the postseason came just one year earlier, in 2007, when they whacked Florida State 35-28 in the Music City Bowl.

Another SEC squad on the verge of a postseason bid, Tennessee has got two shots to make its first bowl game since 2010: Beat No. 20 Missouri at home this Saturday, or win at Vanderbilt next week.

Though Tennessee ought to be able to handle 3-7 Vandy in the finale, it has lost its last seven straight to ranked opponents, last beating No. 11 South Carolina 23-21 in 2013. This makes a win over Mizzou seem like less than a foregone conclusion.

This year, Texas State has games with 6-4 Arkansas State (Thursday, Nov. 20) and 1-9 Georgia State (Saturday, Nov. 29) remaining. Securing even one win would make a postseason destination like the Camellia Bowl in Montgomery, Ala. realistic.

This would be a huge win for a program that was playing in the FCS Southland conference just a few seasons ago and progressed to being seven-points shy of knocking off Illinois on the road this year.

Though the other four programs on this list are fighting for bowl-eligibility, UAB is also fighting to keep its football program.

Though a bowl appearance might not save the Blazers, it certainly wouldn’t hurt.

UAB’s got two whacks left at what would amount to only its second bowl game in program history: First, it’s got undefeated Marshall at home this Saturday and next week it’s a visit to Hattiesburg to face three-win Southern Miss.

Not included on this list are: Appalachian State (5-5) and Old Dominion (4-6), both of which moved up from the FCS this season and will therefore have to wait until 2015 to be bowl eligible.

It would be nice to see UAB go to another bowl & build the program so it can compete against the big boys. Not seeing UAB beating Marshall this week but may be a win next week against S.Miss. UAB has been known to keep some games close with FSU, The Ohio St, Nebraska in the past.

With the Alabama Board trying to cancel UAB football, a bowl birth and a much improved season would certainly help the program stay alive. They need support from the B’ham community, which they are getting now. Sadly, the Board in Tuscaloosa has always been trying to keep UAB down.

Yeah, I remember when UAB as trying to pass the new football stadium on campus & board members said no. I know it cost money & I respect Legion Field & the memories but I do feel the Blazers need their own stadium. May be some day.

Dear Harold: “a bowl birth” As an MD I’ve seen many “births” but not a bowl being born. The word you are looking for is “bowl BERTH.”

I wonder if Georgia Southern will get a slot since they are in the same transitional boat as App St and Old Dominion. They already have 8 wins though and should share the Sun Belt title with UL-L. I imagine there won’t be quite enough bowl-eligible teams and GA Southern will get a bowl nod.

Old Dominion can be bowl-eligible this year. They’re a year ahead of the other schools in the transition process, and C-USA voted awhile back to let them compete for a league title and/or bowl bid this season.

The NCAA should revise the bowl eligibility rules so that you have to go at least 6-5 against FBS teams. Therefore, if you go 6-6, but one of those wins is against FCS, you can’t go bowling. However, if you go 6-6, but one of those losses is to an FCS teams, you are still bowl eligible since you were 6-5 against FBS. If they cut about 5-10 bowl games, then all teams with this criteria should fit.
Also, if you go 6-6, and end up playing in a conf champ game, and lose, then you can only go to a bowl if you were not the #1 team in that division. (Example: 2011 UCLA finished 6-6 and 2nd in P12 South; USC was first but was postseason ineligible. 2012 GTech finished 6-6 and 2nd in ACC whatever division they are in, but Miami was postseason ineligible. Both those teams lost in their conference championship games, but got to go to bowls because they were unnecessarily placed in the conf champ game.

When you need over 60% of the teams in FBS to fill the bowl slots, there are too many bowls. Sooner or later, title sponsors and advertisers are going to say, “This is a waste of our money”.

If that day ever comes. Keep in mind there are bowls being added every year due to more teams coming into the FBS, I don’t really have a problem with the bowls. Gives a team, coaches, fans & the University something to look forward too & have a goal to reach at the end of the year.

Kind of like automatic promotion from “5th to 6th grade even if you are a dumb as a brick,failed every class but you parents protested that to hold you back would damage your self esteem. Until we see a requirement that power 5 teams need at least 6 wins against other power five teams then you will continue to bowl inflation. The SEC would never support this because the bottom half of that league on wins 2-3 games a year against quality teams and 3-4 more a faint the UT/Marin, Georgia State and Samfords.

” The SEC would never support this because the bottom half of that league on wins 2-3 games a year against quality teams and 3-4 more a faint the UT/Marin, Georgia State and Samfords.” Don’t forget the AAC BIG12, ACC & PAC12 that have preyed on these teams as well to get extra wins.

What garbage. These are all mediocre teams. Bowl bids mean nothing these days. Wow. 6-6. Bowl eligible. Pffft.