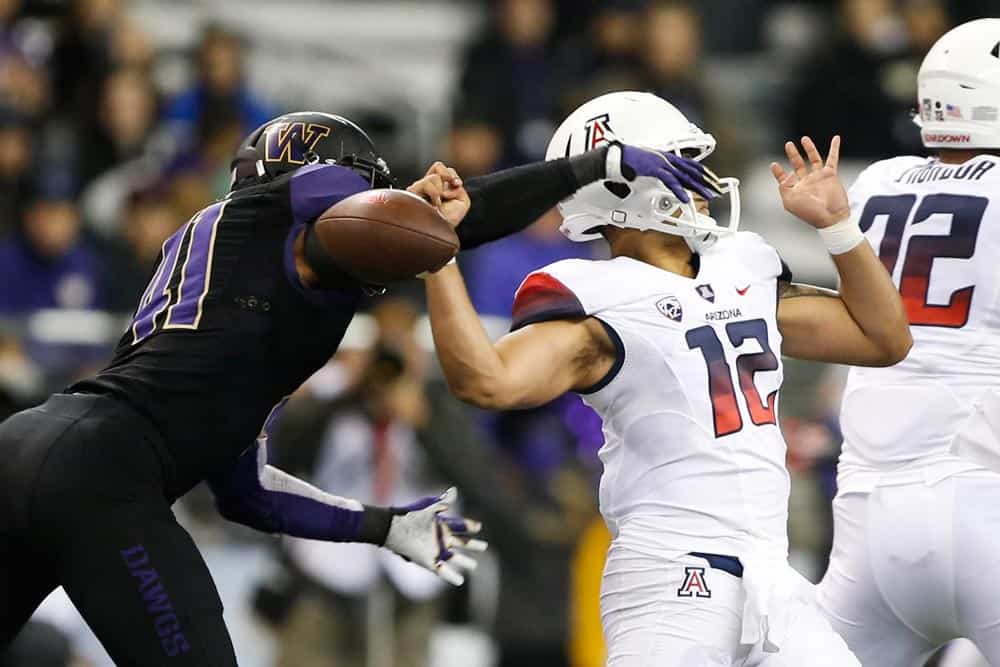 Week 4 of the 2016 college football schedule is jam-packed with 59 games—one on Thursday night, three on Friday night, and a super-Saturday featuring 55 contests.

It’s the least amount of games played in any week thus far, the number driven down by a whopping 17 teams taking the week off.

The Big Ten and Mountain West both kick-off conference play in Week 4. The Big Midwesterners have four league games on tap while the Mountain Men have one—Air Force at Utah State.

Contests featuring two ranked teams are static at four, the same number as last week and Week 1. Week 2 holds on as the only week thus far not to feature a ranked vs. ranked match-up.

Here’s a wild ride through the Week 4 slate. As always, the facts are unique to this week and are limited to FBS vs. FBS action.

Cincinnati and Miami (Ohio) play for the 121st time this Saturday afternoon. The series dates all the way back to 1888, the same year Dutch painter Vincent Van Gogh cut off his left ear and sent it to a prostitute for safe keeping.

The two have met consecutively since 1945, Cincinnati hasn’t lost to the Redhawks since 2005.

6:  Oregon has won 6 straight over Colorado.

MOST-LIKELY WEEK 4 WINNERS BASED ON HISTORY (FBS vs. FBS only):

According to legend, the original Victory Bell was taken from Miami’s campus by Cincinnati fans in the 1890’s, establishing the tradition of the winning team retaining the bell. Today, the original bell is back on Miami’s campus with a replica bell awarded to the winner of the annual game.

According to Louis Ojeda Jr. at Fox Sports Southwest,

“The tradition of the ‘Battle for the Iron Skillet’ began in 1946 to prevent vandalism by fans a year after more than $1,000 in damage had been done to both TCU and SMU campuses. But why a piece of cookware? There’s a myth that it was sparked by an SMU fan who was frying frogs’ legs in a skillet at a tailgate. The tradition died over the years, but it was revived in 1993 with the introduction of a new Iron Skillet.”

The last time the visiting team won an Arizona-Washington game was in 2007, when the Wildcats outlasted the Huskies 48-41 in Seattle.

Since then, Arizona has dropped four straight at Husky Stadium and No. 9 Washington has lost four consecutive in Tucson.

This Saturday night’s game is at Arizona Stadium.

Baylor’s home game against Oklahoma State this Saturday night is the first time it will have faced a Power 5 team since knocking off North Carolina in the Russell Athletic Bowl last December.

The Bears opened this season with wins over Northwestern State, SMU, and at Rice.

Bowling Green’s road trip to square off with Memphis on Saturday night is the only time it will leave its home state other than a Week 10 date at Northern Illinois.

After scoring their first-ever win against a Big 12 foe earlier this season, the Chippewa’s get a shot at an even bigger feat in Week 4.

CMU was 0-3 vs. the current Big 12 going into their Week 2 game at Oklahoma State vs. a 0-13 mark all-time against the ACC coming into this Saturday’s clash at Virginia.

Despite winning four of its last six meetings with Georgia Tech, No. 5 Clemson hasn’t beaten the Yellow Jackets in Atlanta since 2003.

The two schools meet at Bobby Dodd Stadium this Thursday night at 7:30pm EST on ESPN.

In perhaps the most jaw-dropping stat of Week 4, No. 3 Louisville hasn’t beaten Marshall since scoring a 36-0 shutout in 1981.

The Cardinals went 5-6 as independents that season while the Thundering Herd struggled to a 2-9 mark as members of the Southern conference.

Since then, Louisville dropped regular-season games to Marshall in 1987 and 2011 and postseason clashes in the 1998 Motor City Bowl and the 2002 GMAC Bowl.

Not only have the Boilermakers never beaten a current member of the Mountain West conference, they’ve only played one such opponent in their 119-year football history.

That game was in 2006, when Purdue traveled to Hawaii during the final week of the season and lost 42-35. Despite that, the Boilermakers managed an 8-6 mark that year including a loss to Maryland in the Champs Sports Bowl.

The Commodores road trip to Western Kentucky this Saturday afternoon is the back end of a home-and-home series that started last season. Vandy dropped that game 14-12 at home.

It was the first time the two schools had met in 78 years. The Commodores won all three previous meetings, all in Nashville, all while WKU was a member of the Southern Intercollegiate Athletic Association.

Wisconsin kicks off its own version of Murderers’ Row

No other Big Ten West program has a tougher cross-division schedule than No. 11 Wisconsin, which not only drew the most difficult three teams from the East, it got them consecutively.

Well, it may be another long week for Purdue & Vandy again.
I thought Wisconsin was going to have it rough this year & I can see Clemson getting over that hurdle by beating Ga.tech.
Oklahoma needs a week off after the start of this season.

I really wish you would exclude match-ups with less than 4 games for the most likely to win section. A whole slew of 1-0s is pointless and provides no interesting information (somebody had to win the first game).